BACK TO ALL NEWS
Currently reading: 2017 Suzuki Swift on sale in June priced from £10,999
UP NEXT
Mini Recharged project to electrify brand's classic models

Suzuki's Ford Fiesta rival switches to the same platform as the larger Baleno, but it's actually marginally shorter than the car it replaces. It also has a slightly lower roofline but a longer wheelbase. Wider use of ultra-high-strength steels in its construction has contributed to a significant weight saving for the car, with entry-level 1.2-litre-engined versions weighing 890kg, some 120kg less than their predecessors.

Interior space is up by 25% and luggage storage space has grown from 200 to 254 litres. Access is also improved thanks to a body optimised for a five-door layout – the only format available with the new model – with rear door handles hidden ahead of the car’s C-pillars.

The car's base price is £2000 more than the old model but the new Swift gets a significantly longer technical features list. 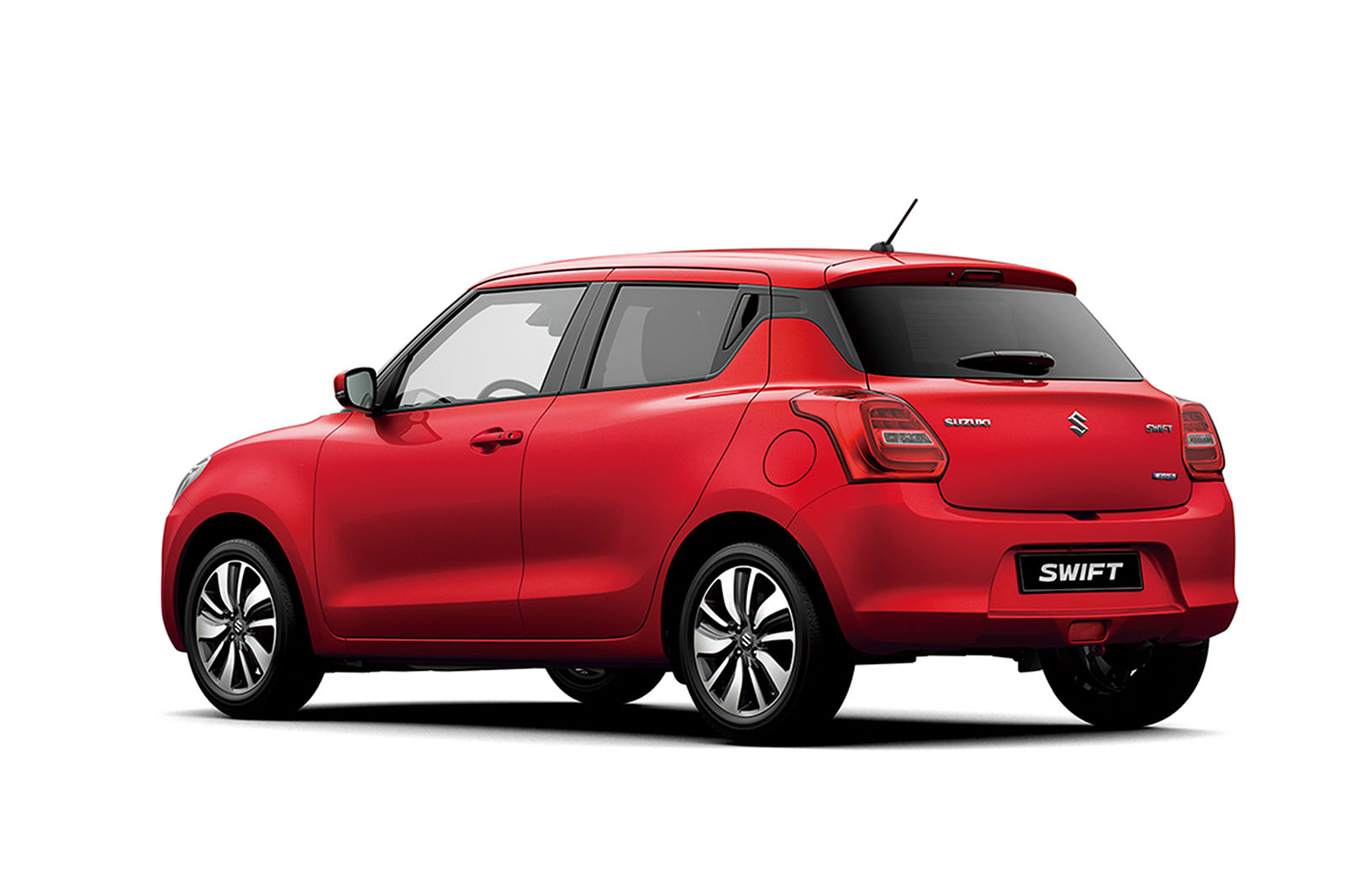 In entry SZ3 guise it uses a Dualjet 1.2-litre four-cylinder engine that produces 89bhp and offers 65.7mpg while emitting 98g/km. Six airbags, air conditioning, a leather-wrapped steering wheel, digital radio with Bluetooth and front electric speakers come as standard inside, and the exterior gets LED day running lights and 15in alloy wheels.

Higher spec SZ-T cars cost from £12,999 and gain the option of a Boosterjet 1.0-litre three-cylinder engine with 109bhp on offer. CO2 emissions for the turbocharged unit are 104g/km and combined fuel economy is 61.1mpg. A rear-view camera, 7in touchscreen with MirrorLink, Apple CarPlay and Android Auto smartphone mirroring, 16in alloys and fog lamps are added to this trim.

Top of the range is the SZ5, which is priced from £14,499 and gets an extra mild-hybrid powertrain option. Using the Boosterjet unit and an integrated starter motor, it can generate electricity through regenerative braking and trims CO2 emissions to 97g/km. Due to its compact nature, the hybrid system adds just 6.2kg to the powertrain’s weight. An optional four-wheel drive system, Allgrip, can be fitted to SZ5 models with the 1.2-litre engine.

A five-speed manual is standard but Suzuki also offers a six-speed automatic with the 1.0-litre engine. 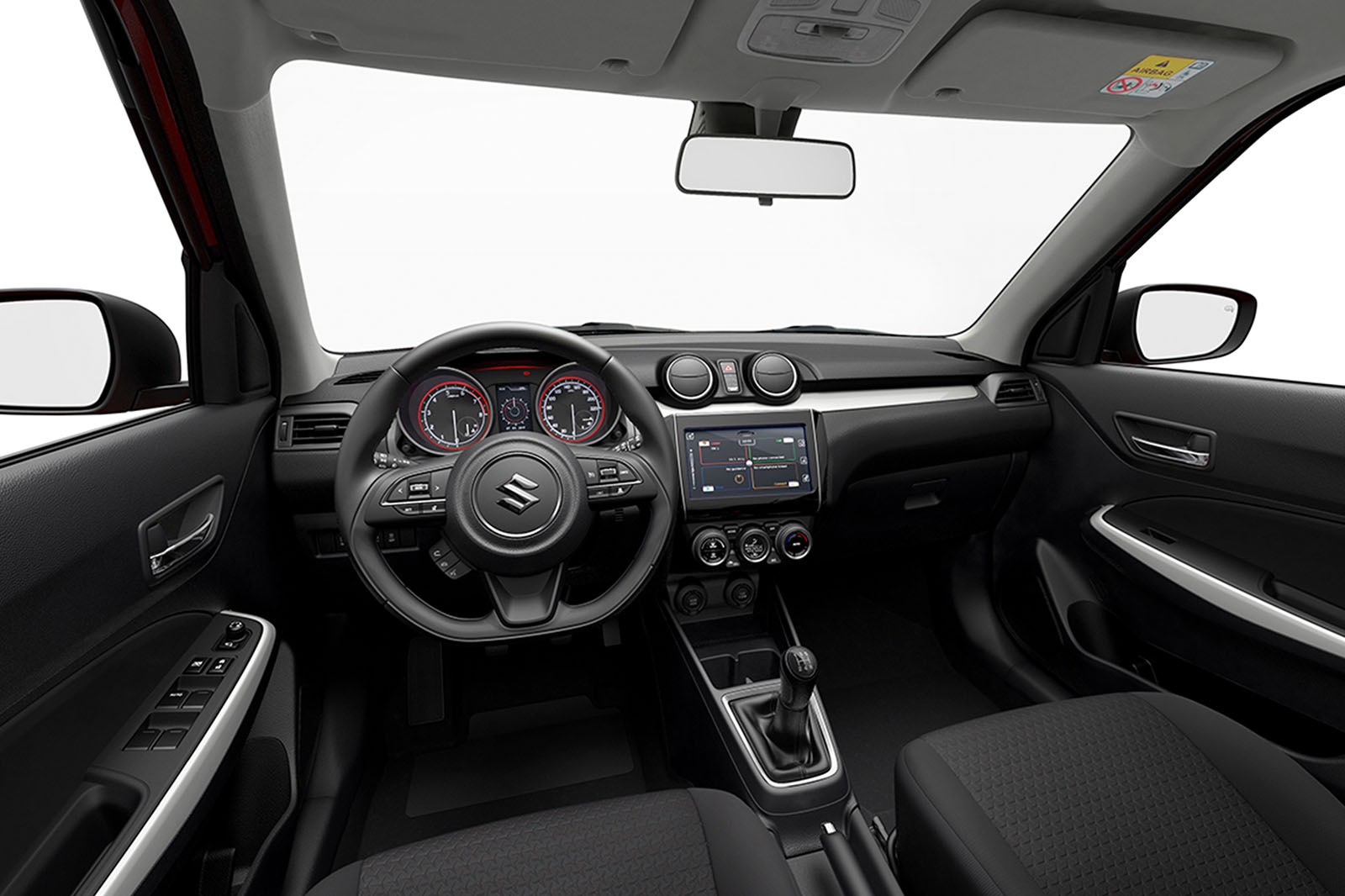 The Swift SZ5 also gets a 4.2in LCD display in place of instrument dials. It comes with new driver assist technology including a forward detection system that uses a monocolour camera and laser sensor that can see in the dark. They first provide the driver with a visual and audio warning when an impact is likely, before triggering autonomous emergency braking that can maximise brake pressure to avoid an impact. The technology offers lane departure warning and high beam assist, and an additional radar device enables adaptive cruise control.

Suzuki is hoping that a focus on core strengths, together with a reappraisal of some long-standing weaknesses, will carry the new third-generation supermini to a 40% sales volume improvement in the UK, which is already the car’s biggest single European market.

Suzuki chief engineer Masao Kobori told Autocar that chassis development on the Swift has been done extensively on UK roads as well as in Spain and Germany, and that the Fiesta had been Suzuki’s key benchmark for the Swift’s handling.

“We believe we have matched the Fiesta’s handling, but the Swift does not have the same handling feel as the Ford because it is a much lighter car,” Kobori said. “We have expended every possible effort, in every area, to save weight, which also sharpens the car’s handling, and we have wider axle tracks, a lower driver’s hip point and a lower centre of gravity.”

When you consider its weight, the entry 89hp car could be all you'd need, mazdas 89hp 2 is quite quick with the 0-60 dash in under 10 seconds and I don't think it is as light as this, which when you consider the current swift sport is just under 9 seconds, the new low weights look really good for this to be a sprightly fun little hatch.
xxxx 28 April 2017

Agree with you on the 0-60 times. One thing you have to remember with Suzuki is they understate their stats(opposite to VW in some cases) the 1.6 Vitara comes in at 2 seconds quicker in the Autocar mag 0-60 test than what Suzuki state in their Brochure.
Zeddy 27 April 2017

You got to hand it to Suzuki they really are the kings of the small car,no other manufacturer offers so many choices the city car/supermini field. The Baleno,Celerio,Ignis,Swift and pushing it a bit the Jimny are excellent value even when you factor in the devaluation of the pound since last year and I can see why that the company has deleted the entry level SZ2 Swift and only offering the car in five door form mitigates that price rise. The new car looks fine it's lower stance makes it look wider than the outgoing model,my only quibble is that the look of the front of the car to me looks rather strange almost like an angry teddy bear but I'd like to see what it looks like in the metal and in different colours as well. The interior is typical of Suzuki very plain but functional the fabric & plastics look of much better quality than before. in in all it looks like yet another winner for the company,I look forward to the Sport coming out hopefully in the not too distant future.
View all comments (12)