The four-cylinder diesel E 220 d has 191bhp and 295lb ft of torque, along with a combined fuel economy figure 67.3mpg and 109g/km of CO2 emissions. Mercedes' nine-speed automatic gearbox is standard.

The starting price remains fairly close to the £36,660 of today’s best-selling model, the E 220 d Estate, but more expensive than similarly equipped versions of the BMW 5 Series Touring and Audi A6 Avant, which cost £36,365 and £35,875 respectively.

SE trim on the E-Class Estate gets features such as sat-nav, chrome roof rails, DAB radio and 17in alloys. Upgrading to AMG Line brings 19in alloys and black ash wood trim inside with AMG sports detailing. 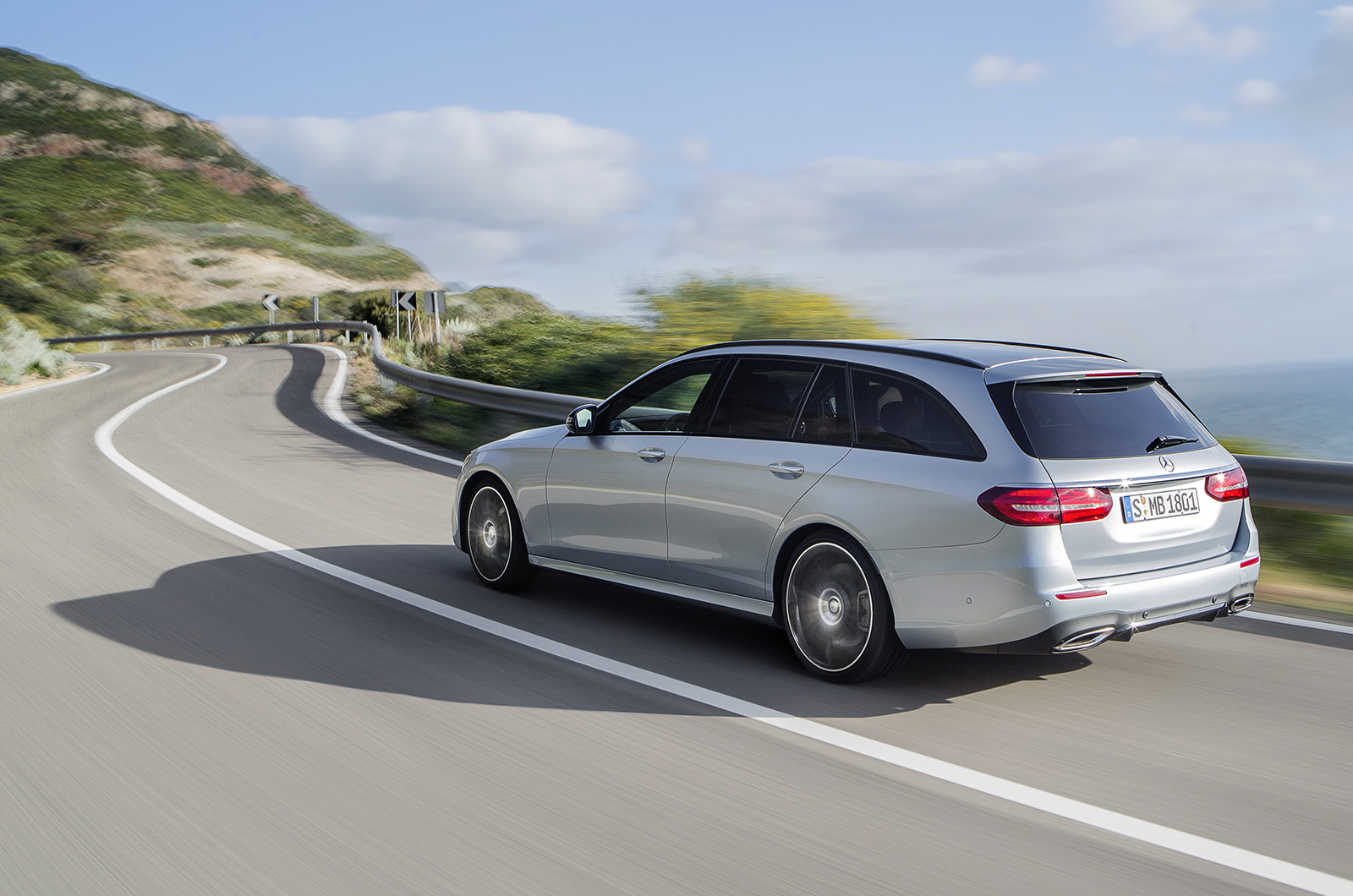 The entry-level 148bhp E 200 d engine won't be used in the E-Class Estate, and will instead be added to the E-Class saloon range.

The E 350 d and AMG E 43 versions will join the range in October this year, and pricing will be announced then. The E 43 is expected to get 396bhp. A seven-seat version, which will be launched later, has also been confirmed.

An AMG E 63 looks set to top the range with a power output of 563bhp, rising to 603bhp for the E 63 S version, both with Mercedes' 4Matic all-wheel drive system.

The new estate is a typically commodious but slightly less accommodating model than its strong-selling predecessor.

First deliveries are expected towards the end of October, the new Audi A6 Avant and BMW 5 Series-rivalling load hauler following the recently introduced new E-Class saloon into showrooms.

The front-end design, from the bonnet to the back edge of the front doors, is shared with the E-Class saloon, but the roof is fitted with aluminium roof rails. Unlike recent E-Class Estate models, the tailgate is angled slightly and there’s now greater tapering towards the rear, providing a less boxy shape than before.

As with its saloon sibling, there are two separate grille treatments. Base and Exclusive Line trim models have a classic chromed treatment, while Avantgarde and AMG Line trim models get a more sporting look with a large three-pointed star in the middle of the grille.

Inside, the cabin is virtually identical to that of the latest E-Class saloon, with an optional dual-screen instrument and infotainment system dominating the dashboard.

With the standard 40/20/40 split rear seats folded away, load capacity increases to 1820 litres - 130 litres less than before. An electric lever in the luggage area can be used to automatically fold the rear seat backrests down without the need to climb inside, although even with the backrests folded, the forward part of the luggage compartment floor is not completely flat.

Despite the reduction in overall luggage capacity, Mercedes-Benz claims the new E-Class Estate has lost little in terms of practicality. At 1100mm, the loading width between the rear suspension domes is sufficient to accommodate a standard European pallet, according to the German car maker.

As before, an electric-powered cargo blind comes as standard. It motors upwards when the tailgate is opened to ease access to the luggage compartment without the need to fully retract the cargo blind each time.

Another standard feature is a so-called Easy Pack tailgate with electro-mechanical operation for one-touch opening. There is also an optional remote opening feature offering hands-free access as part of an improved Keyless Go function. It uses a sensor to allow the tailgate to be opened by moving your foot under the centre of the rear bumper.

As with the old E-Class Estate, the new model features rear air suspension as standard. It provides automatic self-levelling, allowing a payload of up to 745kg and a towing capacity of up 2100kg, depending on the model. Mercedes-Benz has reworked the tow ball coupling for its latest load hauler, providing it with standard electric control. 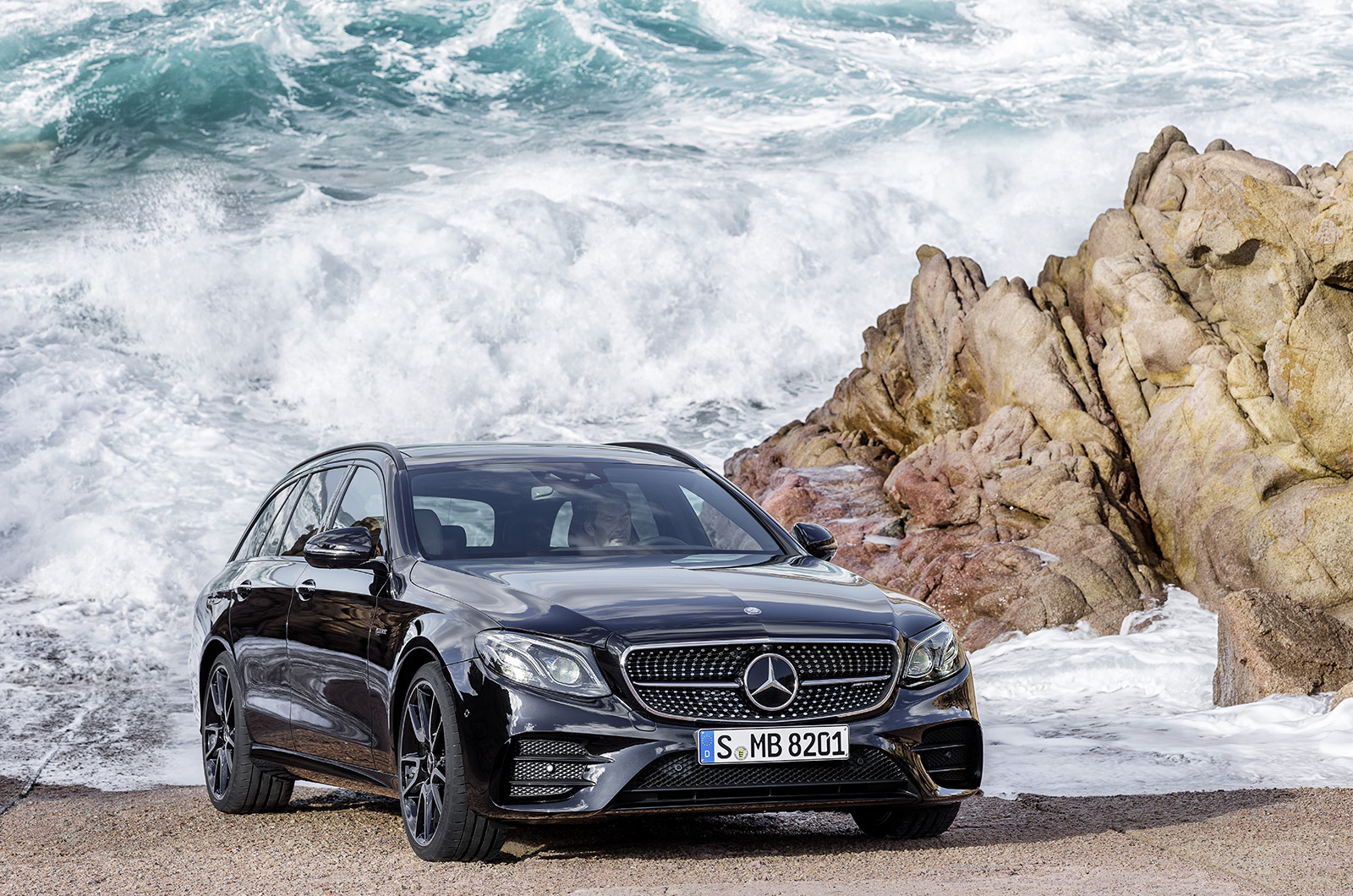 The next AMG E 63 is expected to be revealed later this year, although sales will begin in 2017, with 4Matic all-wheel drive as standard. Although the previous range-topping AMG was a small seller – only 100 estates were sold in the UK last year – it’s seen as being a halo model for the company’s other estates. Other 4Matic versions will follow.

Historically, the E-Class Estate has accounted for around a quarter of all E-Class sales in the UK.

I thought the AMG part of Mercedes branding was something a bit special, now you can have the suffix for £2,500 over the base model!
TS7 25 July 2016

...denotes a trim level, MB-AMG (followed by the range, such as A,C,E etc) and two digits (45,43,63 etc) denotes a 'proper' AMG - although MB-AMG fanboys get their knickers in a twist about the '43 models - and the trim line for that matter.

This how Mercedes define it, on their AMG website "Driving Performance' describes the two core elements of our brand. First, the power delivery, handling and sound – in other words, the elements that define the unique AMG driving experience. And secondly, our claim to be the innovator in the high-performance segment." i.e. you should expect a bit more than higher trim

A touch of class

better looking than the Saloon

While i like the saloon the wagon version really does look great. really is one of the best looking luxo wagons currently, along with the new Volvo wagon.