BACK TO ALL NEWS
Currently reading: 2016 Infiniti QX30 pricing confirmed
UP NEXT
Why last-mile delivery EVs are big business for car and retail firms

Infiniti's first premium crossover model will go on sale in the UK this summer, priced from £29,490
Open gallery
Close

Infiniti has revealed the pricing of its new QX30, which is due to go on sale this summer to rival premium compact crossovers, such as the Audi Q3, BMW X1 and Mercedes-Benz GLA.

At launch, the QX30 will be available in two trim levels and with a 170hp 2.2-litre diesel engine with all-wheel drive and a seven-speed dual clutch transmission. Prices for the QX30 start at £29,490 for Premium spec and rise to £33,370 for the QX30 Premium Tech.

Described as being created “for a new generation of premium buyers”, the production QX30 sticks closely to the concept car that was unveiled at last year’s Geneva motor show.

Infiniti says the car’s styling, which incorporates muscular bumpers at either end and features the firm’s mesh grille at the front, showcases its “design-led approach to product development”. The QX30 is the sister car to the Q30, Infiniti’s premium hatchback, which went on sale in the UK earlier this year priced from £20,550. The two cars will be built together at Nissan’s Sunderland plant.

The compact crossover sits up to 45mm higher than the Q30, with a total height of 1530mm; it also features wider wheel arches.

Given that all-wheel drive is standard on the QX30, it’s likely that only engines currently offered in AWD form on the Q30 will be offered with the crossover. That means a 208bhp 2.0-litre petrol should join the 2.2-litre diesel later on. 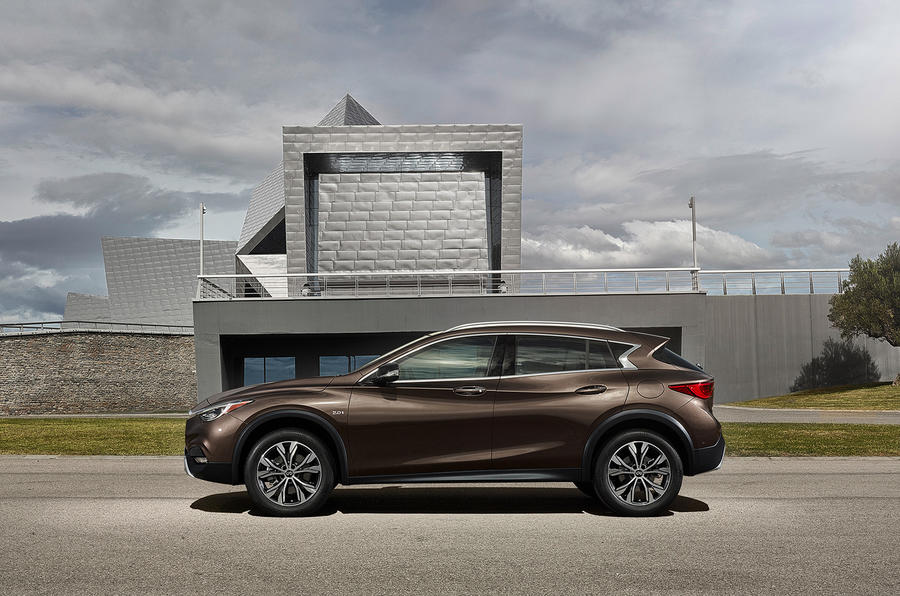 Infiniti says the crossover has been engineered to provide “a confidence-inspiring, dynamic driving experience” and features intelligent all-wheel drive. All engines will be mated to Infiniti’s seven-speed dual-clutch automatic transmission as standard.

While the QX30 is based on the smaller Q30, it comes with bespoke tuning settings for its ride and handling. It features stiffer springs and a new rear anti-roll bar, which Infiniti says allows the QX30 to “remain comfortable at all speeds and over a variety of road surfaces”.

The QX30’s cabin is also claimed to be one of the quietest in the segment. The car will come with safety technology including an Around View Monitor, adaptive cruise control and parking assistance systems, with most functions controlled via the 7.0in touchscreen infotainment system.

Infiniti design boss Alfonso Albaisa said: “The category-defying design of the QX30 stays true to the inspiration behind the daring 2015 concept. Its mix of artistry in the flowing lines, and power in the elevated stance and confident look, makes a bold visual statement and challenges current preconceptions of what a crossover should look like.”

Speaking at the car’s unveiling, Infiniti president Roland Krueger said: “With our recent sales successes and record growth, the current product offensive will further strengthen Infiniti’s global market position. The active crossover, QX30, joins our new premium compact family and will broaden our offer to new customers around the world.” 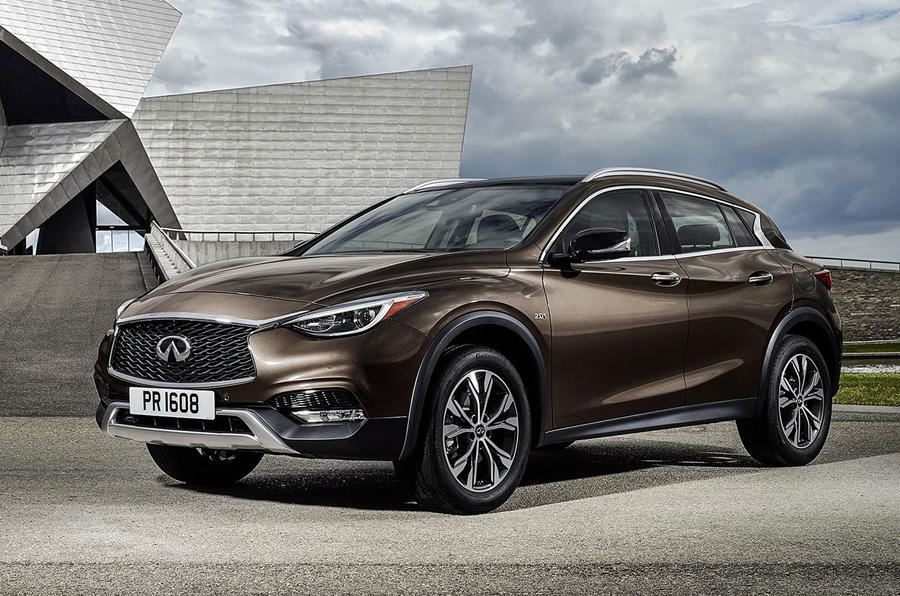 Alongside the Q30, the QX30 will be crucial for Infiniti as it strives to compete with premium German manufacturers, and introduce more models to its range. It’s already known that Infiniti will introduce a sports coupé based on the Q60 concept car next year, while a range-topping model based on the Q80 Inspiration concept car is also planned. A new entry-level model, dubbed Q20, is also on the cards.

Infiniti sold 173,000 vehicles worldwide in the first 10 months of 2015, with particular growth in China and the US. The addition of a mass-market crossover should help Infiniti to cash in on what is one of the fastest-growing segments in the marketplace.

Would rather negotiate a cracking deal on a Cashcow or X-trail. But thats just me.
tuga 18 November 2015

What is an Infiniti

Why would you buy one? What is this brands USP?
superstevie 18 November 2015

The styling suits this better

The styling suits this better than the standard hatch. Better looking the Merc GLA