BACK TO ALL NEWS
Currently reading: New Citroën C3 - first spy pictures
UP NEXT
Analysis: Polestar lifts the lid on lifetime EV emissions

The new Citroën C3 has been spotted testing for the first time ahead of its launch later this summer.

The hatchback has the goal of accelerating the success of the C4 Cactus in reinvigorating the brand and winning customers over with its exaggerated styling and its focus on interior space, comfort and technology.

The new C3 has been revealed - take a look here

As such, it will take direct styling cues from the Cactus, including a reworked Airbump design on the side of the car - which is difficult to distinguish in this early prototype - and a distinctive nose design.

Crucially, the C3 is the best-selling Citroën globally and bosses hope the introduction of the new-look, more stylised version of the car will help the brand gain further sales momentum as it bids to transform its image from staid, middle-market car maker to one that wilfully polarises opinion about the car’s look and driving qualities.

“The research suggested that we were ending up third, fourth or fifth on too many buyer’s shortlists,” said Citroën CEO Linda Jackson, talking about the Cactus. “We wanted to make a car that some people would love and that some people would perhaps not love - and be happy with the fact that those who loved it would actually buy one. So far that policy has been a success, and it’s no secret that we intend to learn from that and apply some of the lessons we have learned to other cars in our range.”

The decision to introduce elements of the Cactus’s look throughout the Citroën range reflects a new-found confidence at the brand, kickstarted by an overhaul led by British designer and Autocar’s Sturmey Award winner Mark Lloyd and inspired by an ongoing mission by Citroën’s management - led by Jackson and PSA Group boss Carlos Tavares - to reinvoke some of the qualities that prompted the brand’s past glories.

The Cactus was launched in 2014 and last year - its first full year of production - it hit just under 80,000 sales in Europe after manufacturing capacity was increased to meet demand. Crucially, Citroën insiders also say the level of discounts given on the C4 Cactus are substantially smaller than it has historically given on recent cars in its range, significantly raising profitability.

“Our future products are about being different and making the owners feel good,” said Jackson, without specific reference to the C3. “Our key priorities are designing cars that people immediately know are Citroëns, that are the most comfortable cars in their class, from the quality of the seat to the set-up of the suspensions and including everything from having more storage than rivals, more light in the cabin and sometimes features that even improve air quality. The Cactus’s larger glovebox is a great example of that innovative thinking - by putting the airbag in the roof, we have freed up a lot of useful space. 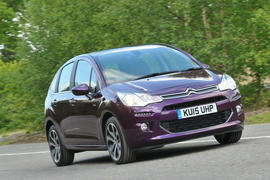 “Finally, we will apply useful technology to the cars - and by useful I mean technology that people will actually use, rather than having it for the sake of it. Many of our petrol and diesel engines are class-leading, we can see the advances in connectivity making owner’s lives better and we believe we have some interesting innovations around the central screen and how it can be used by the driver and passengers in future.”

Underneath, the new C3 will remain on a modified version of the PSA Group’s PF1 platform. Although a new small car platform, to be called EMP1 in Europe and CMP in China, is under development with Chinese partner Dongfeng for launch around 2018, bosses argue that the current platform still has plenty of potential to meet class-leading standards, and that it and ancillary parts can be tuned to meet Citroën’s stated goal of making cars that are “comfortable and relaxing as opposed to trying to be sporty”. To boost that goal, Citroën has also pledged to fit “the most comfortable seats in every class” in its cars in future. Although slightly lower and wider than the existing C3, the new car will still be just under four metres in length, in line with the class norm.

Conversely, the C3 will spearhead Citroën’s renewed World Rally Championship programme in 2017, with the new car being tested in France earlier this month in heavy livery to disguise its looks. Citroën’s management is believed to have approved the rally programme as it attracts a younger audience to the brand and highlights its ability to show the brand in a way that challenges expectations, as well as the durability and capability of its cars.

The production C3’s engine line-up will carry over from the current car and feature the PSA Group’s latest Blue HDi 1.6-litre diesel and Puretech 1.0 and 1.2-litre three-cylinder petrol engines, as it bids to maintain its place at the head of the overall CO2 emissions league tables - a position which is the envy of the wider industry, particularly as they have been achieved without recourse to the hybrid or plug-in hybrid technology that would significantly raise the price of the cars.

Prices of the new C3 are expected to rise slightly from current levels, which start at just over £11,000 prior to the substantial discounts which have since had to be applied to the car.

Pledged to fit the most comfortable seats

21 April 2016
You'd think after 100+ years of car making, we'd have arrived long ago at the most comfortable seats and all cars would have had them for years. And if they know how to make the most comfortable seats, it's pretty shameful that they haven't been fitting them all along. I applaud Citroën's design ambitions, but the great Citroëns of the past were engineering led and today's models are just dressing up a very conventional platform. Perhaps the mysterious special new suspension they talked about a little while ago will improve matters.

21 April 2016
"from the quality of the seat":- I receive lifts in the current shape A3 and although it's a great car I just can't get comfortable, yet I've never read a review which mentioned seating discomfort. If only reviewers spent more time on seating comfort than how controllable it is when drifting then maybe the German brands wouldn't be quite so far ahead in the sales charts.

Very interesting to read the

21 April 2016
Very interesting to read the Marmite styling idea as being a good thing. I might think that tranferring some of the unique design cues from the Cactus into other models removes the uniqueness. Therefore would it not be better to be even more radical and create different models with distinct, different and radical looks to ensure diversity in the range. Whilst some may not like model A, they do like Model B. Plus, this approach makes it harder for other manufacturers to copy the good bits, thus cancelling out the uniqueness further. Still, smarter people than me make these decisions so I am sure they will do what is cheapest.

21 April 2016
If the C3 is to be made as stylish as the Cactus (which of course is a good thing) where does that leave the DS brand?

I was surprised to read that

21 April 2016
I was surprised to read that the C3 is Citroens best selling model globally. It must sell far better in other markets than it does here, I see far fewer current C3s around than I do of its predecessor.

I was surprised to read that the C3 is Citroens best selling model globally. It must sell far better in other markets than it does here, I see far fewer current C3s around than I do of its predecessor.

If you look at the sales charts in France, which are vastly different to here (Ford and Opel barely feature), the C3 usually makes the top five each month, though it's a long way behind in sales numbers the Peugeot 208, currently No 1 best seller, and the Renault Clio, which is No 2. The C4 Cactus, on the other hand, hasn't been selling that well in France and is well down in the bottom part of the top 25 best sellers. So maybe the Cactus styling theme isn't such a great idea.

But if those sales are all profitable, then where's the issue? Better to sell more profitable cars in smaller numbers than flooding the market and making very little or a loss on it