BACK TO ALL NEWS
Currently reading: 2016 Audi S4 Avant revealed
UP NEXT
Motoring heroes: the most inspiring people in the car industry

Audi’s 2016 S4 Avant has been revealed at the Geneva motor show, with a new 3.0-litre V6 engine that promises improvements in performance and fuel economy over the outgoing model.

The S4 now produces 349bhp and 369lb ft of torque, delivered to all four wheels through Audi’s quattro all-wheel drive system, giving a 0-62 time of 4.9sec and a top speed limited to 155mph.

The S4 Avant, with its turbocharged 3.0-litre V6, also achieves a claimed fuel economy of 37.6mpg and 175g/km CO2 emissions, compared with the 38.1mpg, and under 170g/km CO2 Audi claims for the S4 saloon, although Audi has stated that these figures are not yet officially confirmed.

Audi says the new engine is considerably lighter than that of the previous S4, which helps to improve fuel economy. It is coupled to an eight-speed tiptronic gearbox, while a self-locking differential manages the power distribution; 85% of the power can be sent to the rear axle, and 70% to the front, while the standard set-up sends 60% rearward. An upgraded diff is available as an option.

The S4 Avant, like the S4 saloon, has a new five-link suspension designed to improve stability at high speeds, as well as sharpen up the car’s handling.

As is the tradition with Audi’s S-badged performance variants, styling is only mildly tweaked from that of the A4. Subtle front air intake revisions and S4 badging at the front, quad-exhausts emerging from a metal-tone lower bumper at the rear, and upgraded alloys are the main features marking out the S4.

Boot space in the S4 Avant matches that of the A4 Avant, at 505 litres, or 1510 with the rear seats folded. This is an increase over the 480-litre capacity of the previous S4 and A4 saloon.

The S4 and S4 Avant feature S-badged, diamond-stitched Nappa leather upholstery as standard, in black, grey or red. Upgrading to S sport seats adds integrated headrests, bolstering adjustment and a massage function. The dashboard is finished with aluminium trim, with the option of Audi’s virtual cockpit on a 12.3in screen in the place of traditional dials. 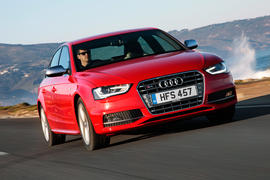 Audi's S4 packs a supercharged 328bhp punch, but it's not the most engaging high-performance saloon on the market

Compared to the RS4

24 February 2016
it's nice and understated 'till you put your down.

25 February 2016
Totally gob smacked by the size - leviathan monster yet not in your face SUV style and those wheels wow ...I want one!!!

25 February 2016
My view was obscured somewhat by traffic as it was parked on the other side of the street - now was it the estate version or was it the new allroad?? Side on that is very difficult to catch - but it is beautiful