The facelifted Hyundai ix20 compact MPV has been spotted testing ahead of a likely debut at the Frankfurt motor show in September.

Following facelifted versions of the i30 and i40, as well as the all-new i20, the Korean manufacturer is giving the ix20 a light nip and tuck. The model was introduced in 2010, so it's overdue for a refresh. It's the sister car to the Kia Venga and a rival for the likes of Citroën's C3 Picasso and the Nissan Note.

These prototype models wear heavy camouflage, but we can see that styling changes over today's model are light, focusing around the front and rear bumpers. At the front, the updated ix20 is likely to echo the look of the i20, featuring that car's updated front grille and badge and reprofiled front air intakes.

The dimensions of this facelifted model should stay close to those of the current car, which has been praised for its high roofline and interior space. Hyundai is expected to significantly update the ix20's interior, fitting the same central infotainment screen as found in the updated i30.

Engine options on the ix20 are expected to carry over unchanged but with small improvements to fuel economy and emissions. That means 1.4 and 1.6-litre engines in both petrol and diesel forms, coupled to five and six-speed manual and four-speed automatic gearboxes.

Although official pricing information has yet to be revealed, expect the updated ix20 to increase from the £12,515 starting price of today's car. 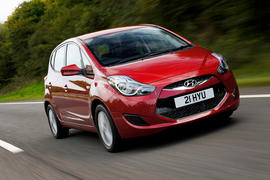 The Hyundai ix20 is perfect for drivers looking for a high quality, practical and small car with a sensible price tag

It isn't a brand new car. The doors, windows and interior door cards are the same as the current model. I had also been led to believe that the IX20 will not be directly replaced, as is the way with many small MPVs. Shame really, they serve a highly practical purpose that the mini crossovers (that seem to replace them) don't.
xxxx 27 January 2015

So is this a facelift or a full model change?

The 2015 i20 is a completely new model, so logically this would be new too, not just a facelift. Judging by the disguise, I'd say this is a totally new replacement confirming that the Koreans really mean business - if ever there was any doubt!