BACK TO ALL NEWS
Currently reading: World Solar Challenge - the most extreme road race on earth?
UP NEXT
A guiding Lichte: Meeting Audi's chief designer

World Solar Challenge - the most extreme road race on earth?

The World Solar Challenge is the ultimate no-octane motorsport. What's it like to race a solar-powered car on Australia's most demanding road
Share
Open gallery
Close
Share story

The race route notes read like features on a road map from The Hobbit – cross the Tropic of Capricorn, avoid wandering stock, pass the world’s longest fence, and Beware of Aliens.

Competitors in the biennial Bridgestone World Solar Challenge race across one of the least hospitable places on Earth.

They follow the notorious Stuart Highway, 1850 miles from Darwin to Adelaide, long revered as Australia’s most dangerous and demanding road. Driving in lightweight cars with no air-con and skinny tyres, teams mostly composed of students must overcome searing temperatures, unpredictable wildlife and the wake from 50-metre-long road trains just to make the chequered flag. 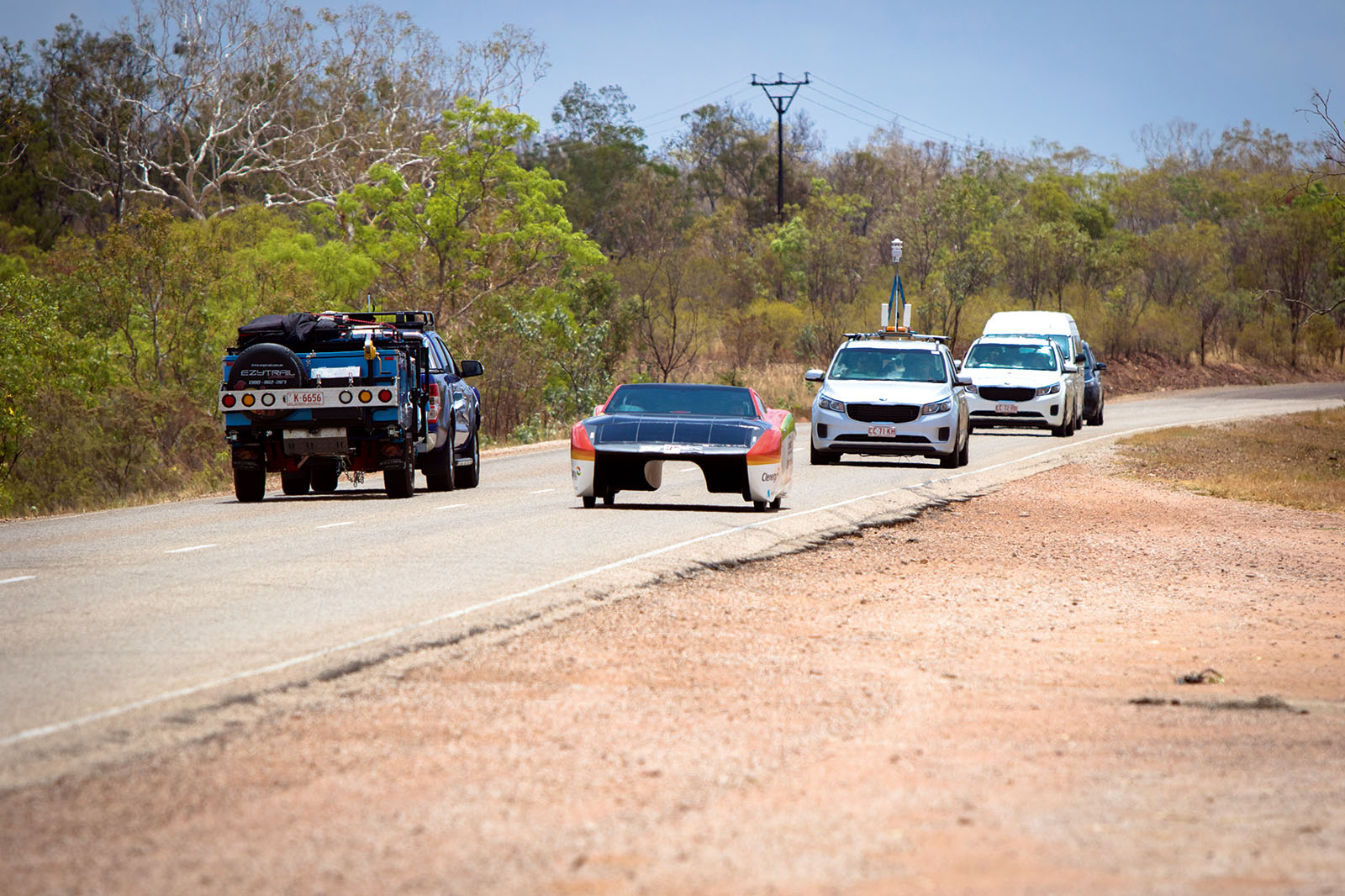 Speed limits weren’t introduced in this godless place until 2007 and drink-driving is rife. This was the course of the first and only Cannonball Run in Australia, held in 1994. Four people died in that race when a Ferrari F40 crashed at a checkpoint.

The end of car production in Australia - what went wrong?

Solar event director Chris Selwood explains the ethos: “The youngsters taking part are the bright young things of the world who are dedicated to doing something that makes a difference. The solar know-how we have gathered here is staggering. It’s way beyond what any car manufacturer has ever utilised.

“Obviously, the more funding a team can raise the better their chances but the rules are very strict. Every entry has to conform to set criteria before they even cross the start line.”

The race start in Darwin’s State Square is one of the most unusual spectacles in motorsport. There are no wheelspins, no pit-lane blondes and, of course, absolutely no roar from the exhaust pipes.

A polite round of applause from several thousand bemused onlookers sends each vehicle on its way, with a 15-piece orchestra playing Abba tunes in the background.

Sitting behind the steering wheel of a 480kg car travelling at 45mph for hour after hour, I’m starting to understand why this race is as much about endurance as it is about speed.

Temperatures in the cabin have reached 50deg C and each passing truck – some four trailers long – gives my carbonfibre machine a serious buffeting. I’ve been shoved sideways over the rumble strips on more than one occasion and narrowly missed a dead kangaroo. 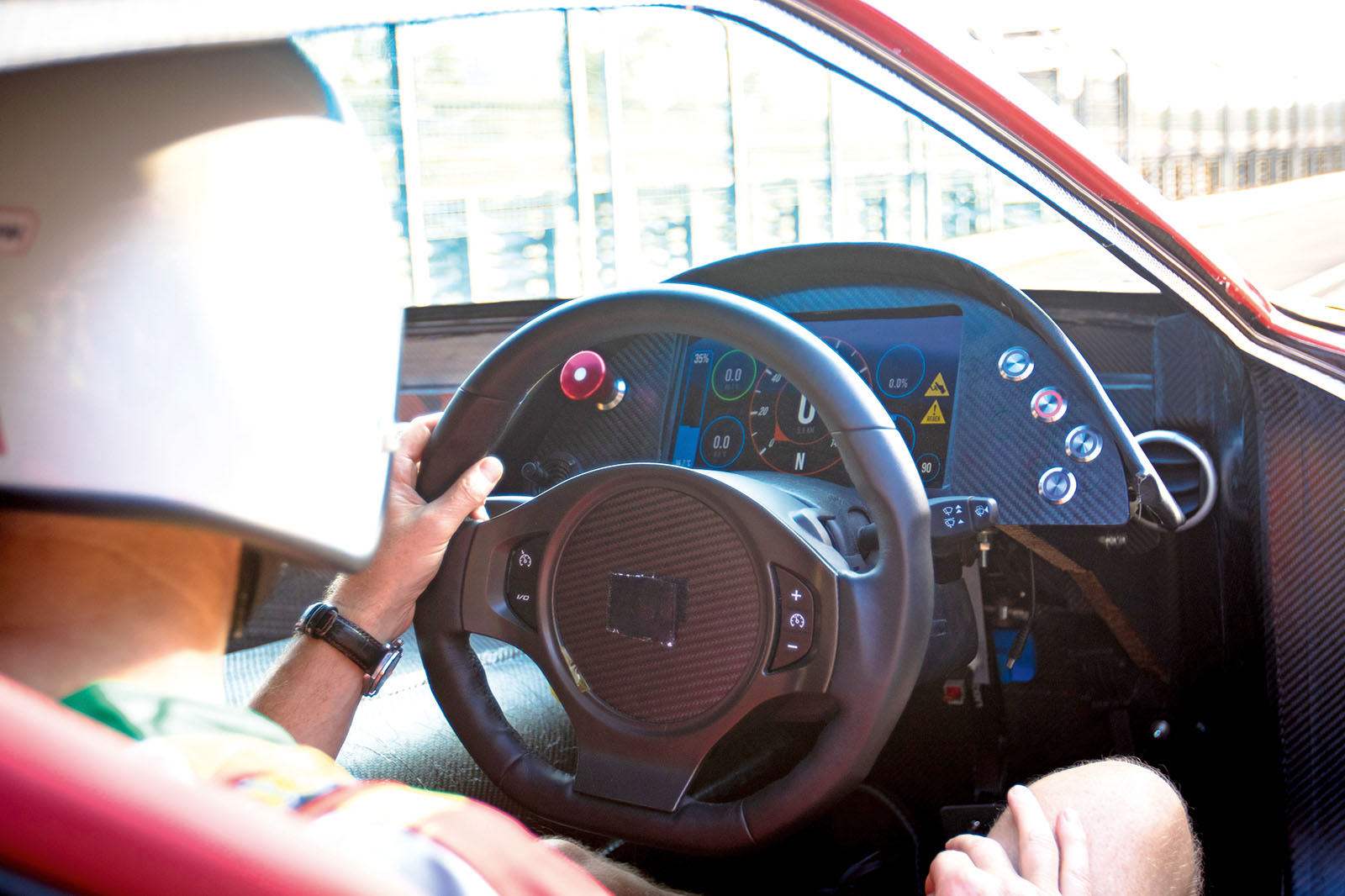 To make matters worse, my two-seat coupé has absolutely no ventilation – apart from a plastic travel fan that refuses to stay upright on the dashboard. A water bottle is strapped to the back of my seat but the fluid inside is lukewarm and almost unpalatable.

I’m one of four drivers for Queensland-based Clenergy Team Arrow. They have bravely offered me the chance to drive a leg of the route, from Darwin to Katherine – known as the town where the outback meets the tropics.

The Arrow STF (Sports Touring Framework) is entered in the Cruiser Class, vehicles designed to carry more than one person and judged as much for practical features as out and out speed.

The faster, Challenger Class has single-seaters that race flat-out to be first across the line. There are 40 teams in the Solar Challenge, mostly from leading universities around the world. Each has poured years of work into their cars, most of which have cost hundreds of thousands of pounds to build.

Arrow is one of the most significant entries in the race. The Australian company hopes its vehicle will become the first commercially available solar car when it is launched next year, priced at around £148,000.

Before the race, owner Cameron Tuesley explains: “The STF is essentially a race-prepared prototype for what we want to eventually offer customers. The road-going version will feature air conditioning, more comfortable seats and a proper infotainment system.”

Judging by the stifling heat in the cabin, I’d say air-con has to be top of the list. Even the windows of the car are designed to stay shut, helping to make the STF three times more aerodynamic than a Tesla Model S. 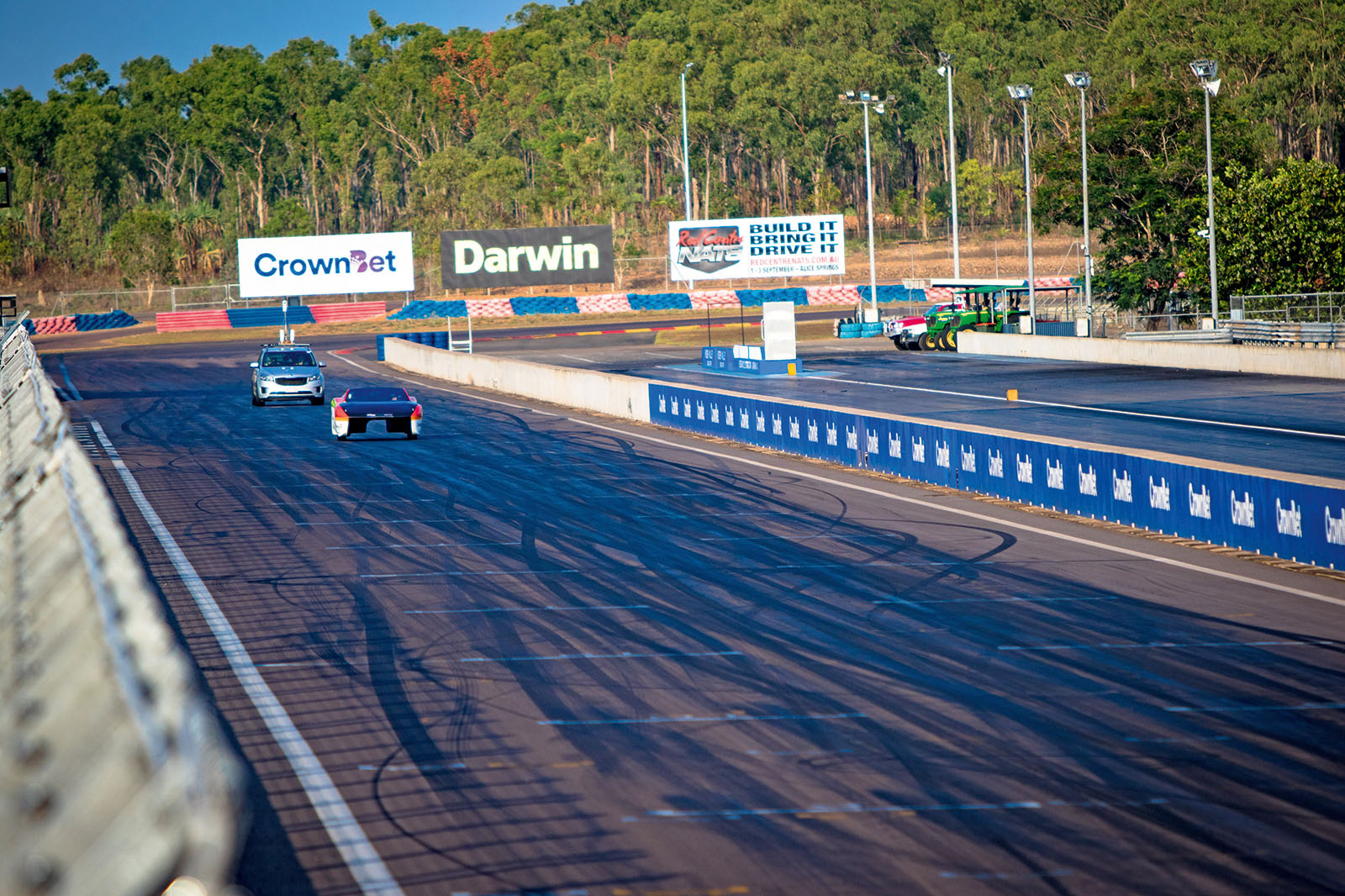 Driving a solar car in a long-distance race is all about conserving as much energy as possible. Teams can top up their lithium ion batteries by 10% but the rest must come from the sun en route. So when the clouds appear above me, every kilowatt of battery power becomes crucial.

Teams are allowed an external charge as a last resort but it counts against their finishing score. It means I spend my time balancing solar energy production from the panels on the roof with the optimum speed.

A digital dashboard shows when I’m using too much right foot, or when the Arrow STF is cruising at maximum efficiency. As sweat soaks my T-shirt, I soon realise that using the brakes is frowned upon but coasting down inclines or using momentum to cruise over the brow of a hill is fine.

The team’s chase car tells me to keep at 45mph – remarkably difficult even on a flat road.

The super-slim tyres aren’t just designed to save weight. Each one has been moulded especially for the car’s aerodynamic profile and costs £800. They reduce rolling resistance to a minimum but also make the Arrow STF feel skittish in the slightest crosswind.

The bodyshell itself is made from carbonfibre, with an array of solar panels that cover every inch of the roof and bonnet. The delicate panels are covered in Gorilla Glass, the same protection used on the screen of a mobile phone. 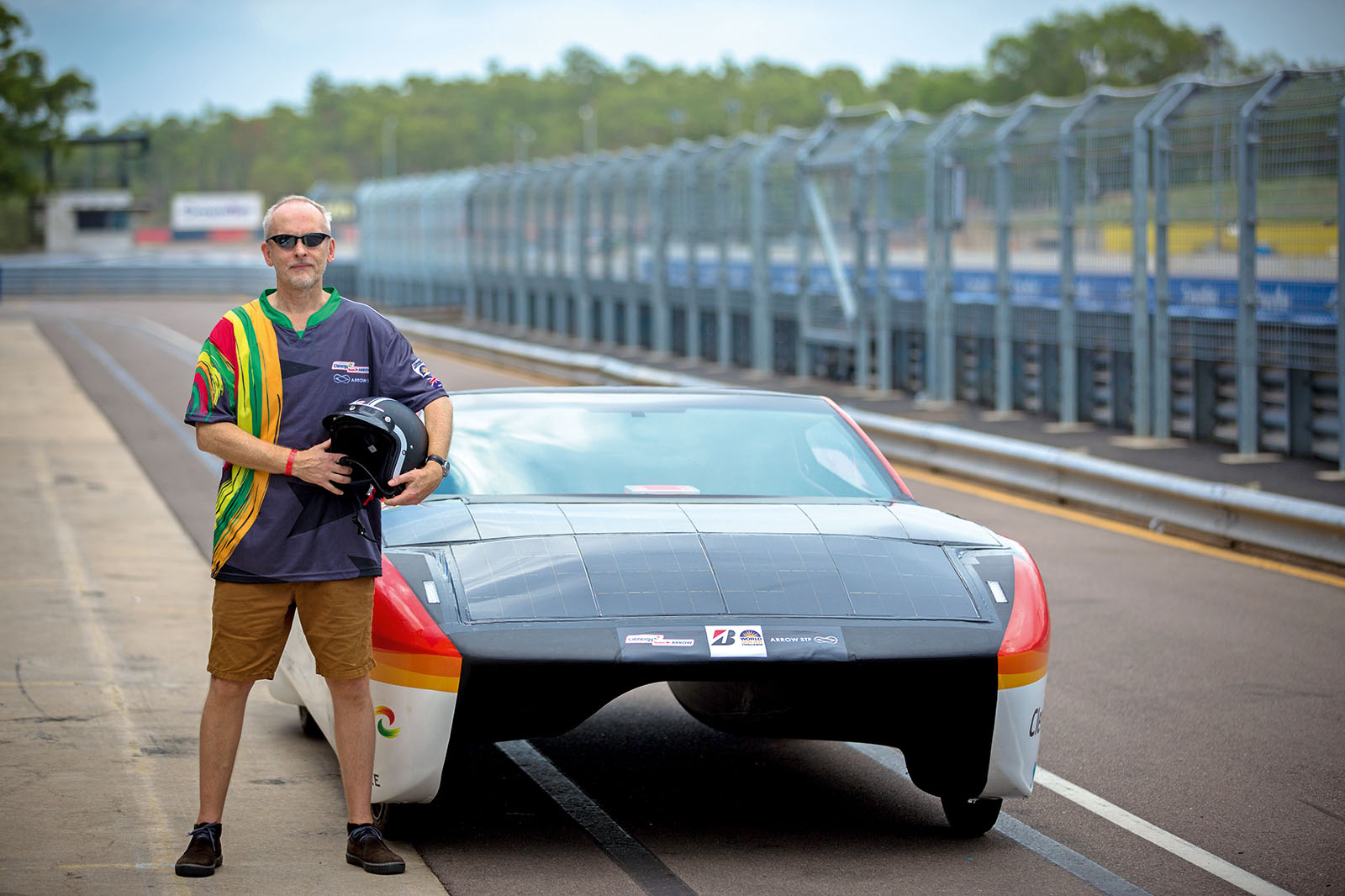 Apart from giant mosquitoes and the five deadliest snakes in Australia, wandering kangaroos create a very real road danger here. They are most active at sunset – the main reason why all teams have to stop at 5pm every day, camping at the roadside until daybreak, when the race begins again.

So by the time I pull in at Katherine, I’m more than happy to relinquish my driving duties. My helmet is dripping and I have to be helped from the seat. It’s so hot that my watch strap has disintegrated in the heat.

The World Solar Challenge may lack the high-octane whiff of Formula 1 but it’s just as much of a spectacle. The organisers would love to hold a long-distance event in Europe too, but there’s just one problem: not enough sun. 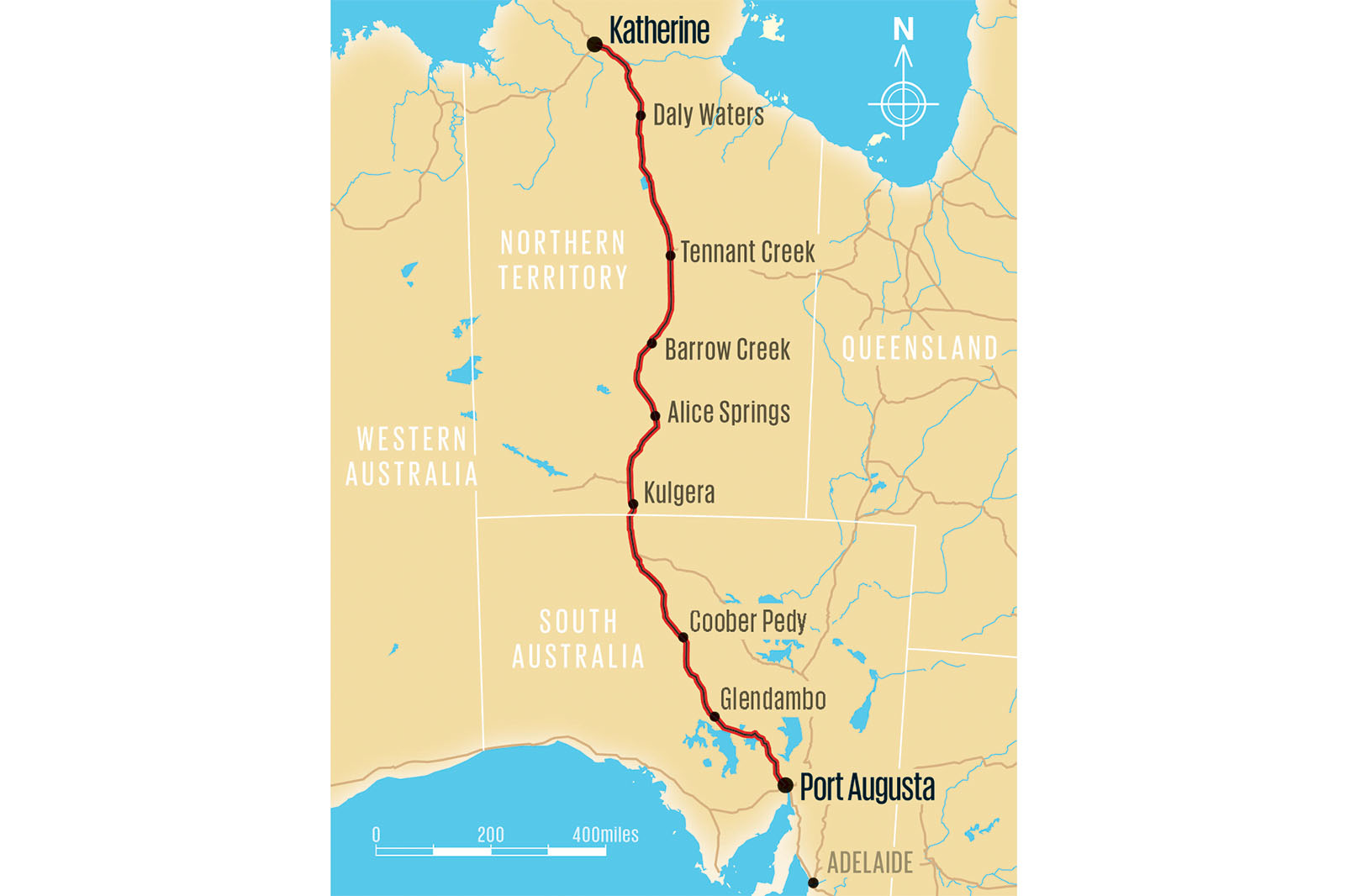 The World Solar Challenge travels 1850 miles from Darwin to Adelaide down the Stuart Highway. There are nine checkpoints – and only one right turn…

Dutch team Nuon won this year’s World Solar Challenge for the third time in a row. Nuna 9 made it to Adelaide in 37 hours and 10 minutes – despite appalling weather on the last few days. The lightweight Challenger Class machine tipped the scales at just 135kg. It featured a relatively small solar panel of just 2.6sq m, with a highly efficient in-wheel motor and a 20kg lithium ion battery with a capacity of 5.1kWh. Nuna 9 is the smallest car the team has built, measuring 4.5m long, 1.75m wide and a mere 1.12m high. With a rolling resistance 10 times less than an average car, the drag efficiency is the same as a door mirror…

A British team at the cutting edge of solar technology crashed its vehicle in Australia just days before the start of the race.

Twenty members of the 60-strong team had spent a month in the outback fine-tuning Mirage. The all-female line-up of drivers were on a private test track near Alice Spring when the car went out of control and crashed into a barrier.

“Everybody was completely shocked,” said team spokesman Dan Browne. “We ran to get the driver out but the car was a mess. The emergency services were there very quickly but she broke her foot in the accident.”

Mirage was narrower than most entries in the race – although the team says it doesn’t know what caused the stability problem.

It’s the second time the team has travelled to Australia and not made the start line. In 2013, Resolution rolled and skidded during trials.

The only British entry in this year’s event was Durham University Electric Motorsport, who took part in the Adventure Class and made the finish.

CLASS ACTS - There are three classes in the world solar challenge. Here's our guide to them 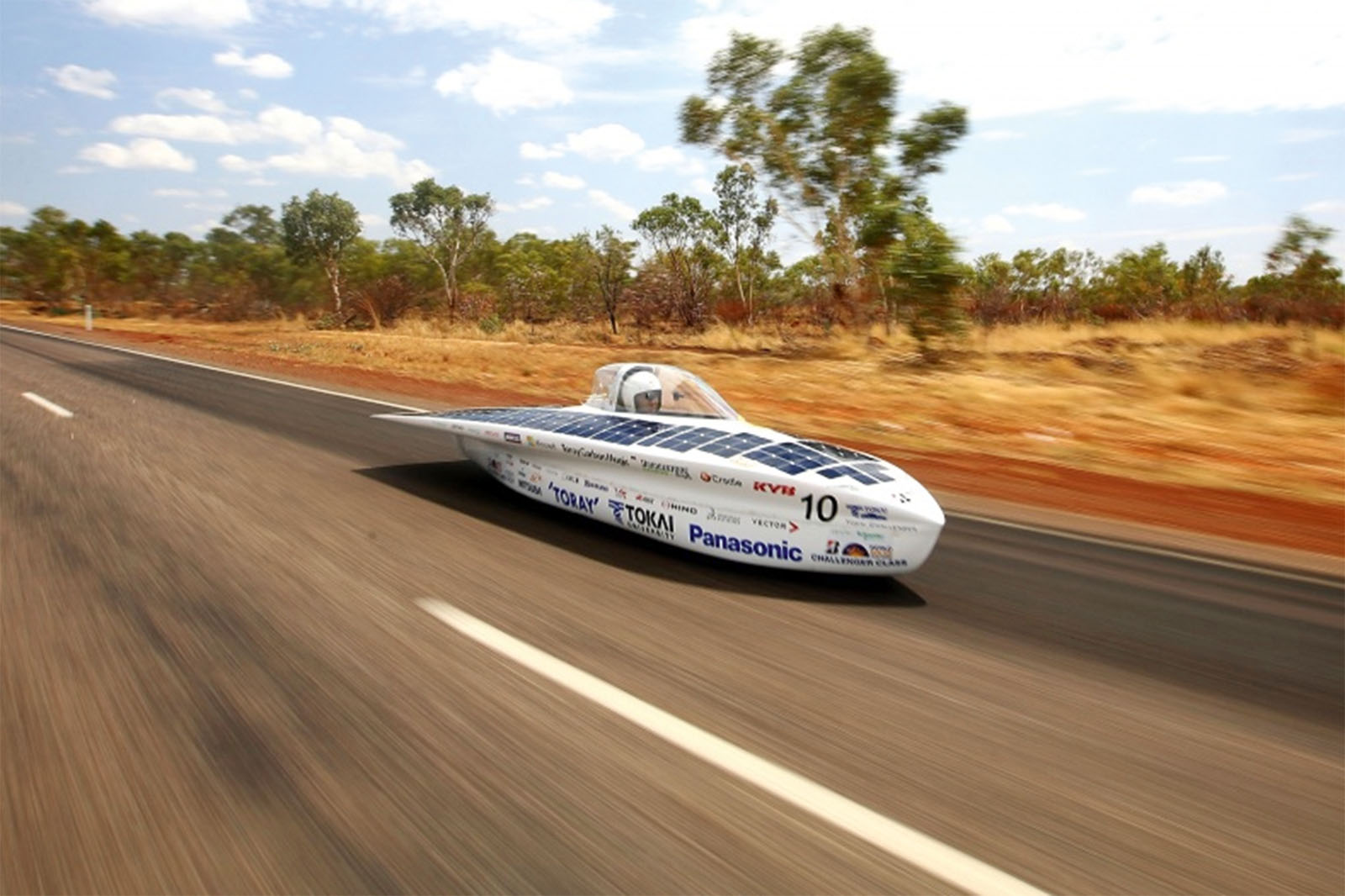 It’s all about big-budget teams racing single-seat cars. Each one is designed entirely for speed, with radical, futuristic designs that minimise both drag and weight. The maximum length is 5.0m and the solar panel can be no larger than 4.2sq m. Super-light, they are most prone to the crosswinds that plague the route north of Adelaide. 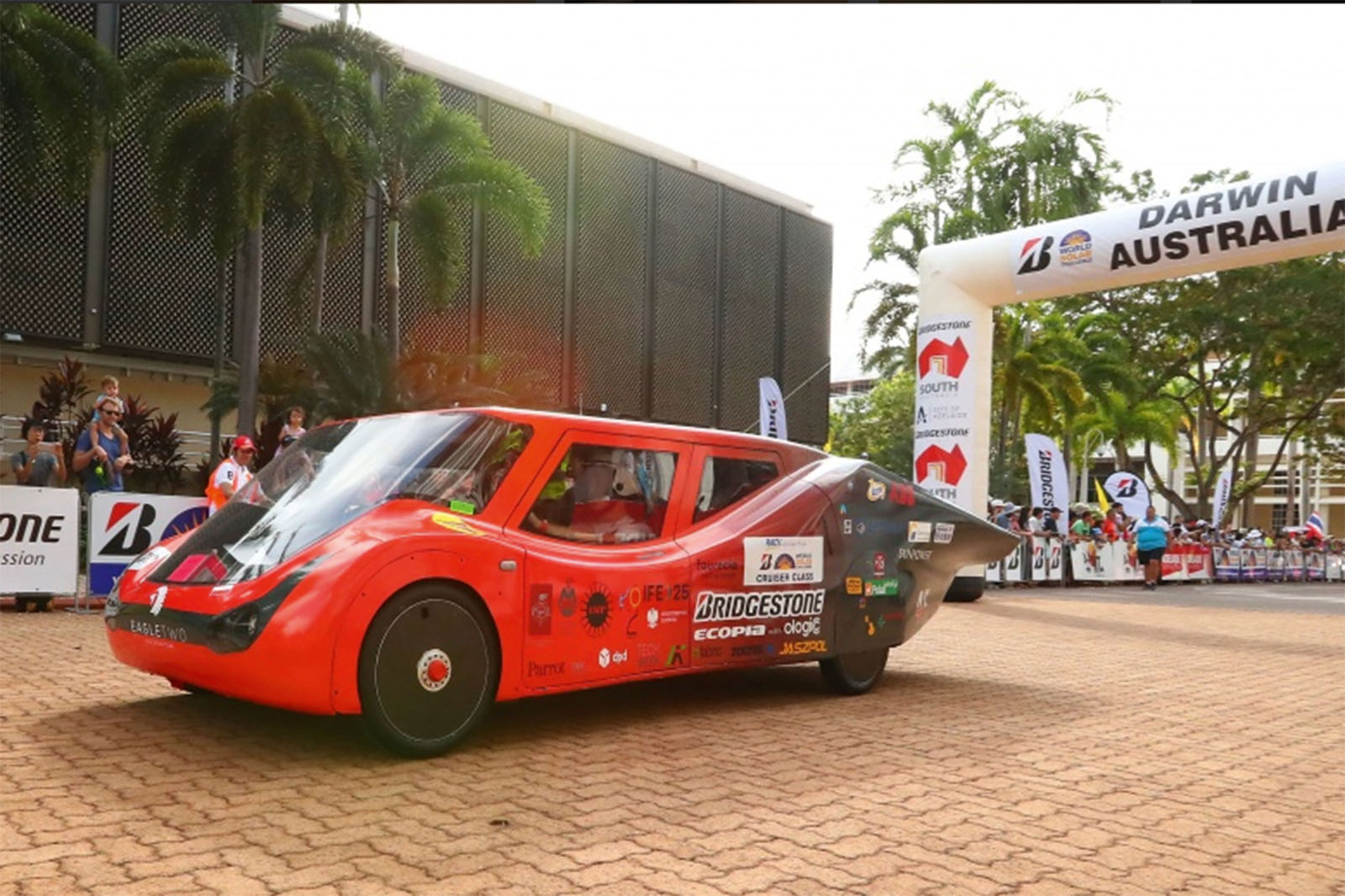 A new class introduced in 2013 to encourage solar machines designed more for practicality and commercial use. The car that crosses the line first in Adelaide may not necessarily win, as bonus points are awarded for vehicles with real-world potential. Up to four passengers are allowed in each car. Ballast is added to bring the minimum weight of each person up to 80kg. 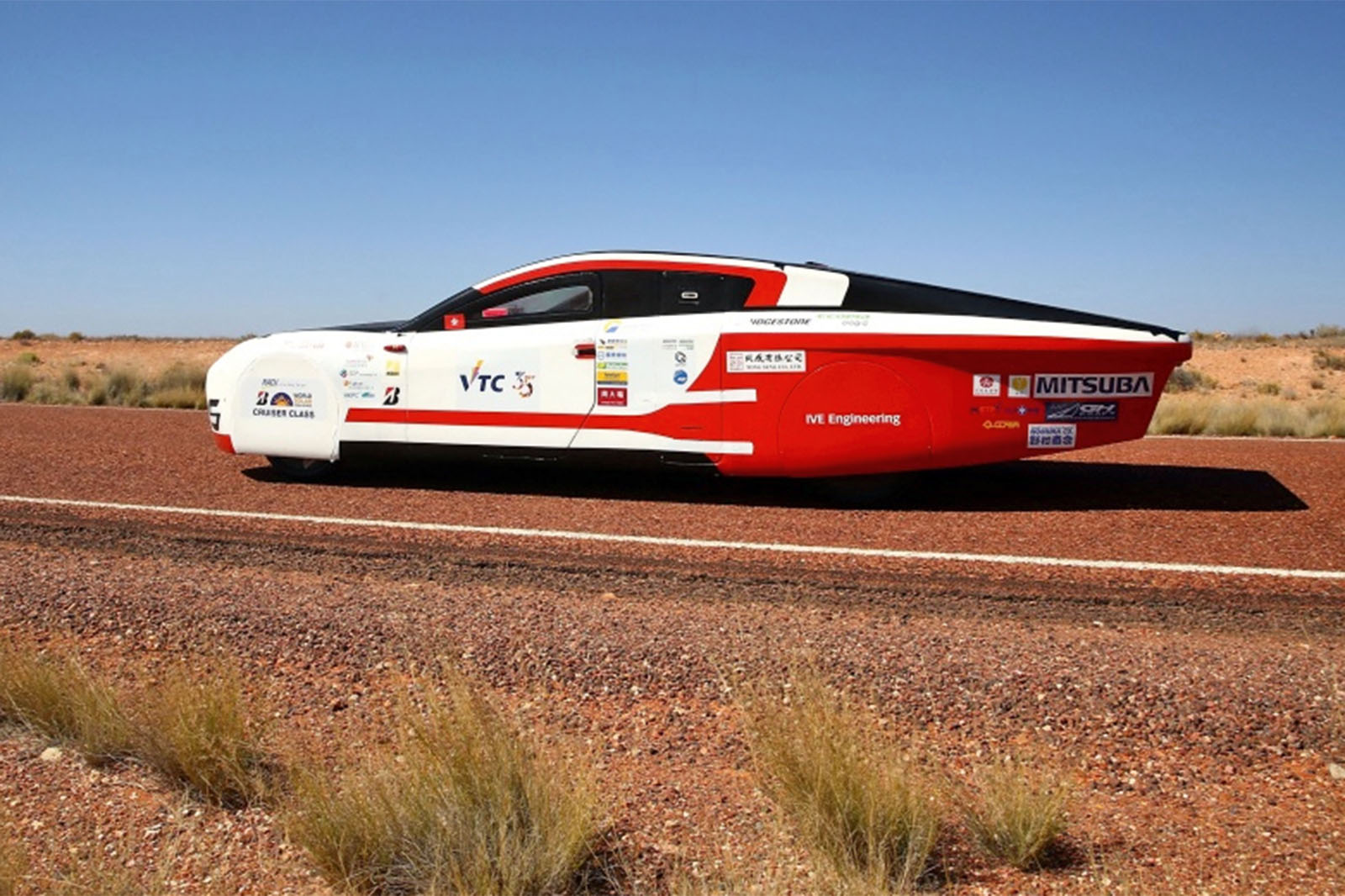 This class allows cars built for previous editions of the Challenge to run again but with new team members. The class can also be a catchment for entries that don’t make the strict road-worthiness requirements applied to Cruiser and Challenger. It’s supposedly ‘noncompetitive’ but that doesn’t stop teams pushing their cars to the limit.

The end of car production in Australia - what went wrong?