BACK TO ALL NEWS
Currently reading: Interview: Petter Solberg on his rally return and electric motorsport
UP NEXT
Mystery Ferrari LaFerrari prototype spotted with new bodywork

Interview: Petter Solberg on his rally return and electric motorsport

Petter Solberg, the 2003 World Rally champion, hasn’t competed at the highest level of the sport since making a successful switch to rallycross in 2013 – a category in which he became a double world champion in 2014 and 2015.

The Norwegian last competed in a World Rally Championship event on Rally Spain in 2012, but after a six-year break was tempted back into action in Catalunya this weekend.

Solberg wasn’t competing in the top division for World Rally Cars but in the second-tier WRC2 division. This meant swapping his 600bhp-plus Volkswagen Polo Supercar for a less powerful 1.6-litre Volkswagen Polo GTI R5, which is built to the cost-controlled R5 class rules and is far closer to a road car.

Solberg was competing for the Volkswagen Motorsport squad, which was itself making a return to the sport it dominated between 2013 and 2016. The firm won four straight WRC titles with Sébastien Ogier, but this comeback was a one-off to showcase the Polo GTI R5 on its debut, ahead of deliveries to customers beginning.

Solberg made an impressive return in the new 1.6-litre Polo GTI R5, battling for the class lead early in the event before falling back a bit in difficult damp conditions on Saturday and Sunday’s Tarmac stages.

Autocar caught up with Solberg, now 43, to discuss his rallying return and his views on the future of rallycross.

How does it feel to be back in rallying?

“It’s good. On the first day, I had big enjoyment on the gravel stages. I had a test day before the event, but on the longest stage of the day we were strong. I had some issues on the smaller stages, but in terms of performance I’m very pleased - and surprised. I was just happy to be here and to be part of this.”

How did the opportunity with Volkswagen come about?

“Sven [Smeets, Volkswagen Motorsport boss] knew I wanted to do one more rally. We’ve discussed it for a long time, but it had to be the right opportunity at the right time. We were looking at Sweden, but I had an illness [the lung disease sarcoidosis] recently, and that changed things a lot. When you go through something like that, it changes your approach a little bit.”

How hard is it to switch from a 600bhp rallycross car to an R5 rally car with just under 300bhp?

“The start line is the biggest difference! When you start an event in a rallycross car, your head is thrown back - 0-100kmh in 1.9 seconds. But for enjoyable driving, with the chassis and so on and how it handles, the rally car is really good fun. For sure, it’s more difficult to drive with less horsepower, especially when you’re used to it all the time.”

Did it take time to adjust?

“I switched the mentality very quickly, but most difficult was that I know where I lost a few seconds - it was on the very high speed bits that require commitment. I was not interested to go right to the limit in terms of risk. It’s quite a big difference having to trust in pacenotes again: if I have in the pacenotes ‘flat six right’, I hear it but I don’t do it. I’m 43 now, so the safeness is here [points to his head]. If you’d asked me before when I was younger, I didn’t have that safeness – it was flat out. It's life, and now you come and have fun with it and enjoy it.” 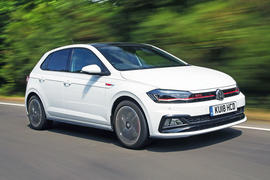 Volkswagen successfully miniaturises the performance Golf’s recipe for the first time - but does the hot supermini have a chassis to match its newly acquired engine?

Is this a one-off, or could you do more rallies next year?

“I will definitely not compete in rallying next year. I’ve been doing motorsport since 1982, and I love it. But I want to look a little into the future, for younger drivers. You can see that in my rallycross team with Johan Kristoffersson [who won the world rallycross title in 2017 and 2018]. He’s really learned, and he’s taking tips and he’s not cocky. Drivers like him want to learn, and to take the best from everybody, like I did with Carlos [Sainz], Colin [McRae] and Tommi [Makinen]. That was what made me so good: I was asking them a lot of questions when I was their team-mate. It takes a lot of time to learn in rallying, and I want to help them. So I will not drive in rallying. The plan is to continue in rallycross and we have everything ready to do it. But the last few weeks have been a bit difficult [for the sport], and we will need to see the situation with that championship. There are a lot of things going on.”

The World Rallycross Championship has been looking at a switch to electric cars, but those plans have been delayed. What are your thoughts?

“We need to think for the future, and of course electric is very important for the future. Rallycross is the one motorsport that can tackle electric very easily – you can have cars with 700bhp and still have big action. I can understand some people are concerned about the noise - I understand that, it’s the same for me - but I think we need to look at this in a completely different way.”

Could rallycross miss the boat if it doesn’t embrace electric soon?

“That’s a good question. Electric is coming [to motorsport], definitely. One reason is that the manufacturers need to have a story behind something to support it, which electric has. For young drivers, it will be the biggest opportunity for them to get into the sport: the manufacturer teams will have four cars, and then there will be more chances to get the young guys in. I started my rally career as a third driver, with no pressure: I crashed a lot, but I came back again because I had time to build the package and the experience.”

Do you get as much enjoyment from helping young drivers now as winning yourself?

“Having a young team-mate in Johan and helping him to be world champion, that gives me a lot of satisfaction. It’s strange, but it’s really good fun. Even if they beat you, it doesn’t matter. If you help someone with the strategy, or the chassis or the details about traction and perfectionism, it’s part of it - and then you are part of it.”

Volkswagen quits WRC at end of 2016

.....that Petter is also less than excited by the prospect of electric Rally X....damned with faint praise I think it is called!

Great to see him in a Rally car again, I was sad when he was dropped from his team as I always rated his ability...born out by this latest podium result, after a long break.

And, just to be clear, having talked to him, I'm sure Petter wasn't damning electric rallycross with faint praise. You could see his enthusiasm for me - perhaps it just doesn't come across in the actual words!

I thought Petter was pretty clear if you have reported his comments word for word....

"I can understand some people are concerned about the noise (lack of),  I understand that, its the same for me".

I can think of no way better way to neuter the spectacle of any Motor sport than to take away the sound (or worse provide synthetic sound), its like watching dancers at a silent disco...pointless and boring...no matter how quick they may be.

Formula E is a fine example....I literally dont know a single friend or aquaitance who watches it ...for christs sake people are having enough of a problem with the lack of noise in F1!

It was very well authored and

It was very well authored and easy to learn. Unlike additional blogs I have read which are really not that good. I also found your $1 domains posts very amusing.