The Bloodhound Land Speed Record rocket car has passed the 500mph mark as it continues to gather pace in the Kalahari desert in South Africa.

Pilot Andy Green logged a speed this week of 501mph on the 12.4-mile Hakskeen Pan track near the Namibian border. But the run was not without drama.

During the engine shutdown procedure, a fire warning alert sounded in the cockpit. Green called “Fire, fire, fire over the radio and quickly evacuated the cockpit. Rescue trucks attended the scene, but it turned out to be a false alarm.

The alert was triggered by a fire wire that's designed to burn and break at 160 deg C. The afternoon temperature of 36 deg C, combined with heat soak from the Eurofighter Typhoon jet engine, was put down as the cause. But the team took positives from the incident, claiming it “validated that both the fire detection system and fire response processes the team has set up work successfully”.

The Bloodhound team has also reported minor bodywork damage to the rear deltas, which are aerodynamic panels that cover the rear suspension. Sand and grit kicked up by the car’s airflow hammered a small area of the bodywork, crumpling the titanium skin like tissue paper. The first repair failed to survive a previous run at 491mph, but the new patches held up unscathed in the latest, faster attempt.

The 501mph speed means Bloodhound LSR has entered the record books within the list of the top 10 fastest cars in history. The team is now preparing for the next challenge, to hit 550 mph, within the next few days as the work towards their target of breaking the ultimate record of 763.035mph.

The long-promised testing runs are taking place on a specially prepared 20km (12.4-mile) track at Hakskeen Pan in the Kalahari Desert, near the Namibian border.

To test the installation of its Rolls-Royce EJ200 gas turbine engine (as used by the Eurofighter Typhoon), the car was late last month successfully given a “dry crank” at its Gloucestershire HQ, which involved having the exhaust output of a smaller jet engine blown into its intake to rotate the moving parts of the main motor.

“It involves turning the engine without activating the ignition,” says engineering director Mark Chapman. “It’s like a last look under the hood.”

In South Africa, the Bloodhound team plans a series of 13 runs to test high-speed aerodynamics and stability, especially during the 400mph-plus transition phase when steering authority delivered by the front wheels’ grip on the track surface changes and the front wheels become rudder-like aero devices. 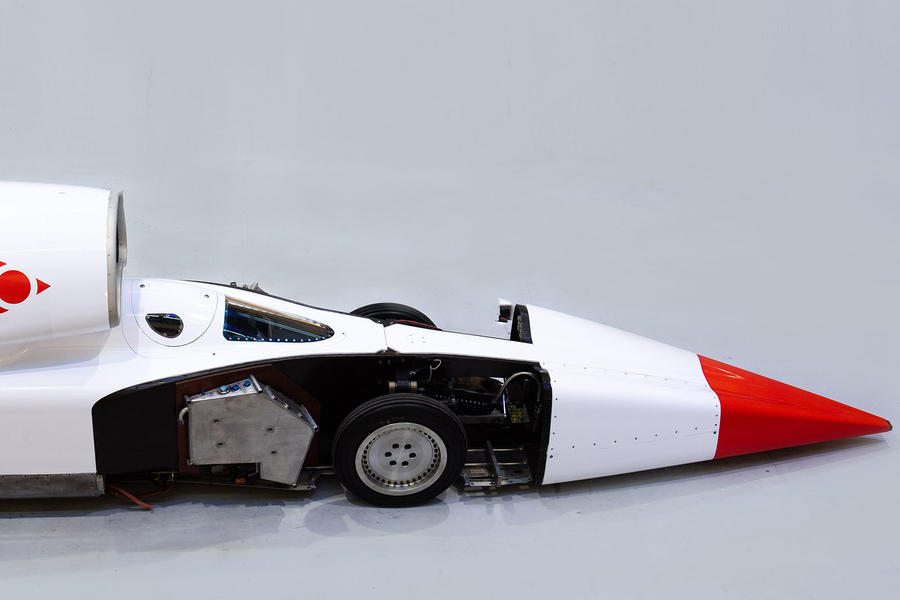 Engineering director Mark Chapman says high speed is not the biggest issue this time, however.

“The 200mph testing we did at Newquay Airport in October 2017 was all about accelerating the car, about checking that we could generate thrust from standstill," he says. "The car was only at full power for about two seconds.”

“In South Africa this time our EJ200 engine will develop its full 54,000 horsepower for nearly a minute, but the main emphasis will be on stopping. The biggest engineering challenge of all is stopping a car as fast as this without running out of desert.

“We’ll be testing a two-parachute braking system, and of course we have friction brakes that work best below about 200mph. On top of that, we’ll do handling tests and investigate stability changes. And we have to see how well the team can perform under pressure in heat that might hit 40deg C."

Engineering millionaire Ian Warhurst, whose “seven-figure” investment rescued the project from receivership early this year at the last minute, says the project will seek financial and technical backers in earnest once the first South African testing is successful.

“I’m very optimistic about the future,” he says. “We have a great deal of interest from potential backers, once the car has run. It was always clear, given the history of this project, that first of all we needed to show we can make things happen.”

Bloodhound will be driven by former RAF jet pilot and current record holder Wing Commander Andy Green, who, back in 1997, became the only person ever to drive a car at supersonic speed on land when he took his Thrust SSC to a new mark of 763.035mph. The team members believe they can achieve 800mph as a first step. 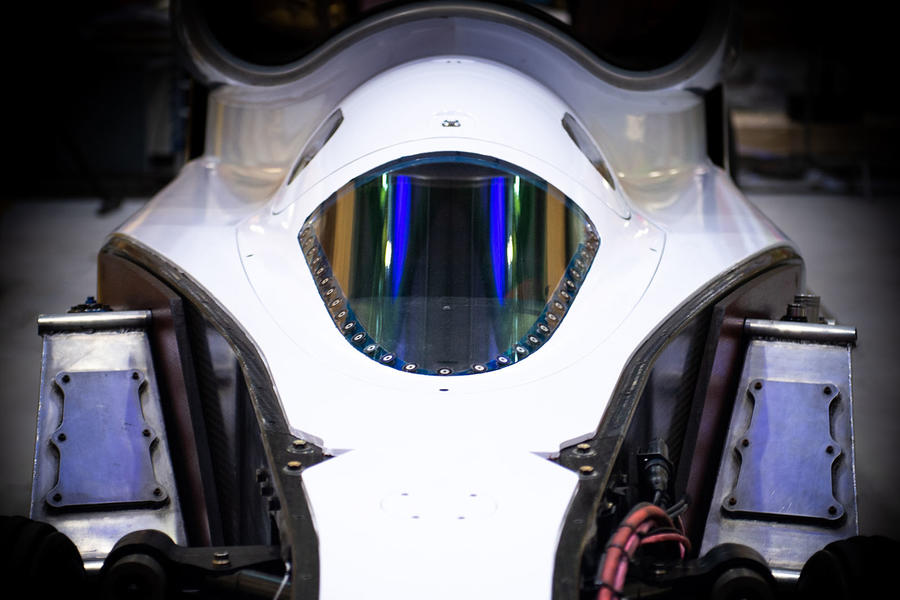 The record attempt is scheduled to take place late in 2020, but the team has set no timetable for their other, much tougher objective of achieving 1000mph on land.

“We’ve divided our aims into two separate phases,” says Warhurst, owner and CEO of the project’s supporting company, Grafton LSR. “We’ll concentrate on the record first, and when we’ve achieved that, we’ll use the data and knowledge gained to make a judgement about whether to go for the second phase.”

The test track at Hakskeen Pan been specially prepared on a dry lake bed by 317 members of the local Mier community. Working by hand, they have removed more than 16,500 tonnes of stone in preparation for Bloodhound’s runs.

Thirteen parallel tracks have been laid out, because the car’s unique aluminium wheels – which don’t have tyres because the rotational speed would throw them off the rims – penetrate the track’s hard surface as they run, and “up to 13” runs are planned for this first trip to South Africa.

The new Bloodhound ownership team is maintaining its role as an attraction to STEM (science, technology, engineering and maths) subjects for school-age students, by making its results and research findings publicly available. “This is the first land speed record attempt of the digital era,” says Warhurst. “Digital platforms can share data in real time from hundreds of sensors on the car, allowing budding engineers to see exactly how the car is behaving as it dices with physics.”

Warhurst is funding the current preparations himself but is depending on the upcoming tests to attract new backers, especially title and livery sponsors. For now, the car is painted all white, but Warhurst believes when it “does something”, interested corporate and technical partners, currently waiting in the wings, will come forward.

The project moved from its old base near Bristol and is now based in new premises in the SGS Berkeley Green University Technical College, in Berkeley, Gloucestershire.

The car’s new livery – a red fin with a white body – is intended to encourage new investors in the project, which for the first time will offer both title and livery sponsorships. Bloodhound’s original yellow and blue livery, from what they’re now calling the R&D phase, will still be used in photographs and videos, the new owners say.

Warhurst established a new company, Grafton LSR Ltd, to run the project. The name is taken from an 1839 painting by Sir Edwin Henry Landseer, which now hangs in the Tate Gallery, of a bloodhound called Grafton.

Warhurst is joined in the new company by familiar faces such as Green and Chapman, along with many others from the original team “to provide continuity”. The team also now includes commercial director and ex-Formula 1 money man Ewen Honeyman, whose job is to find new backers for the project.

For the time being, Warhurst, who was eight days into his retirement when he heard last December of Bloodhound’s demise by text from his son, will provide “the cashflow to keep the project on track” until extra backers are found. Warhurst recently sold Melett, a turbocharger parts and equipment supplier of which he was the owner and managing director.

“I have been overwhelmed by the passion and enthusiasm the public has shown for the project,” said Warhurst. “Over the past decade, an incredible amount of hard graft has been invested in this project. It would be a tragedy to see it go to waste. It’s my ambition to let Bloodhound off the leash and see just how fast it can go.”

The former boss of Bloodhound SSC, Richard Noble, will not participate on Bloodhound’s engineering side but will continue to work on its educational aspects.

“It was a hard fight to create the Bloodhound car, the largest STEM programme in the UK, the public engagement programme and the 1000-man-year desert preparation. Our weakness was always finance but now, with Ian Warhurst, the team has the support it needs to drive forward.”

Why did you buy Bloodhound?

“I had to. They were on the point of cutting it up and sending it away for scrap. In fact, they put it off so I could come and see the car. I knew I couldn’t leave without doing some kind of deal.”

Did you know immediately that you’d go for the record?

“We had to decide whether to put it in a museum or run it as intended. It took about two months to decide it could be a commercial proposition.”

“So far, we’ve had some good indicators, calls from big corporates talking the right numbers, broadly speaking. The problem for projects like this is cashflow, which is what I’m providing. When you get close to running, you have something to sell to sponsors. We believe this can run on a proper commercial basis.”

Have you been to Hakskeen Pan yet?

“Yes, I was there earlier this month, doing 100mph on it in a Toyota Land Cruiser. If you want to see flat, boy, that’s it. I couldn’t believe we’d need to go eight times as fast to break the [current 763mph] record.”

Bloodhound SSC: inside the factory building a 1000mph car

Yeah, why did we ever leave those nice comfy caves?!

I bet the carbon output from the Bloodhound project is miniscule compared to the worldwide electricity generation needed to charge all the naysayers' smartphones...

So what has the internal combustion contributed to the world

Except pollution and a dying planet. The project is as futile as it is asinine. It has no place in todays society. If people want to see the human race progress, lets find a way to stop ourselves from cooking on this planet we call home. Now that's real progress, which will benefit everybody, and not just a select few.

Except pollution and a dying planet. The project is as futile as it is asinine. It has no place in todays society. If people want to see the human race progress, lets find a way to stop ourselves from cooking on this planet we call home. Now that's real progress, which will benefit everybody, and not just a select few.

yes, there are more worthy of our attention, but, you have to have some ambition, believe and marvel at man overcoming , breaking down barriers good or bad, we've gone from the days of a man waving a red flag in front of a car, to wheeled vehicle doing over a thousand miles an hour!