BACK TO ALL NEWS
Currently reading: Analysis: Why 1999 was Mercedes' last year at Le Mans
UP NEXT
New 2022 BMW 3 Series brings redesign and tech upgrades

Analysis: Why 1999 was Mercedes' last year at Le Mans

When Mark Webber's CLR flipped at nearly 200mph, it looked like Stuttgart would pull out of the race. Then it happened again, and again...
Open gallery
Close

“Hi, my name is Peter Dumbreck: I can fly.” As a way of introducing yourself, it certainly caught the attention.

Such flippancy in the wake of a big accident is hardly rare in young racing drivers, who tend to resort to black humour in the face of mortal peril – much like soldiers.

But 20 years on from the crash at Le Mans that arguably defined his career, the Scottish racer’s revelation about its effects on his mental state in the months that followed offer a deeper insight into the quip that, for a while, became his signature catchphrase.

It’s hard to believe that two decades have passed since Dumbreck’s Mercedes-Benz CLR took off and flew into the trees on Saturday evening – and live on TV – at the 1999 Le Mans 24 Hours. To those of us watching at the circuit, we simply thought the worst, as the realisation dawned of the horror story playing out for a Mercedes team in crisis. 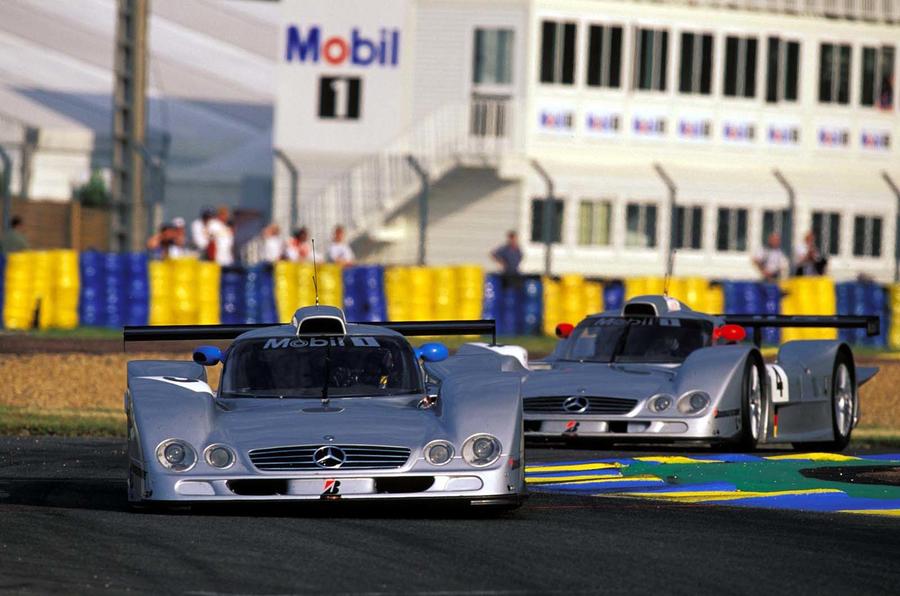 The Three-Pointed Star had history at Le Mans. Terrible history. Back in 1955 Pierre Levegh’s 300SLR launched over another car and somersaulted into the crowd on the main straight, killing the driver and more than 80 spectators. It remains the worst tragedy in motorsport history.

Now here we were, back at Le Mans 43 years later, and Mercedes endurance racers were taking off again. But this time, not through sheer bad luck– rather through a fundamental aerodynamic flaw that was causing them to take off unaided.

To make it worse, Dumbreck’s crash wasn’t the first time it had happened. It wasn’t even the second. It was the third such accident in a weekend that has since gone down as one of the most shameful in Mercedes’ long history.

A Le Mans never to be forgotten

Le Mans 1999 was set up as a classic year for the great race, as factory teams from Toyota, BMW, Audi, Nissan and Panoz joined Mercedes in serious campaigns for victory. It was the most competitive entry in years – and Merc fully expected its svelte new CLR to be a contender. 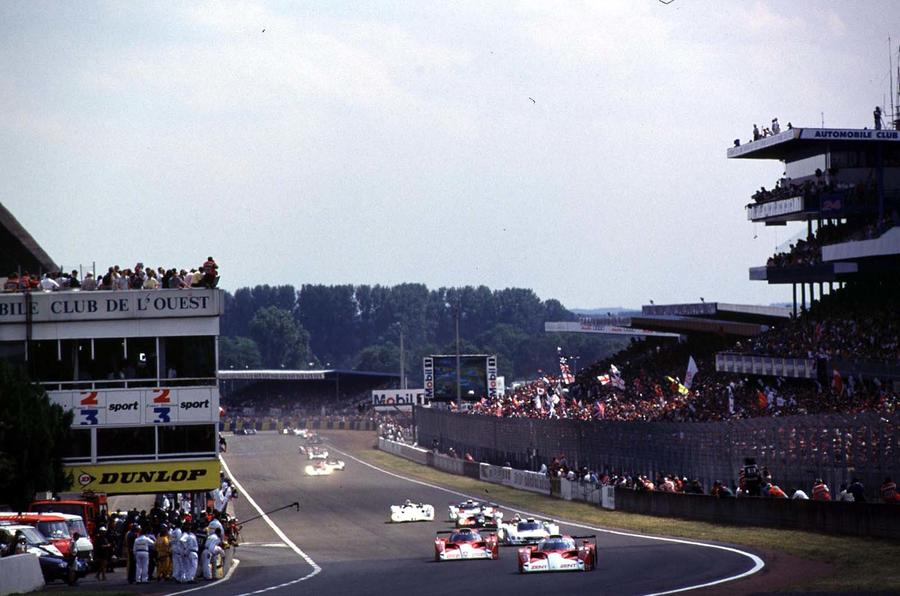 The first indication that something was seriously amiss came on Thursday night, during practice, when word reached the paddock that Mark Webber had suffered a big crash on the flat-out run to Indianapolis corner. The rumour was his car had flipped.

In his autobiography, the Australian gives a vivid account of his horrifying experience at Le Mans that year. Reading it makes you shiver.

“It happened so fast that it was like an aeroplane taking off,” he recalls. “In fact that’s exactly what was happening: at this point I was probably doing close to 300kph [186mph]… I jumped on the brakes, but it was too late… I could see the sky and then the ground and then the sky again… I thought ‘That’s probably the thing that will see me off, I’ll cop it if I go into the trees.’”

Webber had been running close behind Frank Biela’s Audi when it happened. But without eye witnesses or photographic evidence, details were sketchy. To us, the press, Mercedes played down the rumours, with a shaken but amazingly uninjured Webber ‘unavailable’ to talk.

In his book, Webber offers shocking insight into the reaction playing out within the Mercedes team. “It was then that I realised that the team did not accept my version of what had happened,” he says. “Their response? ‘No, that couldn’t happen, the car couldn’t possibly flip end over end’.”

And then it happened again…

At 23 and still only just starting his professional career, Webber’s response was simply to get back in the car – as racing drivers do. In the Saturday morning warm-up, he headed back out, this time with TV cameras trained on him. Heading down the Mulsanne, as he crested a brow behind a Chrysler Viper, the unthinkable happened. He flipped again. 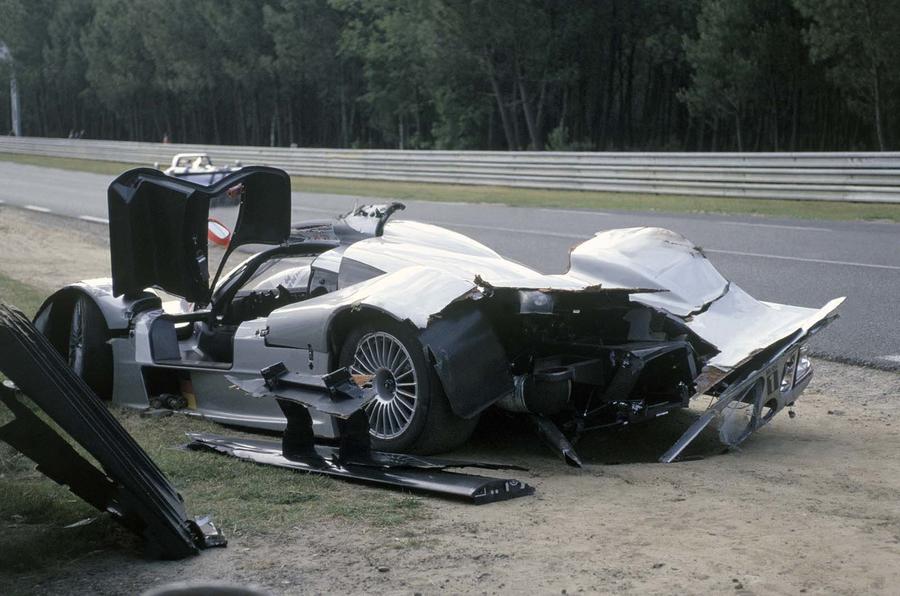 “I just couldn’t believe what was happening,” he writes. “It simply had not crossed my mind that it could happen again… Two thoughts went through my head. The first was for the team: what the f*** were those guys doing, giving me a car like this? And then: ‘There’s no way I can be that jammy again; I don’t want any pain, I want it to be over quick’.”

To those of us watching, we’ll never forget Webber’s ashen face when he emerged from the car that had landed this time on its roof. Two flying accidents and on neither occasion had he left the track and flown into the trees that line most of it – or into a crowd enclosure, for that matter. What an escape.

Most expected Mercedes to withdraw in the circumstances. But come the afternoon, there they were: two Silver Arrows CLRs lined up to take the start.

In the midst of the crisis, the team had even called Adrian Newey, who was in Montreal for the Canadian Grand Prix in his capacity as tech boss for the McLaren-Mercedes F1 team. His advice was not to race, to withdraw immediately – but he was ignored.

Arrogance? Denial that its car could be at fault? Whatever, the decision to race was astounding, especially in the context that this was Mercedes, of all teams. For some, the horror of Le Mans 1955 was still within living memory – but history was disregarded.

Like Webber, Dumbreck was too young and too ambitious to argue. And the thing is, the car was quick and the competitive instinct that a win was here for the taking appeared to overrule common sense. Dumbreck was running third and lining up a move on the Toyota ahead of him when it happened, 75 laps into the race.

Just after the kink on the run to Indianapolis, the camera caught the front of the CLR lifting off, like a plane on take-off. It completed three somersaults, flew beyond the barriers and landed out of sight, seemingly in some trees. By pure fortune, Dumbreck landed the right way up and in an area only recently cleared of pine trees. Like Webber, he’d somehow got away with it.

“At the time I was still fairly young: not married, no kids. You are willing to take more risks in life anyway – and I took a lot of risks. I did whatever the hell I wanted, and got away with it.”

After Le Mans, Dumbreck returned to Japan where he had racing commitments. Out of the limelight once again, he admits he lived on the edge – and not just on the race tracks.

“It did change me,” he says. “It had a mental affect on me for a few months. I did cringeworthy stuff, and generally all in Japan. I remember touch-and-go moments where I thought ‘I’m going to have another massive shunt here’, but got away with it. On the road, too…”

Now married with children and still in the midst of a successful professional career, Dumbreck compares it to an extended adrenaline rush that eventually wore off after a few months. And unlike Webber, he drove for Mercedes again.

“They say there’s no such thing as bad PR… I suppose it made me infamous,” he says. “I didn’t have too much to do with it, I was just the passenger.

“Mark and I took different things away from it. I read his book last summer and it was the first time I’d heard his side. My feeling after it was ‘well, I’m still here. So let’s make the most out of it’. When it came to a contract renewal I was offered one for DTM when they were hard-fought-over seats. Maybe I wouldn’t have been without the accident.”

As for Mercedes, no one in the team hierarchy lost their job after Le Mans – perhaps because, through some miracle, no one had lost their life. But it remains a dark chapter in Merc’s history, one most at the company would prefer to forget.

In between 1955 and ’99, Mercedes had won the great race, in partnership with Sauber towards the end of the Group C days in 1989. But it’s fair to speculate, after the events of 20 years ago, that the Silver Arrows will never be seen at the Le Mans 24 Hours again.

Just a moment to thank you

I'd like to just take a moment to praise Damien here for such a well-written piece on the Mercs. It's thoughtful, well-researched and a cut above most automotive journalism today. I know most of these forums are spent taking free stuff and criticizing the writer or other users,  but not this time.

It read like some of the best-written material from back in the days of CAR Magazine. I appreciate that Autocar has to push a huge volume of material out there on this site and should save the best for paying customers, so this was a reminder maybe? For those of us out there reading stuff for free, I'd just like to say thank you.

That was a great piece of writing, thank you. - Cersai

I think postulating that Mercedes will never be seen at Le Mans again is forgetting that manufacturers have short memories where it comes to this sort of thing.  Motorsport at this level is about cold, hard cash (PR, advertising etc), and were the conditions right I'm sure Mercedes would find a way to justify coming back to Le Mans.

Indy car had an entire series of flips due to aero issues before sorting it out.