BACK TO ALL NEWS
Currently reading: From W Series to Bond stunt doubles
UP NEXT
Fisker goes radical with Pear EV SUV

Jessica Hawkins and Naomi Schiff swap their racing suits for stunt harnesses on the latest 007 outing, No Time to Die
Open gallery
Close

The world of Formula 1 was present and correct at the recent star-studded London premiere for the new James Bond flick No Time To Die, as George Russell, Christian Horner, Lance and Lawrence Stroll brushed off their tuxedos for the movie event of the year. But for two racers used to life on the F1 support bill, Bond’s latest adventure represents much more than a memorable night out. W Series racing drivers Jessica Hawkins and Naomi Schiff have one over the F1 boys this time – because they are both actually in the film, as stunt drivers.

It’s a little different from the day job. “In racing, you are always trying to correct the car, whereas in stunt driving, you want a bit of flair. As soon as it goes sideways, you want to keep it there,” says Hawkins. “They are two different worlds.”

The 26-year-old British racer currently lies 10th in W Series ahead of the double-header season finale later this month in Austin, Texas, while Rwandan-German Schiff, 27, is a reserve driver for the all-female single-seater series. Both fell into the movie business by chance, although Hawkins had a head start on Schiff before they ended up on the Bond sets.

“I was really lucky: I had three months’ intensive training,” says Hawkins. “Stunt driving was literally my 9-5 job, travelling Europe in a show called Fast and Furious Live. You can’t have a better stage for learning, because when it’s live, you can’t mess up. Through that, I made a friend who knew Lee Morrison, who is the stunt co-ordinator for No Time To Die. Lee was looking for a female stunt driver and I went for an audition with him. He set out six cones, showed me a routine, then got me to do what he’d just done. I got it first time, wound down the window and he said: ‘Welcome to the team, Jess.’ That was a great sentence to hear.”

“My story is slightly different,” says Schiff. “I didn’t have any intensive training beside my racing experience, which, as Jess says, is quite the opposite of what they usually want you to do on set. I was contacted via Instagram by someone who said they wanted me ‘to double for one of the actors who looks like you in the new Bond film’. I assumed it was a joke and just ignored it. A few days later, I received a similar message on Facebook. It turns out it was for real. Similar to Jess, I was invited to a test with Lee Morrison.”

When she arrived, Schiff was met by a friendly and familiar face. “Jess was there to help me to learn as quickly as possible,” she says. “Funnily enough, we’d met a week earlier for W Series selection tests. I had to do the same thing as Jess, but without the training, so Jess was in the car with me, giving me tips. We ripped through a couple of sets of tyres and I managed to get through everything they wanted. It was an adventurous day.”

It’s been well publicised that No Time to Die was long-awaited because of painful release delays caused by Covid. Those auditions were back in early 2019 and the drivers completed their filming later that year. “I only went down the stunt driving route because I’d run out of budget to go racing,” says Hawkins. She also raced in the inaugural W Series that year, which fortunately concluded before she was due on set. “When W Series finished [in August 2019] I went straight from there to Bond for six or seven weeks in Italy. I also did some filming after that back in the UK.”

As with many of her rivals, W Series saved Hawkins’ racing career because drivers are hand-picked and don’t have to bring a budget. Before 2019, she’d almost given up on her lifelong ambitions. “In a strange way, pulling out of racing because I’d run out of money, while it was incredibly disappointing at the time, was actually a blessing in disguise,” she says. “It’s opened up a whole new world to me.”

“We were really lucky,” says Schiff. “One thing Jess said to me was the film industry doesn’t stand still for anybody. We were both desperate to get into W Series because we didn’t have a budget for racing and this was our first opportunity for a long time to do a full season. But obviously we also wanted to be in the film, so we needed the dates to work with each other. And they ended up working perfectly.”

In the movie, Schiff doubles for Nomi played by Lashana Lynch, who has taken over Bond’s 007 status. That meant filming scenes in Aston Martins, the DB11 and Valkyrie. As for Hawkins, she doubled in the driving and passenger scenes for Madeleine Swann, played by Léa Seydoux. (Another double, who also happens to be called Jess, appears in Seydoux’s fighting and non-car scenes.) “I’ve seen the film twice now,” says Hawkins, who rubbed shoulders with the stars at the Royal Albert Hall premiere. “I enjoyed it the first time and it was even better the second. I was in a Land Rover Defender and there’s a big scene. It was such a cool experience to see everyone’s hard work, especially on the first night. It really was quite emotional, especially because there has been a little bit of a wait. Everybody was just so happy to see it.” 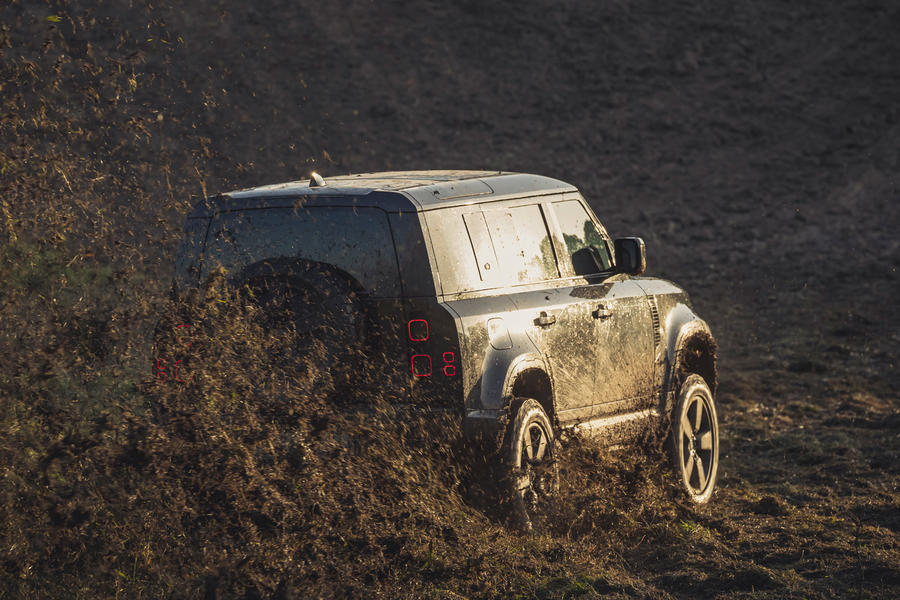 Did many of her stunts make the final cut? “My girlfriend was with me for the premiere and said: ‘Tap me every time you’re in it.’ I ended up tapping her quite a lot!”

Schiff is less sure how much she features – because when Autocar spoke to her, she hadn’t seen the film. A script rewrite and the much-publicised change in director mid-shoot, from Danny Boyle to Cary Joji Fukunaga, might also have affected her screen time. “But my stunt did end up in the trailer, so I know that much!” she says. “I’m in Paris, where my boyfriend lives, so I thought we could watch it together. But it’s not being released here until next week. It’s so frustrating. I’m heading back to London to watch it by myself!”

So were they on set with the movie stars? Hawkins wasn’t, but Schiff had an experience she won’t forget. “I got the call quite late and they said: ‘Can you be at this location tomorrow?’ I had to drop everything, pack a bag and leave. I got there the next day, they said go and get hair and make-up done and then we’ll inform you about what you’ll be doing. I sat down and five minutes later Daniel Craig walked in and introduced himself – as if he needed to! That was mind-blowing. Lashana was lovely to double. She made me feel really comfortable and was so welcoming. I really enjoyed my time on the movie.”

Given the time delay to release, both racers have completed other movie projects since Bond wrapped, on one occasion working together again. So are they racers or stunt drivers now? Difficult question. “I’m juggling both,” says Hawkins, who made two starts in the British Touring Car Championship last year, an arena in which she’d like to return. “I’m sure there will come a point where I’ll need to pick one over the other. At the moment, I’ve had to turn a few things down because they clash with W Series and that is taking priority. As long as I have a drive in W Series, that will probably always be the case. But at the moment, I’m loving both, and when racing maybe is no longer a thing, I’ll give it 100% of my time.”

“I consider myself really lucky to have stumbled into it – via Instagram!” says Schiff. “In some ways, it’s similar to racing because you have to perform on the spot and there’s the pressure that comes with that. But I love it and the beauty of the industry is that most of the time they are not using our faces. Having a career as a stunt person has more longevity, so I definitely want to continue and for quite a long time.”

She also points out a recent change in legislation that will boost their movie prospects. “If you can find someone of the right gender and ethnicity who has the right skills, you should use that person before someone who is not of that description,” says Schiff. “That is good for people like Jess and myself. I hope the calls keep coming.”