BACK TO ALL NEWS
Currently reading: 2021 Formula 1 Dutch Grand Prix preview
UP NEXT
Rodin FZero: V10 weapon aims to be world's fastest car

As Max Verstappen's orange fan club prepares to descend on Zandvoort, we look back at past clashes
Open gallery
Close

The Max Factor. That’s the simple reason why the Dutch Grand Prix is returning to the Formula 1 schedule this weekend, a mere 36 years since the last was run at Zandvoort.

Max Verstappen’s sensational popularity has triggered a surge in F1 interest within his small home nation, as a dedicated ‘orange army’ of fans travel around the world to loudly cheer their hero. Now they will cram into their own circuit in the sand dunes this weekend to create an atmosphere to match and perhaps surpass anything Monza and Silverstone can throw up. Sir Lewis Hamilton must be dreading it.

Hot on the heels of the debacle at Spa-Francorchamps, F1 desperately needs a fantastic weekend memorable for all the right reasons at Zandvoort, previously a popular mainstay of F1 that hosted 30 world championship grands prix in 33 seasons between 1952 and 1985.

The circuit is a shadow of the wonderful, sweeping circuit used back then; the second half of the lap is now covered in holiday homes after the track hit financial trouble in the late-1980s. But there’s still plenty to like about the modern 2.64-mile track, which now features two heavily banked turns: at Hugenholtz, the left-hander behind the pits that leads the drivers out into the dunes; and the new 18deg final corner, Luyendyk, will hopefully slingshot cars down the start/finish straight and provoke some overtaking into the 180deg Turn 1, better known as Tarzan. A corner name has never been so apt: it’s hard-braking wild and hairy.

Zandvoort is dripping in rich F1 heritage. Jim Clark scored a hat-trick here between 1963 and 1965, then added a landmark victory in 1967, when Lotus rocked up and changed the F1 world with the Type 49, powered by the new Ford Cosworth DFV V8. James Hunt starred here too, scoring his famous breakthrough win in 1975 by defeating Niki Lauda’s Ferrari for plucky British privateer Hesketh. But Lauda had his great days at Zandvoort too, winning in 1974 and 1977, then adding a third victory in a McLaren during 1985 – the last of his 25 GP successes, in his swansong season.

Zandvoort’s last F1 grand prix before this Sunday was quite a race. Nelson Piquet stuck his Brabham-BMW on pole position, only to stall at the start, leaving Keke Rosberg to lead for Williams – until his Honda turbo blew. That left the race to the McLarens, Lauda leading Alain Prost.

Having pipped the Frenchman to the 1984 title by half a point, Lauda found himself well and truly second best to Prost through most of the following season – and the writing was on the wall that a great career was coming to a close. But he had led at home in Austria, only for a Tag turbo failure to spoil the big farewell. Now at Zandvoort he led again, emerging from his single pitstop with a 17sec lead over Prost, whose own tyre change had proven tardy. But with 30 laps to run, Prost pushed and closed in for the kill. 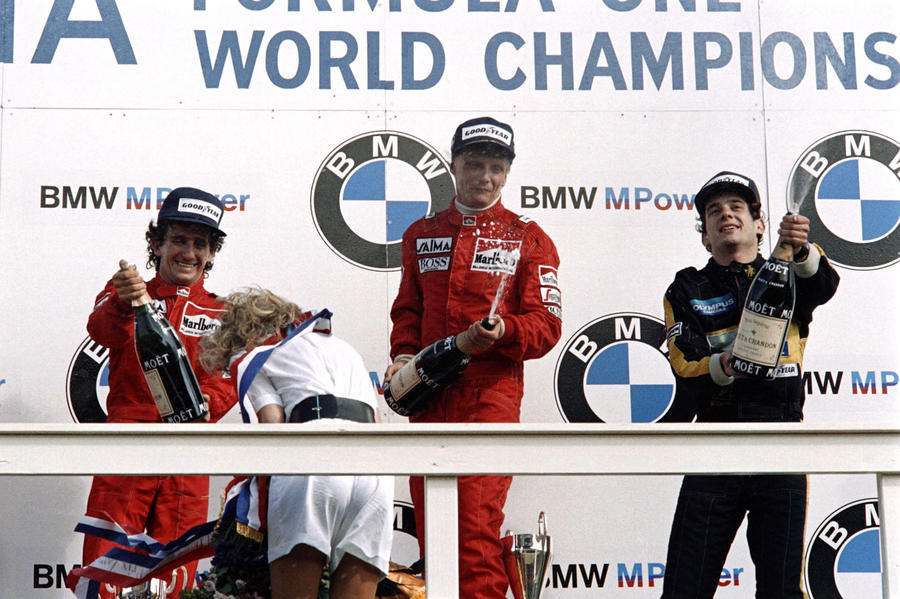 The thing is, Zandvoort always was a tough place to overtake (as the class of 2021 will find this weekend), and Prost could do nothing about his wily old team-mate once he was on his tail. Lauda shot across the line for his final win just 0.232sec ahead of his team-mate, who would now prove unstoppable on his way to a deserved and long-awaited first world title. Ayrton Senna was third for Lotus, keeping at bay Michele Alboreto. The Ferrari man was still just three points behind Prost in the standings, but his bid to become the first Italian champion since Alberto Ascari in 1953 was already spent. Thirty-six years later, Italy still awaits Ascari’s successor.

Verstappen arrives at his home track three points down on Hamilton in their own title battle, following his ‘victory’ in Belgium. Perfect timing, then, for the Red Bull-Honda ace to jump back to the top of the F1 charts in front of his klaxon-blaring orange army.