BACK TO ALL NEWS
Currently reading: Leclerc drops his Ferrari as Verstappen wins at Imola
UP NEXT
Quarter of UK cars produced in April were electrified

Leclerc drops his Ferrari as Verstappen wins at Imola

Charles Leclerc will want to forget the 2022 Emilia-Romagna Grand Prix, and quickly. But he shouldn’t put it behind him too rapidly, because there’s a thorny lesson that must be fully digested first.

You could tell from his face on Sunday, then the sack-cloth-and-ashes comments later, that the man carrying Ferrari’s hopes of ending a Formula 1 title drought dating back to 2007 knew how badly he had blundered by spinning out of third place at Imola.

Unforced errors… there’s nothing more aggravating, and the worst thing is you have no one else to blame but yourself. This was definitely one of those.

Red Bull was untouchable at the weekend as Max Verstappen scored a glorious ‘grand slam’ – pole, win, fastest lap – and on this occasion a sweet victory too in the first sprint race of the season.

The reigning champion had lost out to Leclerc at the start on Saturday, only to pass the Ferrari without too much stress, tipping a spoonful of added sugar to his increasingly tasty brew. Then on Sunday, he was in a class of his own.

Leclerc was worried and depressed by Red Bull’s superiority, but perhaps he should shrug that off too. This is already looking like a season in which form will swing from race to race, and Ferrari will likely bounce back.

But if Leclerc wants to be champion against a peer who hasn’t yet peaked, he needs to sort the unforced errors, and now.

Instead of third, Leclerc finished sixth, having dropped to ninth to replace the damaged nose of his F1-75. That’s seven points chucked away in a race where Verstappen swung from a 45-point deficit to a shortfall of just 27. Painful. 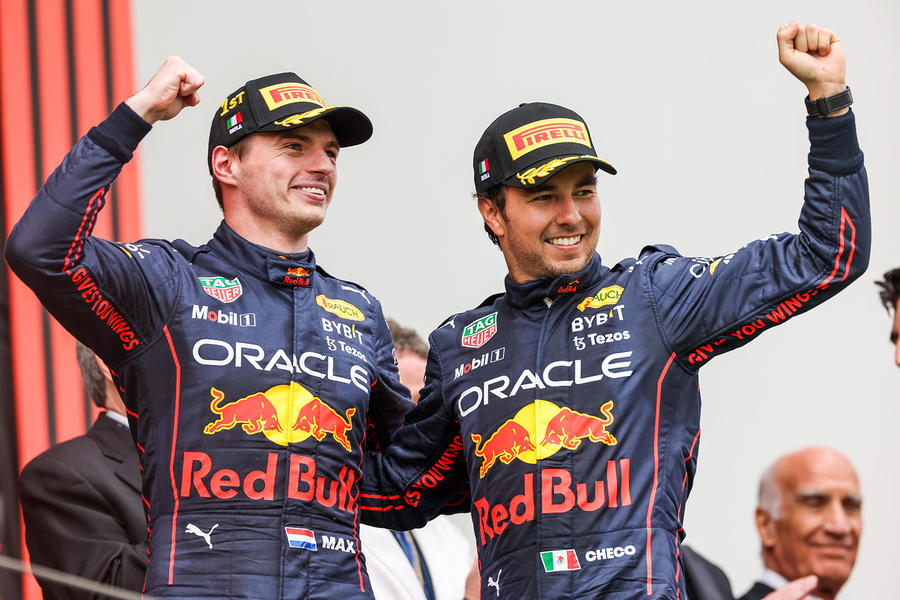 Beyond the top two, plus Sergio Pérez completing Red Bull’s joy with a fine drive to complete a team one-two, there were wide smiles for Lando Norris with an inherited but still merited podium third. Given where McLaren were a month or so ago, the turnaround at Imola was little short of astonishing.

Behind him, his old mate George Russell provided a solitary ray of sunshine for Mercedes-AMG as Sir Lewis Hamilton toiled.

The seven-time champion started 14th and finished 13th, staring at the back of Pierre Gasly’s AlphaTauri for most of the afternoon – then found himself lapped by old foe Verstappen. No wonder team boss Toto Wolff apologised to Hamilton for the car he has given him this year.

How quickly the world has turned. And the strange thing is there doesn’t appear to be a quick fix for F1’s most successful team to dig itself out of a mire entirely of its own making.

Russell was chased home by Valtteri Bottas in his Alfa Romeo, a year on from the pair’s high-speed collision on the way into Tamburello. How sweet for the Finn to be pressuring the man who replaced him.

And there were reasons to smile at beleaguered Aston Martin too, as Sebastian Vettel and Lance Stroll delivered a double-points haul, in eighth and 10th respectively.

Before Imola, the green team was the only one that had failed to get off the mark in 2022. Monkey well and truly kicked from its back, then.

If Sainz does not regain calmness, Ferrari and Leclerc wiill not be champions.

Let's just that Tracks like this kind of neuter Ferrari's advantage, and, while it was good victory for Redbull I can't help thinking that Verstappen,as the season goes on, will throw the Championship by doing some madcap racing.