BACK TO ALL NEWS
Currently reading: BTCC 2022: two wins earn Cook championship lead
UP NEXT
Spending 48 hours touring in a Ferrari Roma

Josh Cook claimed another double in the latest BTCC action, following up his success at Brands Hatch earlier in the month.

It means the Honda Civic Type R racer is now the most successful BTCC driver ever at Thruxton and newly puts him atop the championship, with a 23-point lead.

Cook couldn’t manage the triple, though, as the final race of the weekend was won by Adam Morgan, the BMW driver earning victory in the same weekend as his 300th start in the BTCC.

Meanwhile, Ash Sutton grabbed three podiums to keep his title challenge quietly alive. The Ford Focus ST driver has yet to win after switching to a front-wheel drive car, but his consistency is paying off, as he lies second in the standings.

Pole man Cook didn’t get the cleanest of getaways but managed to find his way past the faster starting BMW 3 Series of Jake Hill at the first chicane and from there rarely looked troubled.

The action was more focused on the following pack, as Sutton survived 16 laps at the head of a gaggle of cars to finish third. Dan Rowbottom was the main challenger and briefly managed to get past, but when Sutton retook the spot, he dragged Colin Turkington through with him.

Sutton ended up third, followed by Turkington and Rowbottom, all of them covered by less than 1.5sec. 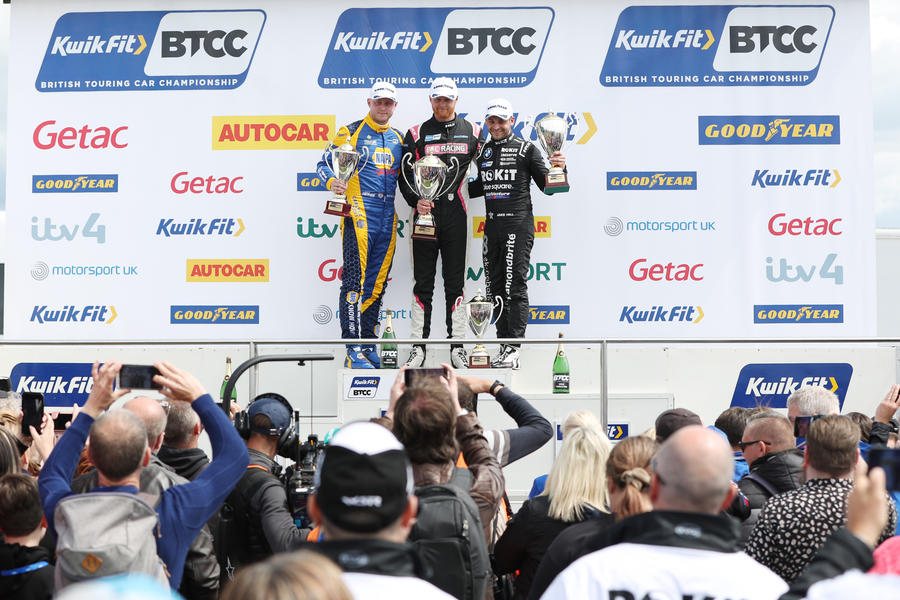 Cook’s ‘move of the season’

We may be only three weekends into the 2022 championship, but Cook’s move around the outside of Hill at Club (having again lost out at the start) was labelled the "move of the season so far" by ITV commentator and former BTCC champion Tim Harvey.

Afterwards, Cook explained how he planned the overtake: “I messed up the start quite badly, so I needed to try and recover from that. Jake got a really good first lap. Normally the rear-wheel-drive cars struggle a little bit through the high-speed stuff in the first part of the race, but he was just switched on straight away.

"There was just one opportunity – I think it was Jake last year who pulled that move on [Tom] Oliphant – as I was coming round the back straight it was in my mind, and I thought, ‘I’m going to give that a pop’ and luckily I just got it.

Having notched up his record 300th BTCC start earlier in the day, Morgan blasted past pole sitter Jason Plato at the start to lead a four-car train throughout most of the race.

Turkington and Sutton also got past Plato at the start, but the veteran was back in the hunt for a podium by mid-distance, the quartet pulling clear of the chasing pack. Sadly, a slight scrape with Sutton pushed him out of contention before an accident at Church - the fastest corner in the country - meant that Plato’s weekend was over.

Morgan, Turkington and Sutton ran in that order to the finish, with just over a second separating all three at the flag.