Before the season kicked off last weekend at Brands Hatch, we had a go in Honda's contender for BTCC honours
Open gallery
Close

Mattandflash. Flashandmatt. People in and around the Halfords Yuasa Racing Honda Civic Type R British Touring Car Championship team say it like it’s one word: “Mattandflash will be at the track in the morning.” “Have Flashandmatt been out in the cars yet?”

It takes a moment to realise they’re talking about Honda drivers Matt Neal and ‘Flash’ Gordon Shedden (see what they did there?), each a three-time BTCC champion. Both lovely fellas. Both very fast. Both team mates, on and off, since 2006, and always since 2010, hence they’ve become rather tolerant of each other.

So lets rewind back to when they were at Parcmotor Castellolí, not far from Barcelona, Spain, for pre-season testing (see how they got on in the first round of the 2017 season here), where the weather is consistent and where there’s a quite frankly brilliant circuit that could be straight out of Gran Turismo. The circuit has such a vast gradient change and dramatic rocky backdrop that it I can’t believe it isn’t used more for events. It’s 2.5 miles long but squeezed into a relatively small area. Annoyingly, the track is not pictured here, but

Not that things always go smoothly, even when vast armies of articulated trucks are assembled. Some teams there ran out of fuel because the stuff they’d ordered didn’t arrive (the delivery driver instead went to the Catalunya circuit, where Formula 1 testing was taking place). Early the next morning about nine pallets packed with fuel drums – about twice as much as the teams ordered or would need – turned up and figuring out how to get it all home was quite the task.

Meantime Mattandflash had started testing. Gradually. One of the advantages of this year’s Halfords Yuasa Racing Honda Civic Type R – some distance from being the most convoluted team/car name, after the Team Shredded Wheat Racing With Duo Ford Focus – is that a fair amount of it is carried over from last year. Mattandflash tested the bits that have had to be updated as a result of a rule change some years ago. A new supplier was appointed for some control components, but teams were, for a time, allowed to pick and choose from the old supplier or the new one. This season everything has to come from the new one. There were new tyres to test, too.

They are bigger, to better cope with demands that cars place on them as they get faster. Some tyres were marginal last year, particularly a soft ‘option’ tyre that teams are required to use at various stages in a race weekend. Like success ballast, where winning cars are given weights to carry, it’s a slightly contrived way of making the racing closer and allowing smaller teams to target certain races they want to do well in. And, like the success ballast, it works: there’s a 32-strong grid and the racing is extremely close this season (see how the first round at Brands Hatch went here) 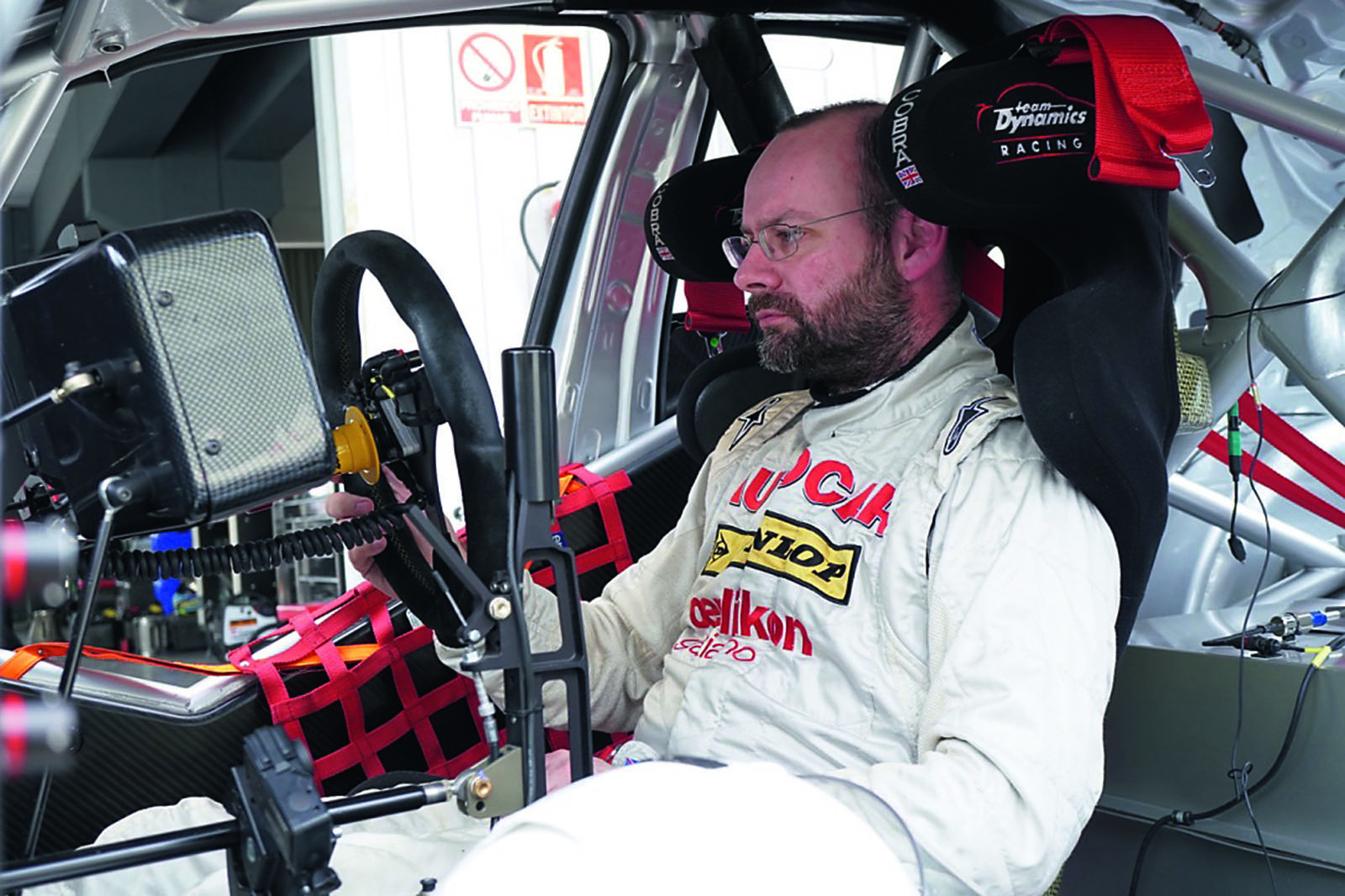 What’s it like, then, this Team Halfords Yua…this Civic? Flashnotmatt lends me his for a while. It’s hard to get into, like most racing cars, and you sit very low – Shedden more than most drivers – so you can’t see anything within about 20 metres of the front of the car. A Civic is not a large car but it feels like a Rolls-Royce Phantom, and even Shedden admits he can’t see most apexes. It’s pretty intimidating. It starts on a button and throttle response is sharp. There’s plenty of torque, though; the rev limit is above 7000rpm but because this is a 2.0-litre turbo there’s bags of oomph through the mid-range. Mattnotflash smiled when I asked how much power it makes. “We say it’s about 360bhp, don’t we?” he asks an engineer. So reckon on it being nearer 400bhp. These days, though, some hot hatches aren’t far off that, so the Civic isn’t brutally fast in a straight line.

Once you’re under way you can forget the clutch; the sequential gearbox’s lever wants a confident pull, but the brakes are well servoed and the steering extremely light, so it isn’t a physical car to drive. At least it’s not at the speeds I drive it at – there’s more lateral and braking g when real drivers are involved, obviously. And the steering gains no particular weight in corners. Road car engineers like to add extra feel and weight as cornering forces increase, to give drivers something they feel like they can lean on. The race Civic does have exceptional steering feel and frankly extraordinary agility, but the messages about both come filtered delicately through the rim.

In short, like most racing cars it’s way too good for me. How you get the best out of it with 31 other similarly paced cars around you is anyone’s guess, and anyway, it requires a proper ‘hand’ at the wheel. Which is why BTCC this year, like all years, is worth watching.

The Civic “should be at the front of the front-wheel-drive cars,” according to Neal, while his team-mate Shedden “won it last year, so he should be confident”.

Drivers of rear-drive cars “all complain about front-wheel drive, and we do the same about them,” says Neal.

“So I’m just doing the party thing. But that BMW was very good last year; it should have won. Sam Tordoff led the championship going into the final weekend but nicked defeat out of the jaws of victory. If they’d have had Shedden, Colin Turkington or Jason Plato in that car, we wouldn’t have won it. He just cracked. So they’ve got a very strong driver line-up this year, with Jordan, Collard and Turkington. Now they’ve got good financial support from BMW, they’re going to be a tough act.”

“Subaru was there at the end of the year in 2016, and if it hadn’t started the season with so many dramas, they’d have been fighting us [for the title] at the end of the season. And Jason [Plato]: if he smells victory, you see a different him altogether, so they’re going to be tough.”