BACK TO ALL NEWS
Currently reading: The cheapest way to do 150mph
UP NEXT
UK car finance tightened to become 'fairer' for customers

The cheapest way to do 150mph

New £80k XFR-S too rich for your tastes? Lewis Kingston buys a fast Jag for a fraction of the cost and finds out what it'll do
Share
Open gallery
Close
Share story

Editor: “How cheaply can you do 150mph?” “Five hundred quid,” I said, confidently.

“Well, you’ve got five days,” came the reply. Worse still, my mission wasn’t to find any old lash-up, but a clean and usable car with some tax and test to its name.

My mind started whirring. Before I’d even got to the classifieds, I was mentally shortlisting the likely candidates for the job, like the V8-engined Lexus LS400, a BMW 7-series or numerous turbocharged Saabs and Volvos. A quick bit of research later and the Lexus remained the favourite, although others like the turbocharged 20v Fiat Coupé and Vauxhall Omega V6 had promise.

A methodical trawl of every classified site available eventually dug up two candidates that were nearby and potentially within budget. One, a clean-looking 1996 Lexus LS400, would have been capable of around 155mph when new. It was ready to go and the seller was open to offers, but I was ultimately outbid.

The other, a 154mph Alfa Romeo GTV 3.0-litre V6, had covered an interstellar 221,000 miles and was up for £800. I rang up and told the dealer I’d give him £500 for it, on the basis that I was probably the only person on the planet who would actually buy a GTV with 221,000 miles on the clock. He said something unrepeatable, which closed that particular line of enquiry.

With the deadline rapidly approaching, I started widening the search. Then, there it was: a classified advert for a 1995 Jaguar XJ Sport, with the smooth and durable 4.0-litre ‘AJ16’ straight six. When it was factory fresh the XJ would have been capable of clocking 143mph, but I convinced myself that Jaguar had probably downplayed its top-end performance in order to create a bigger differentiation between it and the 155mph supercharged XJR.

The XJ's engine also benefitted from a timing chain, rather than a belt. So many cars on my list used cambelts, which were all no doubt long past their recommended servicing intervals. I dreaded the thought of hearing a distant 'snap' and the subsequent terminal chatter of valves being introduced to pistons at a vast rate of knots.

A quick bit of bistromathematics suggested that the Jaguar was theoretically geared – on its current wheel and tyre combination – to do over 160mph. I just hoped the XJ wasn’t a tachophobic. It was advertised for £575, but I figured the seller would probably take £500 cash for it and put in a call.

Two days and a holding deposit later, the XJ proved to be much as expected: a well used 18-year-old example with some minor dents, light corrosion, missing bits of trim and a tired driver’s seat. Everything important worked, though, and the car was very solid overall. Four decent matching tyres also made me feel a little more confident. A quick test drive revealed it to be delectably wafty, so, with the negotiations completed, it was mine.

With the Jag safety checked, cleaned and topped up with fluids, we headed up to Bruntingthorpe proving ground in Leicestershire. Its two-mile-long runway would hopefully give me enough room to find the Jaguar’s terminal velocity in complete safety, and there was plenty of space in which to recover if things went awry.

An initial sighting lap, taken at a gentle pace, revealed that the Jaguar was more than happy to tick along at 100mph. It was steady, tracked straight and was only moderately perturbed by the crosswinds that gusted across the track. More impressive was the fact that it stopped in a swift and controlled fashion.

I donned my helmet and, after one last pre-flight check, it was time to open the taps and see what the venerable XJ could really do. I put the transmission in Drive, switched into Sport mode and, with the rear wheels almost hanging off the runway, let fly. At the halfway mark the timing gear indicated 110mph, and as I neared the braking point it had just nudged up to 131mph. 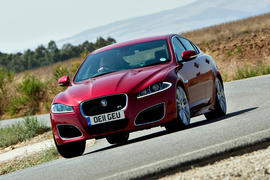 That wasn’t to be sniffed at, but I got the feeling the stately old Jaguar didn’t have much more to give. What did surprise me, however, was how effortlessly it had done it. No vibrations, no issues – no mechanical protestations at all.

I chose to run the Jaguar through the gears manually on our next attempt. It fluttered against the limiter briefly in second, throttle pinned to the floor, and surged onwards with much more conviction when I shifted into third. The improvement was notable, and it clocked an impressive 140mph at the end of the straight, passing a startled and bemused biker who had nailed his Triumph Tiger Sport to its maximum of 135mph.

In an effort to eke more out of the Jag, a colleague and I set about cutting drag by taping it up around the nose, bonnet and door seals. We also ditched the spare wheel, rear seat squab and some interior panelling to cut the weight. It was a quick, rough job but nothing ventured, nothing gained. With my new, aerodynamically revised and lightweight XJ warmed up, I headed out for what I hoped would be the fastest run of the day.

The Jaguar sprang from its trap and barrelled down the runway, tracking arrow-straight and true. One-thirty flashed past on the speedometer and the revs were still rising. The Boeing 747 parked at the far end of the runway was growing disconcertingly large in the windscreen. One-forty. With my left foot hovering over the brake pedal, I pushed on until the ‘point of no return’ cone flashed past. Hard on the brakes, down a gear, off the brakes and into the escape road. I glanced up at the timing gear. We’d managed 141mph.

It wasn’t quite 150mph, but it wasn’t far off. Having endured so much abuse, it seemed needless to keep pushing the XJ. After all, it had taken the day’s testing in its stride. The temperature and oil pressure hadn’t budged, no warning lights had come up (not permanently, anyway), it didn’t use any fluids and the tyres were intact. Quite frankly, it was remarkable that it did so well. I found myself thinking that, for £500, we couldn’t have done any better.

Not only had the Jaguar exceeded 140mph, but it had also covered more than 500 miles in the space of 24 hours and proven to be a reliable, comfortable companion.

It had even averaged a very respectable 24.6mpg, and at the end of the day I still had a working car that I could sell on.

enjoy driving it while you can

just enjoy driving that straight 6 beauty. add BG44K to clear out the carbon and enjoy the silky ride. that's the best XJ they made before going down the aluminium route, heavy, thirsty but limo quality ride. like Artill says use it as your long term test and report back to us how it went, how it made you feel (did you feel you were a gangster from Hackney or a pub land lord :-D) and is buying a 2nd hand car like a jag a good deal worth going for because I wish i could....just strapped for cash at the mo

This is a great article. Thanks!

Interesting article and a shame that the 150mph was not achieved. Perhaps Lewis just chose the wrong car? The original Saab 9000 2.3 Turbo launched in 1991 had a speedometer that went up to 140mph but the early cars would go off the end of the speedo ( allegedly !) and achieve 150mph. Would also have fitted the budget if able to find one? Not sure if a 22 year old example would still achieve this though and a longer run way would probably have been needed to stop it at the end!