BACK TO ALL NEWS
Currently reading: 2021 Shanghai motor show: the weird and wonderful
UP NEXT
First electric Lamborghini due by 2030 as two-door GT

Countless oddities were revealed for the Chinese market at this month's show; these are our favourites
Share
Open gallery
Close
Share story

Every motor show has its fair share of weird and wonderful concept cars, some designed purely to grab attention and some that defy the odds and make it to production.

Rarely are there more of these than at shows in China, where the car culture is very different to what we’re used to in the West.

This month's 2021 Shanghai motor show was no exception, with a number of newly revealed cars that give a whole new meaning to words like quirky and eclectic.

Here we’ve rounded up a few of our favourites. 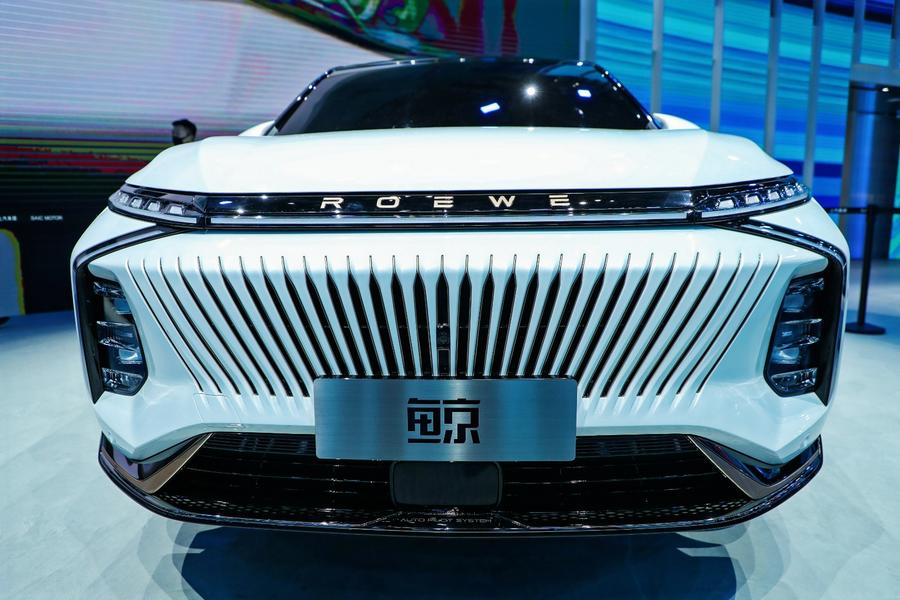 You would be forgiven for thinking that the front end of Roewe’s new SUV looks like a whale – not least because that’s exactly where the car’s designers have got their inspiration from. Jing directly translates from Chinese as whale, and the company says the car follows a philosophy called Emotional Rhythm. This, whatever it is, is meant to rejuvenate the brand, according to its makers. 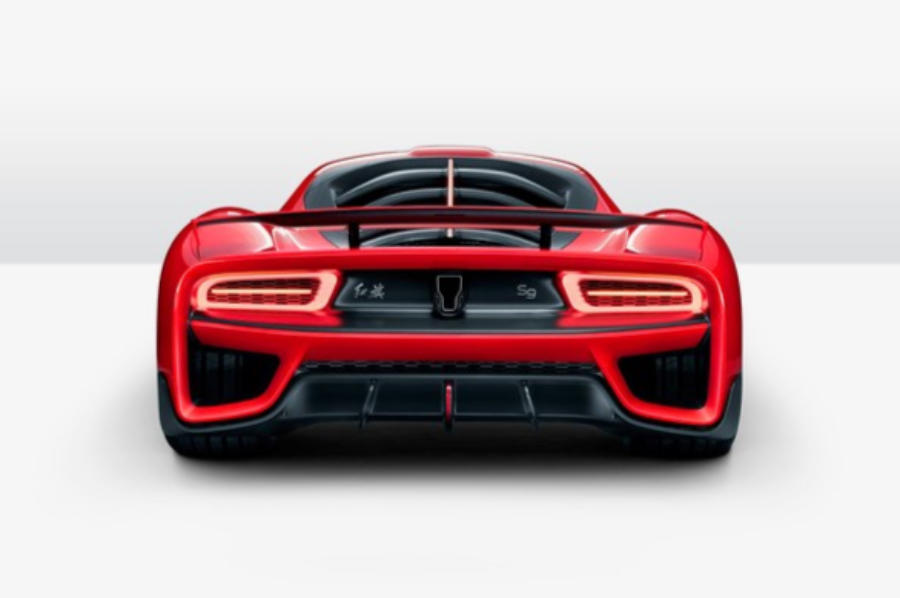 The Hongqi S9 is a new, luxury-focused hypercar designed by Walter de Silva, who worked for Alfa Romeo through the 1980s and 1990s before moving to Volkswagen Group. “Beauty is the first thought when I start drawing,” explained the Italian, who now runs his own design house. Performance details are yet to be revealed, but the original concept car promised 1381bhp and Italian race cars are a major source of inspiration. 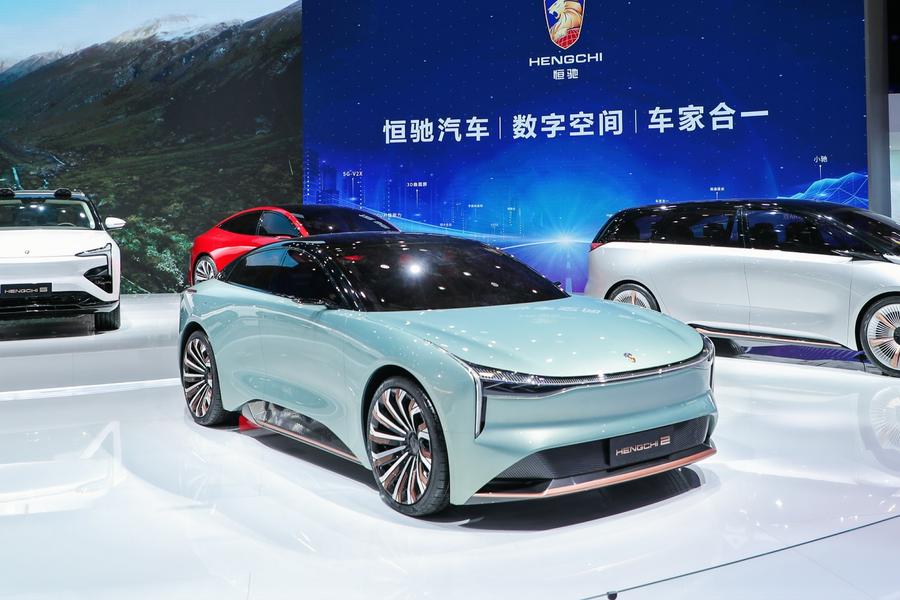 Founded in 2020, Hengchi is an EV brand that allegedly has nine production models in the pipeline already. The 2, a 4781mm-long saloon, was designed by former Mini and Borgward designer Anders Warming, and 444 miles of range is claimed. That’s 39 more than promised in the Tesla Model S Long Range, the longest-range electric car in production right now. The proof will be in the pudding… 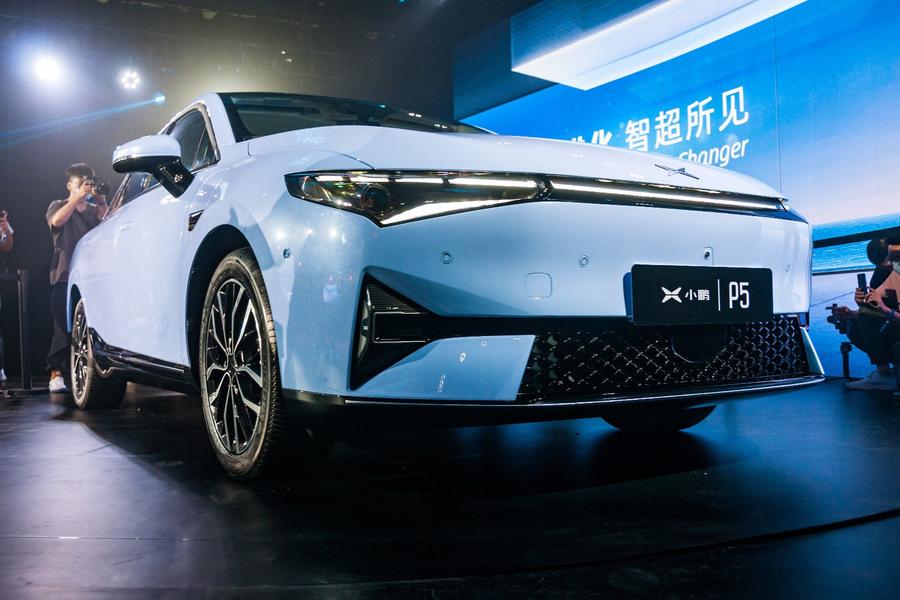 The Xpeng P5 looks like the real deal and, with a rumoured 373 miles of range, it could do very well when it goes on sale in China. Its creators claim they've also cracked autonomous driving tech that works in the city – potentially a massive breakthrough. More worrying is the fact that the saloon’s cabin can be transformed into a bedroom (see gallery), a feature that hopefully won’t be used at the same time as the autonomous driving mode. 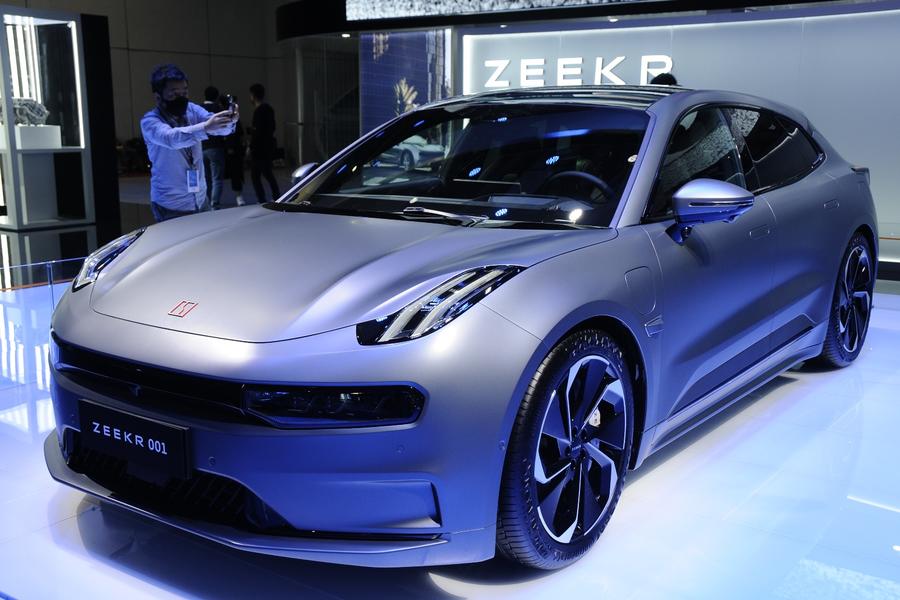 Zeekr, a new brand launched by Geely, revealed the 001 in Shanghai, and intends to sell the electric shooting brake in markets outside of China from 2022. The figures are impressive: 435 miles of range from a 100kWh battery, charging rates of up to 360kW, 536bhp and 0-62mph in 3.8sec. The platform underneath will be used in future Volvo and Polestar models, too, possibly giving us a sign of things to come in Europe. 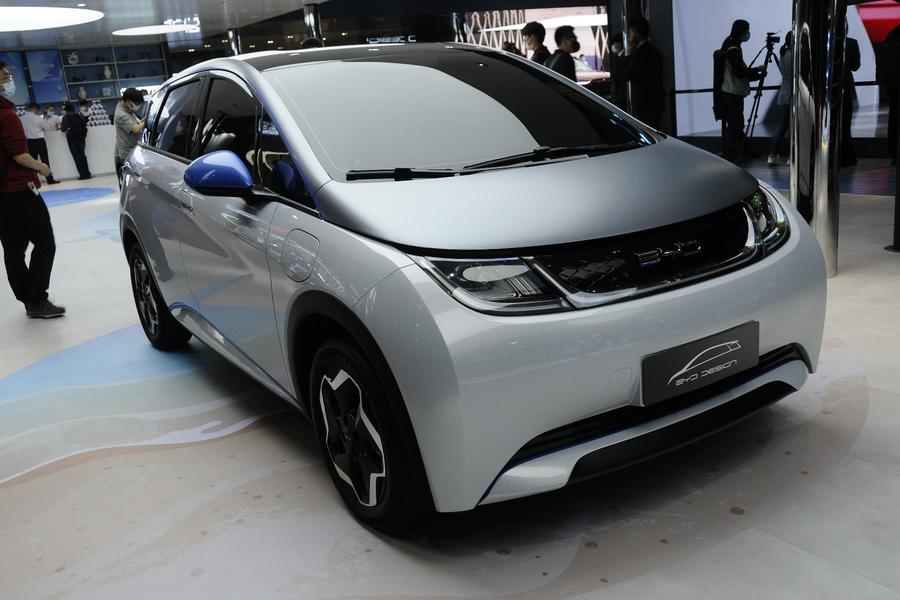 From certain angles, BYD's AE-1 concept bears plenty of similarities to the Volkswagen ID 3. The powertrain on the other hand is something else: the firm claims that the platform within uses an 800V battery and that a range of up to 621 miles is possible. It also promises 0-62mph in 2.9sec – not bad for a four-door hatchback. 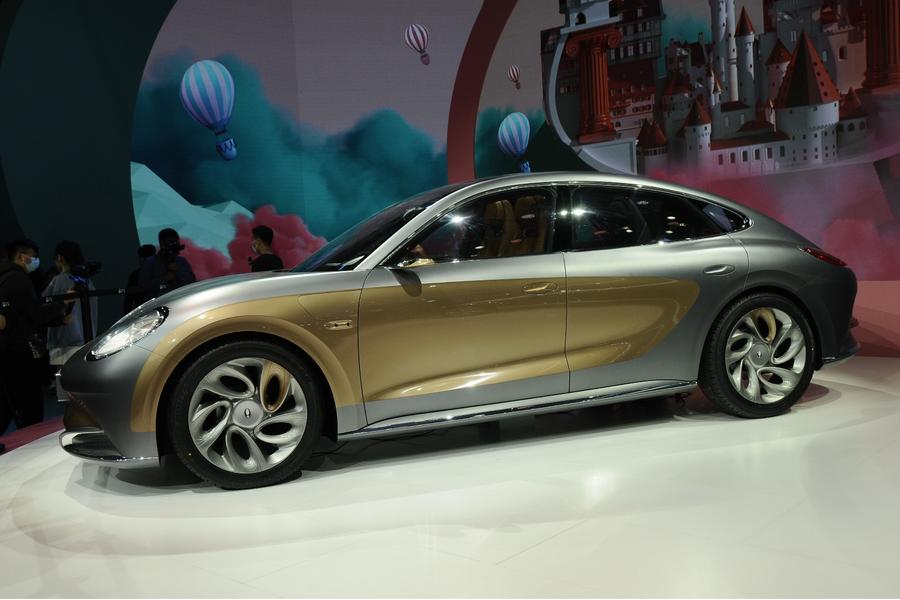 No it’s not a four-door Porsche 911: this is the Lightning Cat concept by Ora, an EV manufacturer owned by Great Wall Motors. Ora says it previews a production car that will be capable of 0-62mph in 3.5sec, thanks to a motor on each axle giving four-wheel drive. The exterior has a two-tone finish that’s matched by the cabin’s tan upholstery. There are screens aplenty too, with the digital instruments and cameras in place of wing mirrors to reduce drag. 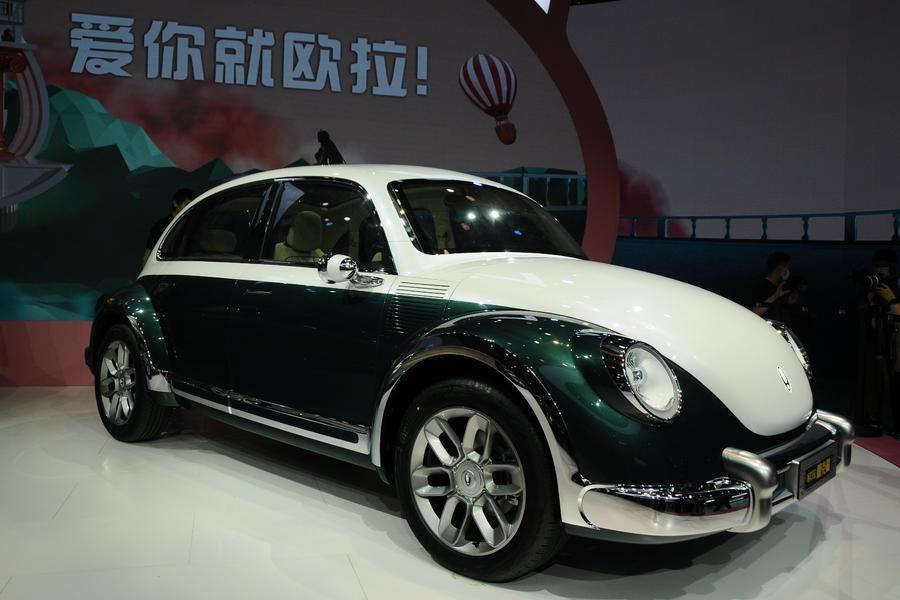 Not satisfied with copying (read ‘taking inspiration from’) Porsche, another Ora concept draws heavily from the classic Volkswagen Beetle. A vote to decide on a name for the EV ended in it being christened the Punk Cat, although there’s nothing punky about the green, red and cream interior (see gallery). At least we now know what it would look like if a guest room at Blenheim Palace was crossed with a branch of Cath Kidston. 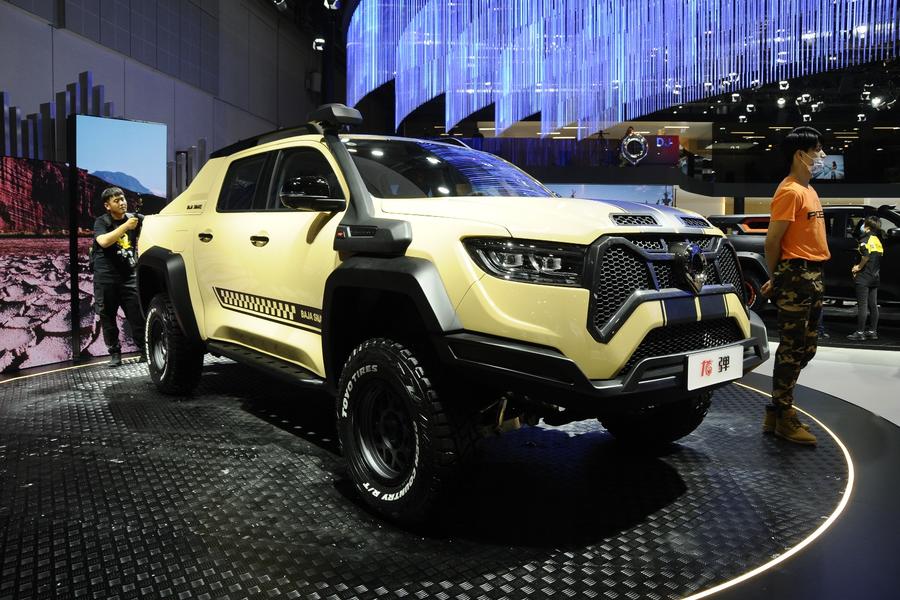 This off-roading truck from Great Wall is allegedly inspired by Shelby. Called the Baja Snake, the heavily fortified truck is based on the Cannon pick-up, bringing a raised ride height, bigger bumpers, new suspension and even an air snorkel to the table. Great Wall says the Baja Snake is a production car that will be sold as a limited-edition model in China, although quite how limited remains to be seen. 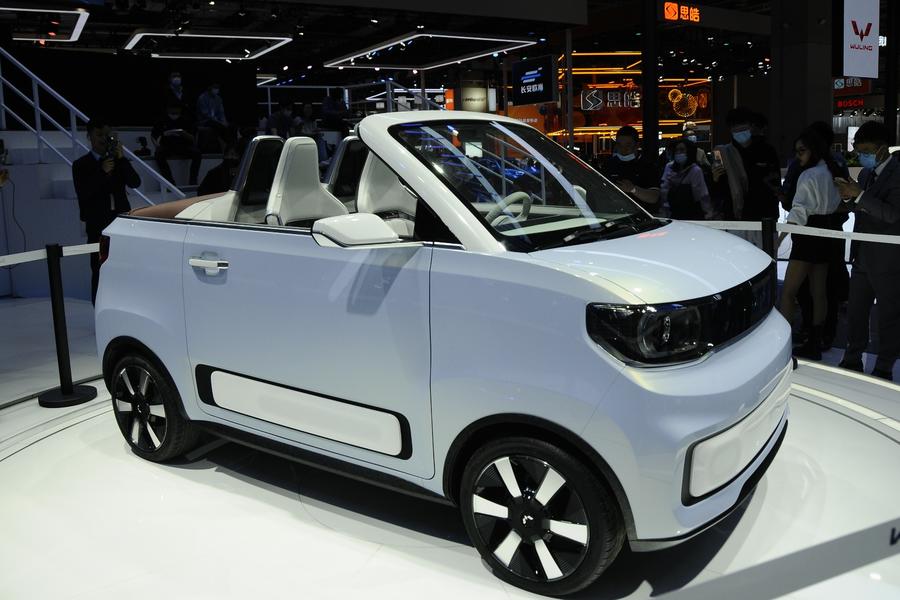 The Hongguang Mini EV has taken China by storm following its launch last year, helped by its price tag of just £3200 and a 100-mile range that makes it ideal for life in the city. A convertible version is now in the pipeline, complete with a mechanically operated soft top that can retract and deploy in a matter of seconds. A production model is set to arrive next year and, given that the hardtop is less than 3000mm long, it will be one of the smallest cars on sale. 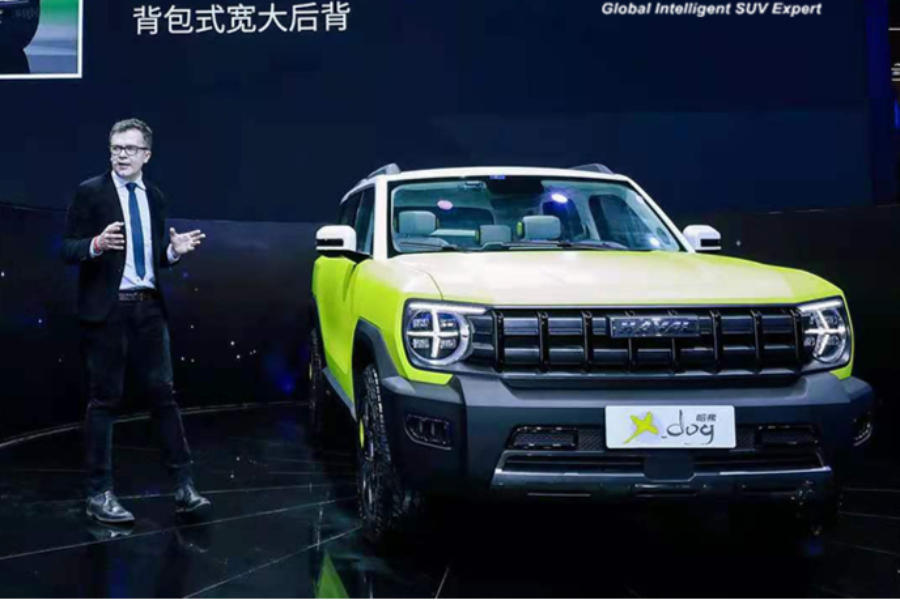 Haval revealed its Big Dog SUV not so long ago, and the X-Dog is a concept for a model that’s set to launch sometime in 2022. Part Suzuki Jimny, part Kia Soul EV in its design, the X-Dog has gone to town with screens inside. There are no fewer than six in the front of the cabin alone: two on the extremes of the dashboard, one in the steering wheel, a digital instrument display, a central touchscreen and a further display in the centre console. There are physical buttons for the boot and fuel filler cap, but that’s about it.

2019 Shanghai motor show revisited: full report and all the news