BACK TO ALL NEWS
Currently reading: Kia announces pricing of Ceed GT-Line and 201bhp Ceed GT
UP NEXT
New 2021 Toyota Camry brings styling and interior tweaks

Alongside the new Proceed shooting brake, Kia has announced UK prices and specifications for the GT and GT-Line variants of its new Ceed hatchback.

GT-Line models, available from £21,535, borrow much of their styling of the range-topping GT, but without the powertrain and suspension upgrades. They can be had with the familiar 1.0-litre and 1.4-litre GDi petrol engines producing 118 and 138bhp respectively, or 138bhp 1.6-litre diesel.

Buyers have a choice of the same six-speed manual or seven-speed dual-clutch automatic gearboxes as the larger Proceed, with top speed ranging from 118mph for the 1.0-litre variant to 130mph for 1.4-litre engine and manual gearbox.

An additional six months of testing over the regular Ceed claims to have enhanced cornering behaviour. The Ceed GT sits 5mm lower than that car, with stiffer front and rear springs to improve responsiveness and softer anti-roll bars to boost grip and traction. A new steering rack is said to turn 17% faster than the old model's.

The standard Ceed's 288mm brake discs have been replaced with 320mm ventilated units, which Kia says will reduce the risk of repeated use affecting braking performance. The stability control system has also been retuned, while torque vectoring hardware is standard fitment.

Emilio Herrera, COO for Kia Europe, claims the GT occupies a unique position, as it “doesn’t simply chase the highest top speed or fastest straight-line acceleration. It offers greater agility and grip on winding roads and maximum confidence and comfort at a cruise.”

Kia has tweaked the Ceed’s exterior styling for the GT, too, with upgrades including unique front and rear bumpers, a honeycomb grille with red highlights, 18in alloy wheels and a roof-mounted spoiler. 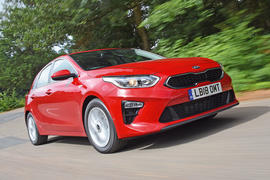 Not bad, not bad?

Saw a prev gen one going down the Motorway and I have to say it’s not a bad shape at all especially the rear which is very tidy not over fussed, almost like a.....Golf though.

As a follow on from the comments on the 308GT which is only available as an auto, Kia have provided both. Respect Kia p.s. I also like you orange juice!