BACK TO ALL NEWS
Currently reading: Lucid Air: 235mph EV to be launched at New York motor show
UP NEXT
New 2022 BMW 3 Series brings redesign and tech upgrades

American electric vehicle (EV) start-up Lucid Motors has announced that it will reveal the Air – a luxurious saloon capable of 235mph – in production form at the New York motor show in April.

First revealed in prototype form in December 2016, the Air is positioned as a rival to the Tesla Model S as well as conventionally powered premium limousines, such as the BMW 7 Series and Mercedes-Benz S-Class.

In entry-level, rear-wheel-drive guise, the Air features a 75kWh battery pack from Samsung and an electric motor producing 395bhp and 443lb ft. It's said to be capable of travelling 240 miles on a single charge and is available to pre-order in the US now, priced from $52,500 (£40,190).

The four-wheel-drive model gains a second motor for a total system output of 1000bhp and is expected to manage more than 400 miles per charge, thanks to a 130kWh battery.

Shortly after the original unveiling, Lucid released footage of the top-spec Air hitting a top speed of 217mph, before taking it to 235mph in testing, suggesting it will become the fastest series-production EV when it launches. 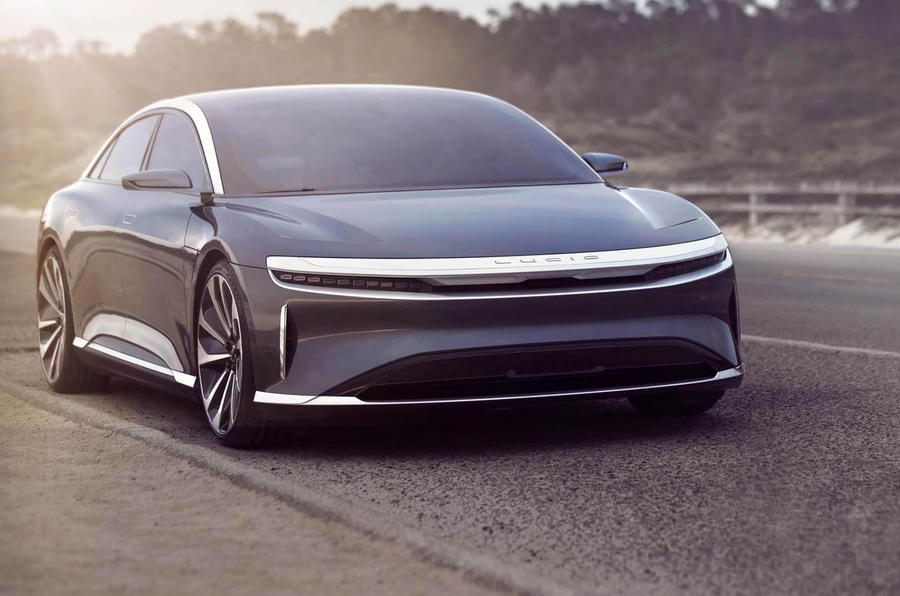 The Air has five seats as standard, but two individual 'executive' chairs are available as part of an interior upgrade. Lucid also claims that air suspension with regenerative valve technology gives it the most comfortable ride in the class.

The Air will offer autonomous driving functions, although it's unclear whether it will feature a comprehensive Autopilot mode like that of the Tesla Model 3. Lucid has said previously that it will equip the Air with the necessary sensors for self-driving functions to be rolled out as legislation changes.

Lucid is currently testing 80 prototypes at its headquarters in Newark, California. Most are said to be “highly representative of the production Air” and will help the company fine-tune aspects such as the steering, suspension and braking.

In November 2019, Lucid began construction of a new factory in Casa Grande, Arizona. It plans to begin full-scale production of its debut model there before the end of this year.

Construction of Lucid Motors factory begins in US​

I do think it's very good looking. Futuristic, but not outlandish.

JackW,
If you have a look on the Lucid website there are a few more pictures on there. The side view is a little more ungainly than it would appear in these shots, but it still looks better than anything Tesla makes.

The pictures of the interior make it look like a fabulous place to spend time, whether as a passenger or driver.

Note to Tesla: THIS is what a luxury EV should look like.

It looks like it belongs in some futuristic Hollywood sci-fi film.  It is just stunning.

Oh, and I couldn’t agree more with Leslie Brook.  395bhp and 443 lb/ft should be enough for anybody.  With that bigger battery in the less powerful car it would be a cracking car.  If it really will sell for less than £50,000, Tesla are going to have some real competition.

I suppose the more expensive car will be the one that will pay the bills though, so I understand the rationale.  Perhaps they could offer the bigger battery as an extra cost-option?

The top spec model doesn't need to do 235mph, it needs to have a 500mile range. Put the big battery in the single motor version, I think 395bhp should be adequate for most people.

The top spec model doesn't need to do 235mph, it needs to have a 500mile range. Put the big battery in the single motor version, I think 395bhp should be adequate for most people.