BACK TO ALL NEWS
Currently reading: 2017 Mercedes-AMG E 63 pricing and specs announced
UP NEXT
BMW opens door to M1-inspired electric supercar

The third-generation Mercedes-AMG E 63, the most powerful series-production four-door model from AMG to date, is on sale now, priced from £78,935.

The standard E 63 comes with AMG Ride Control sports suspension, 19in alloys, a Nappa leather interior and split folding rear seats, as well as two 12.3in screens for infotainment and driver display.

The E 63 S adds 20in alloys, active dynamic engine mounts, AMG performance seats and a leather steering wheel to that. Edition 1 variants get different black 20in alloys, a new paint finish, some Titanium Grey detailing above the side skirts, and carbonfibre trim inside.

A number of different options packs are available. The E 63 S and Edition 1 are avaialable with AMG ceramic brakes for £6996, while an AMG performance exhaust can be added on all models for an extra £1000.

The car was revealed at the LA motor show, with Mercedes claiming it offers the biggest step forward in performance for its new models.

Speaking at the brand's LA press show, Mercedes president and US CEO Dietmar Exler said: "The E 63 is the most powerful car we have produced but it comes with intelligent AMG cylinder management, making it the most efficient AMG. You will pushed to find a car with better power to consumption ratio.

"It is the biggest step forward from one generation into the next."

Indeed, the new E 63 is the fastest-accelerating model ever produced by Mercedes’s burgeoning performance car division with an official 0-62mph time of 3.4sec in range-topping S 4Matic+ guise.

The new E 63 also holds the distinction of being the most powerful series production four-door model from AMG to date. 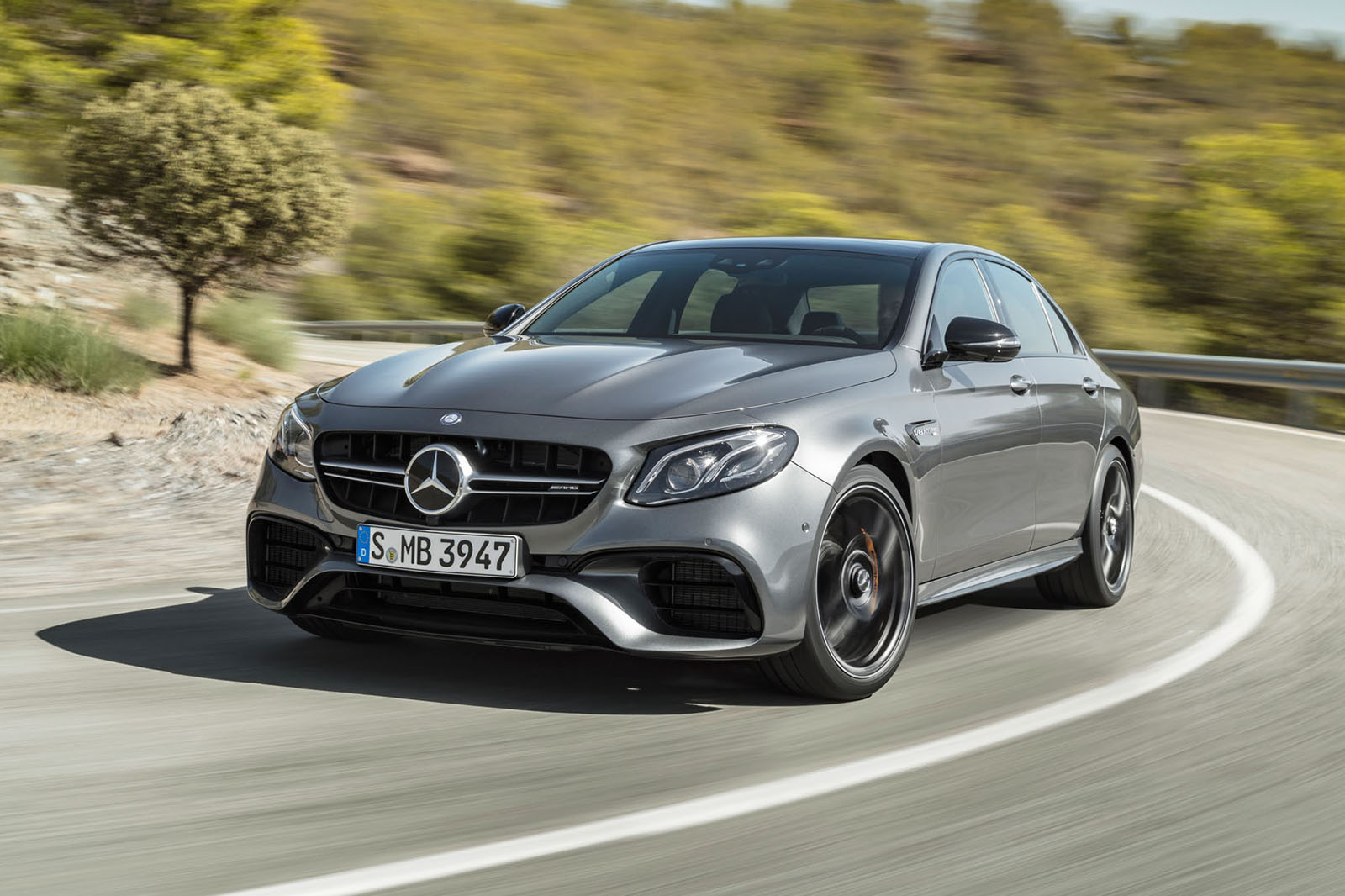 Fitted with AMG’s twin-turbocharged 4.0-litre V8 engine, the new E 63 will continue to be sold in two distinct versions. In standard E 63 4Matic+, it has 563bhp and 552lb ft of torque. The most popular model, however, is expected to be the range- topping E 63 S 4Matic+, which has added turbocharger boost pressure and other power enhancing tweaks, allowing it to produce a stout 603bhp and 626lb ft.

The E 63's new engine, which is mounted on dynamic mounts in the E63 S 4Matic+, replaces the older twin-turbocharged 5.5-litre V8 used in the outgoing second-generation car, providing the standard model with an added 14bhp and 29lb and the S with an extra 26bhp and 37lb ft over its predecessor.

For the first time, AMG has fitted its 4.0-litre V8 with a pair of new twin-scroll turbocharger for use in the E 63, which claimedly will improve induction boosting properties and further enhance throttle response. 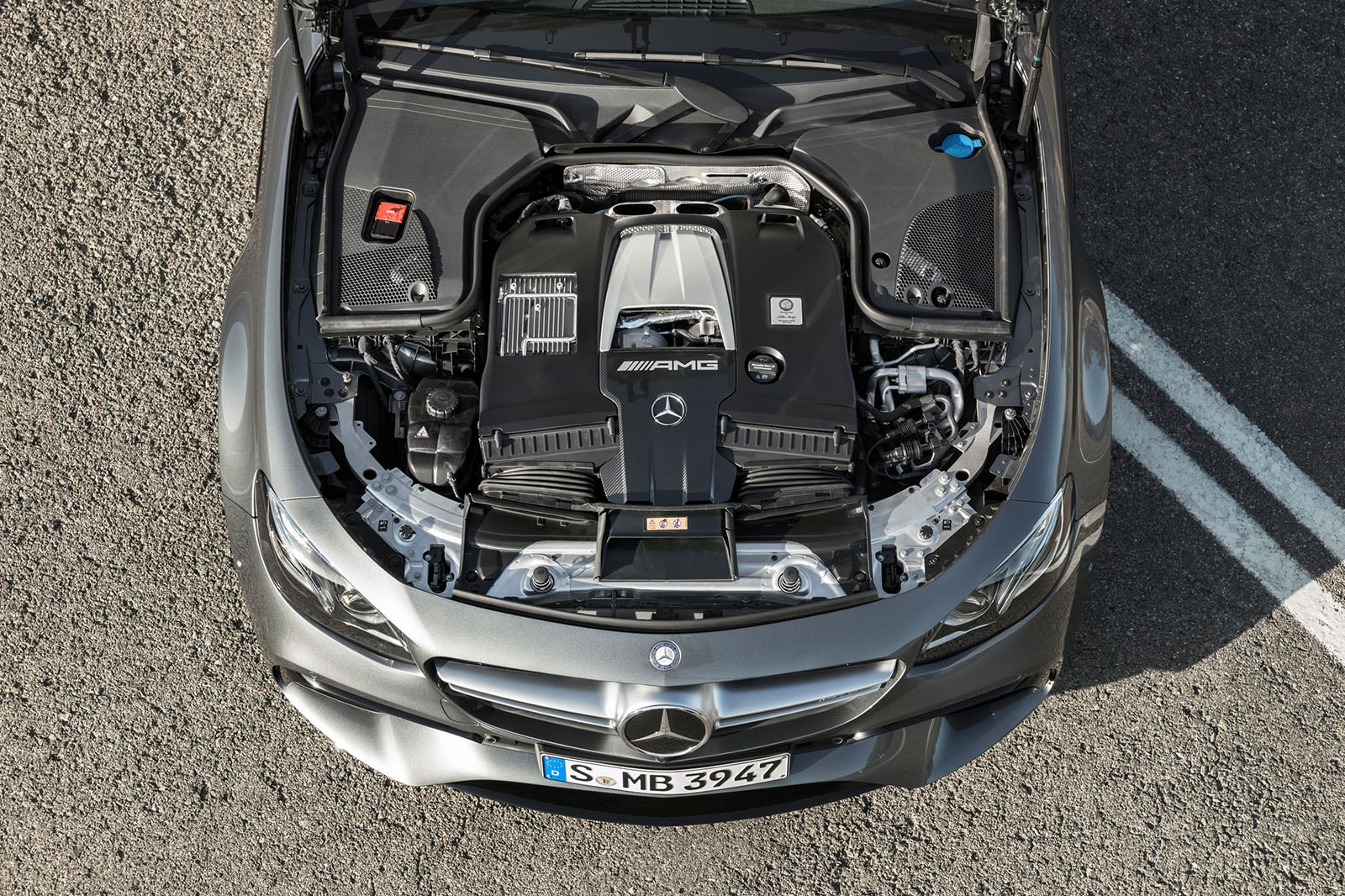 The engine also has AMG Cylinder Management for added fuel savings on part throttle loads. In city driving, four cylinders are deactivated between 1000 and 3250rpm when the engine is switched to comfort mode.

As in other recent AMG models, the driver can choose between four driving modes: Comfort, Sport, Sport Plus and Individual, via a Dynamic Select button on the centre console. In Comfort mode, a coast function decouples the engine from the gearbox on extended periods of trailing throttle at speeds between 37-100mph for better fuel efficiency. A fifth driving mode, Race, is also included on the E63 S 4Matic+.

Both models will be available only with AMG's Performance 4Matic+ four-wheel drive system, which offers fully variable distribution of drive between the front and rear wheels for the first time. 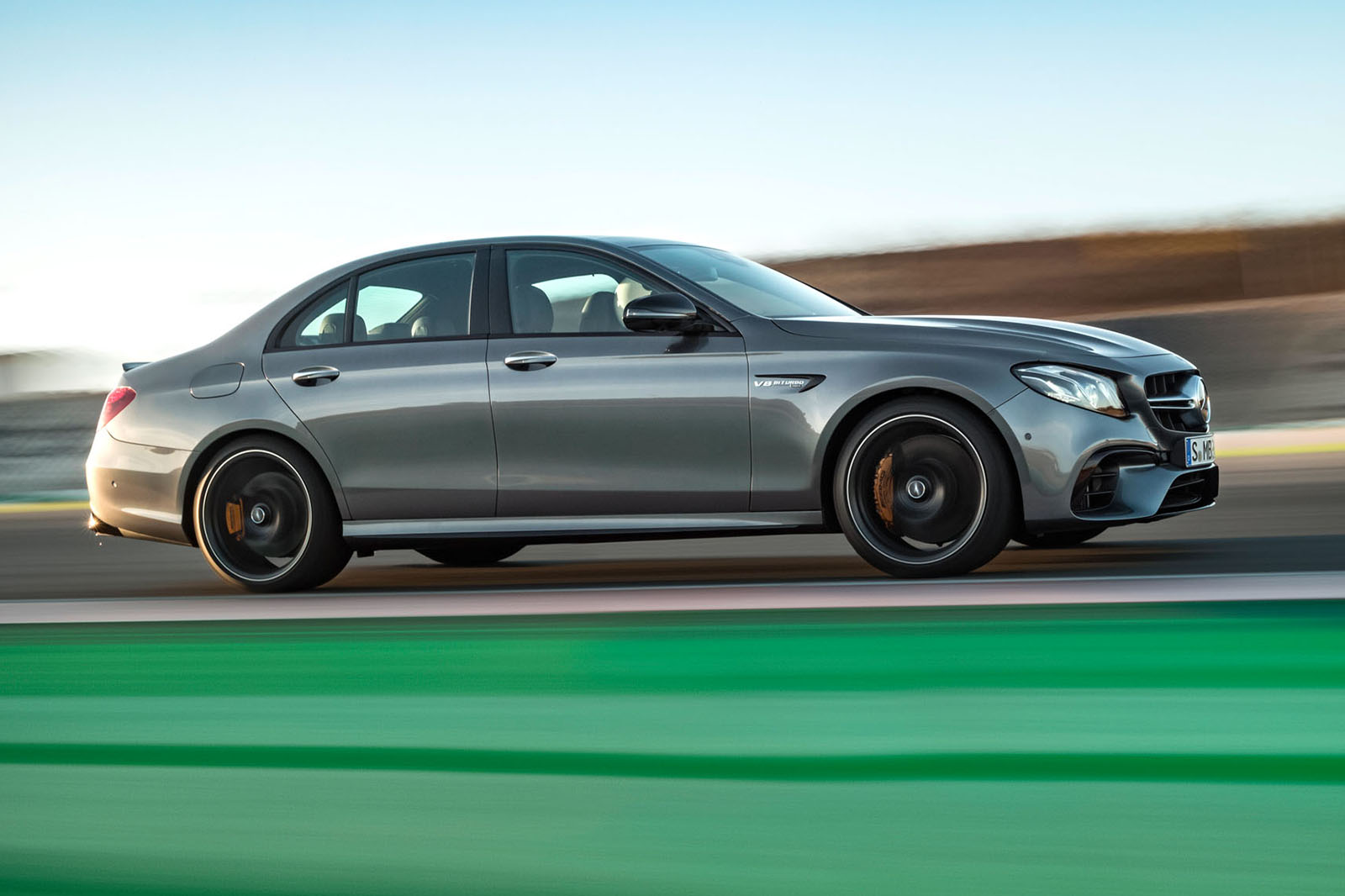 Despite the use of four-wheel drive, AMG says it has ensured the car retains its reputation for promoting oversteer when the conditions allow through the inclusion of a what it calls Drift mode. Activated by the shift paddles, it prompts the four-wheel drive system to deliver drive exclusively to the rear wheels, remaining engaged until the driver deactivates it.

The car's suspension is a specially tuned version of the sixth- generation Mercedes-Benz E-Class’s Air Body Control system, linked to unique tracks widths and wheel carriers. This gives the E 63 greater camber control than its predecessor. 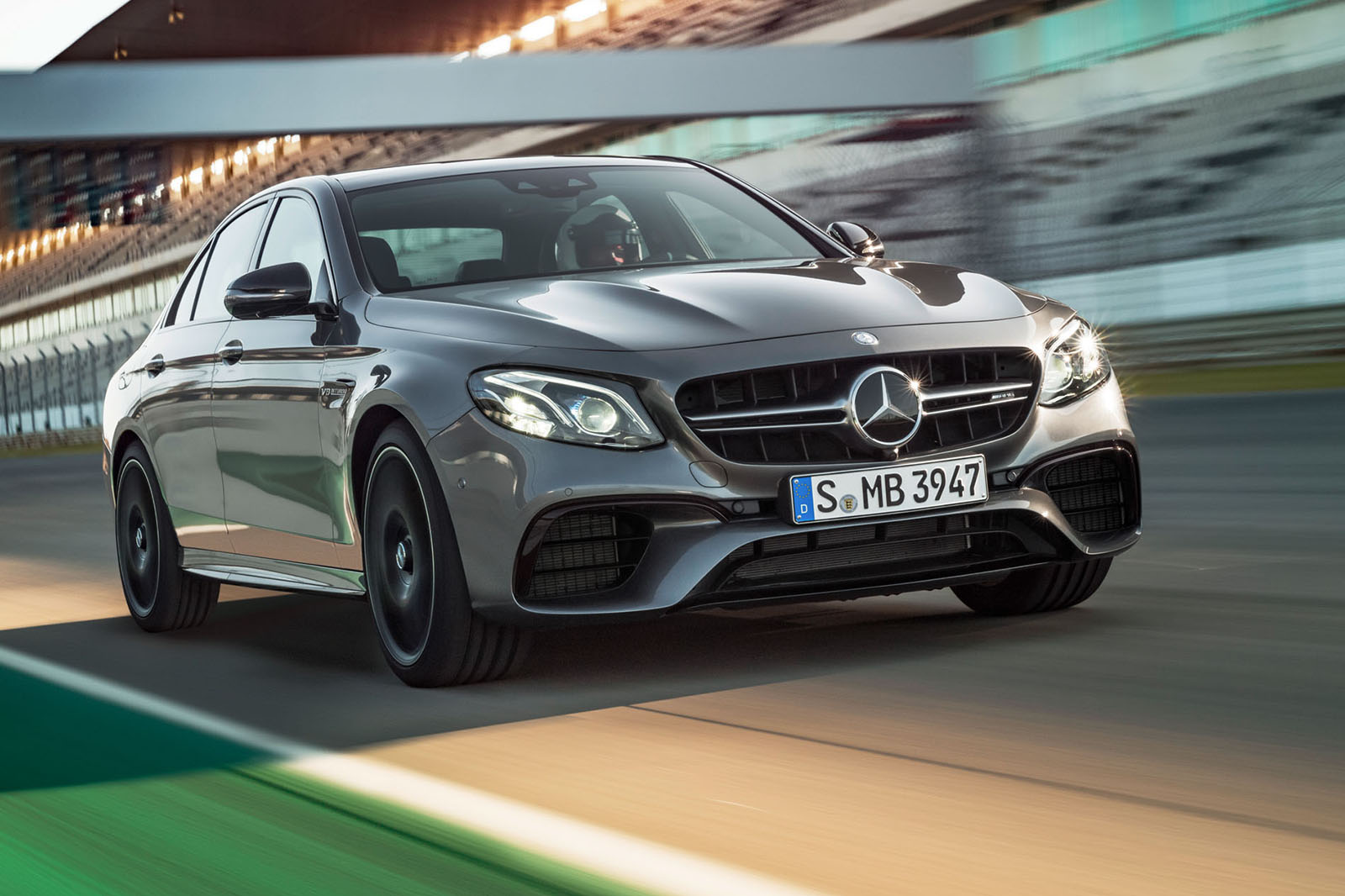 AMG has provided the new E 63 with a comprehensive styling package that not only makes it look sportier but also sets it further apart from regular E-Class models than previous generations of the AMG car.

At the car's front, there's a model-specific front grille, bumper, bonnet and fenders. The whell arches extend 17mm beyond those of the standard E-Class to house the E 63's wider front track and 20in wheels shod with 265/35 front and 295/30 tyres (standard on the E63 S 4Matic+ and optional on the E63 4Matic+).

This guy just pushes the keys

This guy just pushes the keys without knowing what he is writing.

The most powerful series production four door AMG has made? Apart from the S65 obviously.

And he actually wrote that the 'S' adds a leather steering wheel to the standard model...

Gven the problems with our GLC43...

...(clonking steering, crabbing, and increased tyre wear as a result - and of course MB's burying of head in the sand over what they now refer to as a "characteristic" on the subject of which new customers will have to sign a waiver when purchasing) I'm relieved I went for a RS6.
thomasammy749 10 February 2017

Mʏ ʟᴀsᴛ ᴘᴀʏ ᴄʜᴇᴄᴋ ᴡᴀs $8500 ᴡᴏʀᴋɪɴɢ 10 ʜᴏᴜʀs ᴀ ᴡᴇᴇᴋ ᴏɴʟɪɴᴇ. My younger brother friend has been averaging 12k for months now and he works about 22 hours a week. I cant believe how easy it was once I tried it out.

The stuff they get away with!