BACK TO ALL NEWS
Currently reading: Porsche 911 Turbo S Exclusive Series revealed at Goodwood Festival of Speed
UP NEXT
Skoda to launch electric saloons and estates alongside SUVs

Most powerful Turbo S will be built in just 500 units worldwide; it marks the start of the Porsche Exclusive Manufaktur arm
Open gallery
Close
Share story

Porsche has launched its most powerful 911 Turbo S model yet, the Exclusive Series, to mark the opening of a new division called Porsche Exclusive Manufaktur. The model made its debut at the Goodwood Festival of Speed.

Like McLaren's Special Operations division, the in-house workshop will specialise in producing customised products. Its first car, the Exclusive Series, will be produced in just 500 units worldwide.

The car’s  twin-turbocharged 3.8-litre flat six engine has been boosted with a power kit to deliver 599bhp and 553lb ft of torque. That’s 17bhp more than standard, with the same maximum torque, helping to trim the car’s 0-124mph time to 9.6sec, three-tenths faster than the regular model. The car’s claimed 0-60mph time and top speed remain unchanged at 2.8sec and 205mph respectively. 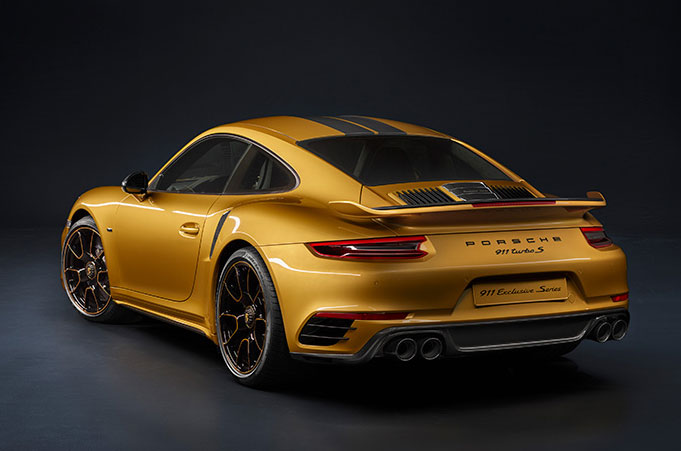 As standard, the Exclusive Series gets black, centre-locking 20in wheels with Golden Yellow Metallic highlights. The calipers of the carbon-ceramic brakes also come in black with gold Porsche logos.

The model sits on Porsche’s active sports chassis with Porsche Active Suspension Management (PASM), and it gets the Sport Chrono package as standard. These work with rear-axle steering and Porsche Dynamic Chassis Control (PDCC), both of which are standard on all 911 Turbo S models.

Buyers can choose from an extended palette of exterior colours that includes a bespoke Golden Yellow Metallic and carbonfibre trim finish. The car gets the Turbo S’s Turbo Aerokit as standard, adding a large spoiler at the back.

Inside, passengers sit on 18-way adjustable sports seats that are wrapped in perforated leather wearing two stripes in Golden Yellow. Seams and Turbo S lettering are also stitched into the headrests, while an Alcantara rooflining gets a Golden Yellow double stripe. 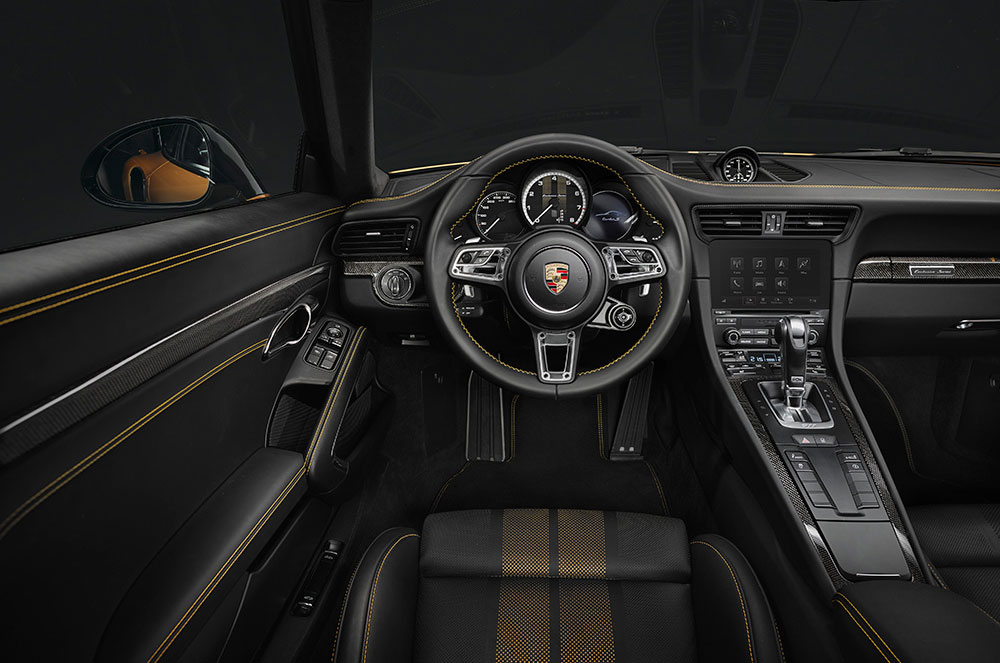 Each car is numbered with a plate fitted on the passenger's side. In addition, the car’s carbonfibre door sills get illuminated Exclusive Series lettering.

Porsche Design has released a customised chronograph watch to go with the new model, echoing the colour scheme and design of the Exclusive Series. It comes as one of several matching accessories buyers can add to their purchase.

Porsche is yet to decide how many examples of the Exclusive Series will come to the UK and what starting prices will be. But the car maker has suggested that global prices will start at around $257,500, which equates to £202,266 at current exchange rates. That’s a £54,726 premium on the regular Turbo S.

I have never seen a Gold coloured Porsche,is that of the VW Palette......?,where ever it is from it is awful,does the Turbo no favours.
MarkII 10 June 2017

This article is specifically about a Porsche and yes, I know, Porsche is now part of VW but the article is about a petrol 911 Turbo S so why shouldn't the comments be relevant?
View all comments (8)