BACK TO ALL NEWS
Currently reading: Exclusive: reborn Porsche 935 driven at Goodwood
UP NEXT
Motoring heroes: the most inspiring people in the car industry

There was more than one reason I turned off the stability systems as I sat on the start line of the Goodwood Festival of Speed hillclimb, the first hack in the world to drive the new 690bhp 935.

One was obvious: appalling show-off that I can be, I wanted to leave the line with as much smoke, wheelspin and drama as I possibly could. But what it also meant was that the car would accelerate far more slowly than had I allowed its massive Michelin slicks to bite into the asphalt, which then meant I’d feel less like a shell shot from a field gun.

Even so, when I tugged a lever, hit second gear and the tyres gripped, the acceleration was still sufficient to make me feel giddy all the way to the first corner. It also meant that when I arrived at said corner my rear tyres were bubbling with warmth, while those at the front were stone cold.

Someone far wiser than me once said that at Goodwood more than anywhere else, you drive on the wrong side of the risk-to-reward ratio. The only run anyone will ever remember is the one where you use a carbonfibre supercar to batter your way through eight consecutive rows of straw bales. So I did what I always do here and drove as fast as I possibly could without taking a risk.

And the 935 was mighty. In fact it was epic. I’ve driven plenty up this hill over the years, but few that had me cackling quite so insanely at it blasted over the finish line. I avoided the temptation to spin turn it at the top, parked up and sat silently contemplating what on earth I can bring you by way of driving impressions when the subject of my report was a car I’d driven in anger for less than a single minute.

Well I can tell you this. I understand entirely why a fellow writer suggested all I needed to do was cut and paste my GT2 RS impressions, and I might have feared as much myself before I saddled up. But no: the powertrain might be the same save its exhausts, some gearbox software and traction control re-programming, but with race suspension, race tyres, a gutted interior and a race car dashboard, its feel is completely different.

It is, for instance, quite grumpy at low speeds. First gear engages with a bit of a shudder and as you proceed down to the start, it fidgets and rattles over the bumps. It feels like there is no rubber in its suspension at all and I am sure there is not. Digital data dances in front of you, a pox of buttons has erupted on the sawn-off steering wheel. Everywhere you look there is raw carbonfibre. This is all as it should be.

It’s way quicker than a GT2 RS too, because of the suspension, tyres and downforce, even though the long-tail bodywork, intricate roll cage and other safety features means it’s not actually much lighter. There is no official Nürburgring lap time, but the unofficial one is in the 6min 30sec bracket. Imagine that! Up the top of the hill as the speed rose it provided that feeling of directness and precision that only cars generating significant aerodynamic grip can muster. 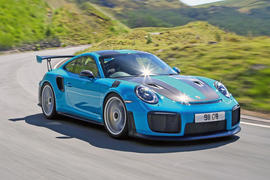 Some people have been quite dismissive of this car, because it can’t be driven on the road and is not homologated for any race series. I’ve heard it be called cynical too and I guess if creating a car your customers want to buy is cynical then that’s true, but you can say the same of a Ford Fiesta.

To me, I love the way it looks and I love the way it drives. I am green with envy at the thought of the 77 people lucky and rich enough to be offered one and be able to buy it. Even at around £750,000, the car was 10 times oversubscribed. I don’t choose to analyse it any further than that. Truth is the 935 afforded me one of my very best minutes of 2019, and that’s good enough for me.