BACK TO ALL NEWS
Currently reading: How Max Chilton and the McMurtry Speirling conquered Goodwood
UP NEXT
Hennessey guns for speed record with 300mph+ Venom F5 Roadster

How Max Chilton and the McMurtry Speirling conquered Goodwood

How does it feel to cover 1.16 miles in 39 seconds? We hear from the man at the wheel
Close

Volkswagen made headlines at the 2019 Goodwood Festival of Speed when its ID R electric racer surged to the top of the 1.16-mile course in 39.9sec - and that record stood for three years until being resoundingly beaten last weekend by Wiltshire-based start-up McMurtry Automotive, whose ludicrous Spéirling fan car shaved 0.82sec off that time.

We spoke to ex-Marussia Formula 1 driver and now McMurtry development driver Max Chilton – who was at the wheel of the warp-speed EV for the record run – to find out exactly how it was done, what it means and what’s coming next.

“It was pretty astonishing. We had pretty much every manufacturer that was competing in the time trial coming up to have an in-depth look at our car, because they just could not believe it. It’s the biggest reaction I’ve ever had to anything in my 21 years of motorsport. It was still going 48 hours after the event - still the number one trending video on YouTube worldwide. People can’t get their heads around it. They’re all convinced it’s fast forwarded. They just don’t believe a car can do what it’s done.

“Everyone’s watched the Festival of Speed multiple times, but to see it speed up like that… They can see it looks visibly different, which is great to be a part of, and it’s wicked that it was me driving it. I’ve been going since I was four years old. My dad was in the hillclimb in 1995 – I remember being there to watch him going up the hill – and I’ve known the Duke and Duchess [of Richmond] all my life, so it was a special moment to break a 23-year record with a British-built, British-engineered car with a British driver that’s always been passionate about Goodwood. It really was the most special day of my motorsport career, and I never thought that would be a hillclimb in Sussex...”

He’s done it again! @maxchilton has just broken the Timed Shootout and his outright record in the McMurtry Spéirling. The VW ID.R has been beaten with a ridiculous time of 39.081 seconds. The Future of Motorsport Power presented by @dhlexpressuk #gw_DHL #FOS #Hillclimb #record pic.twitter.com/5Lr2ODJzrt

How do you get used to this sort of pace?

“The first time I did a full-suck-down, full-torque launch, I thought: ‘That is mad fast.’ But you get used to it, and now a 2.5-3.0sec launch feels useless, so blasé, because anything sub-2.0sec really puts the force on the body. It’s still great fun, and the best thing about it is anyone with no driving experience could do 0-60mph in 1.5sec. You literally go full throttle with full brake, and once you let go of the brake, it doesn’t do any torque steering. You’re there in 1.3sec. It’s brilliant technology.”

Did you have to learn how to drive the Spéirling, specifically?

“A racing driver always has an ability to push a car straight away, but they are not always going to be exactly 100%. This car was a little bit different, and it took me a while to get used to it. It handles very differently if the fans are on or off. If you’ve got no fan system on, the car weighs nearly a tonne and has very little mechanical grip and very little drag - virtually none. They’ve tried to make a very drag-resistant car, because they want it to be efficient. The suck-down is drag-free but bodywork downforce is very draggy.

“When you turn the fan system off, it’s quite a challenge to drive, but once you turn the fan on, it is unbelievable. It’s so backwards, because normally when a car goes quicker, there’s more airflow and more downforce, but with this car it doesn’t matter: 1mph to 200mph, the car’s got the same downforce. 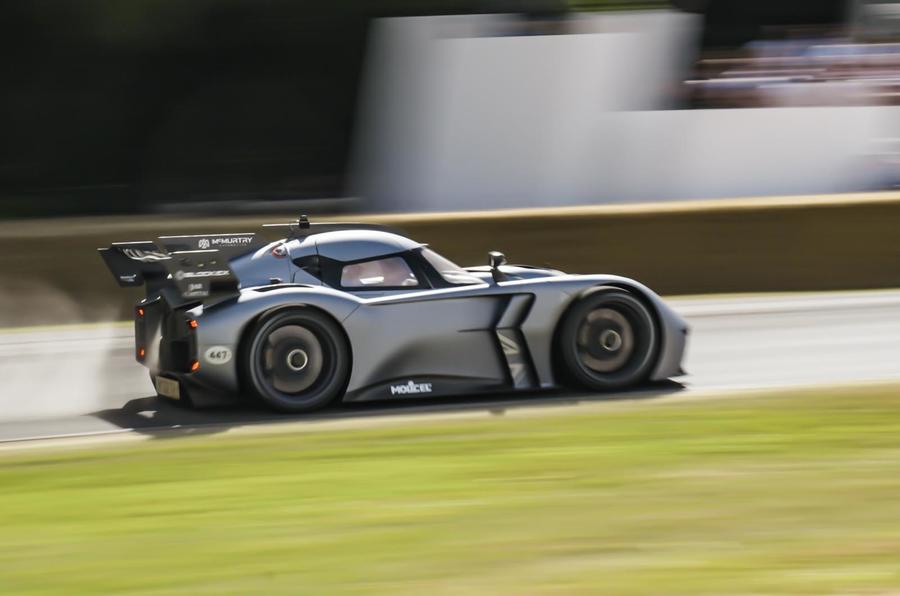 Did you look to any other drivers for advice on the hill?

“I did watch some of their videos and thought: ‘Jeez, I don’t see how we’ll go that quick.’ When you watch the ID R record, you think he was absolutely on it and there’s nothing left, but once I got in the zone and learned how much downforce our car creates, it just came to us. My first run of the week was a 49.0sec, the next was a 45.0sec and on the Friday afternoon I did a 41.0sec, so I thought: ‘We’re not a million miles off now.’

“That’s not even the ultimate. I had a big lift on the last corner in my Sunday afternoon shootout because I turned in a bit early and clipped the hay bale so had to back out. It probably would have been a 38.something… And with the way the times came down over the four days, if we’d been there another day, we would probably have taken another second off it. Plus, we’ve got updates, which could make it a couple of seconds quicker, so the potential is just huge.”

The hillclimb is so narrow and tight. Can you just go full throttle all the way up?

“You can go full throttle because it’s basically got a Range Rover Evoque sat on its roof. The wheels will find it virtually impossible to slip because of the load going through them. And it’s got a very clever traction control system - so between the two, it’s virtually 100% torque and it gives it to you in one big hit. On Silverstone, where I’ve got a bit more room to play, I can get it to slightly move, but it’s pretty well planted.” 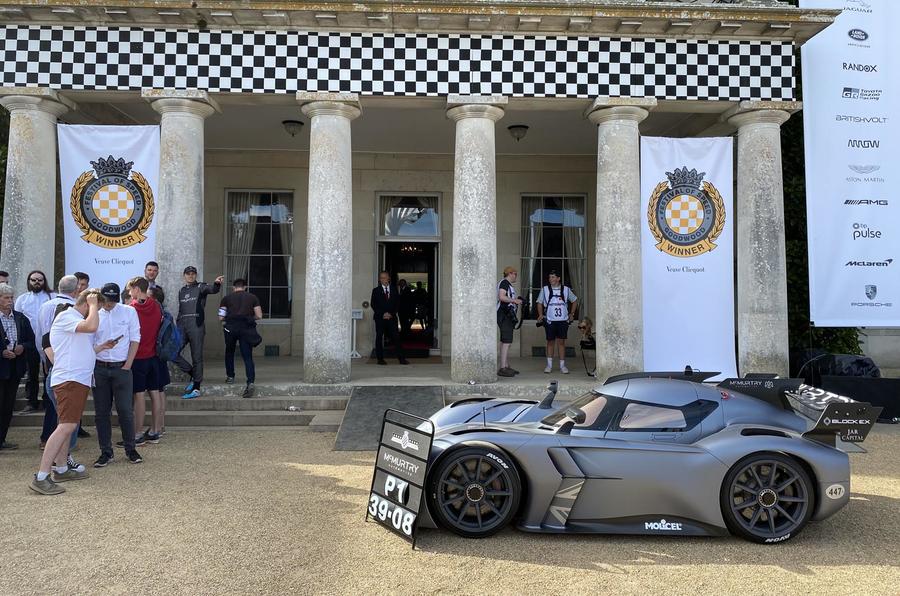 Is the Spéirling a big step forward compared with a Formula 1 car?

“It’s so different. The acceleration from 0-60mph is nearly twice as quick as what I did in my fastest launch in an F1 car. That’s how rapid it is. Plus, it’s 100% torque and there are no gearchanges, so it’s completely linear acceleration to wherever we gear it. At Goodwood, we gear it to 150mph – where I was for four seconds – so we could have gone a lot quicker but we didn’t think we needed it.

“Because we designed it to be a race car, we didn’t have any rules. We could just come up with the most crazy thing. And why it’s gone so mad in the car world is because there will be race engineers and car designers all over the world thinking: ‘Why haven’t we been doing that?’ There’s these companies charging £3-4 million for a hypercar, and we’re going to be 10-15sec quicker than them around a race track like Silverstone.”

What has been your contribution to the development programme?

“The rear wing wouldn’t have been there without me. When we first started testing without the fan system, it was quite tail-happy, because it’s quite a heavy car and it didn’t have any downforce. The biggest area I struggled in was changing direction: the rear wanted to give way. So we put a rear wing on it which gives about 250kg of downforce, which massively helps the balance of the car. When the fan system’s off, it’s a lot more stable.

“Then various updates, interior preferences, just little bits along the way like the mirrors. They originally had cameras, but racing around Silverstone with people on track days, I had moments where the rear-view camera didn’t give me enough visibility and I nearly got hit a couple of times. So we put wing mirrors on and I think it actually makes it look even more like a normal car.” 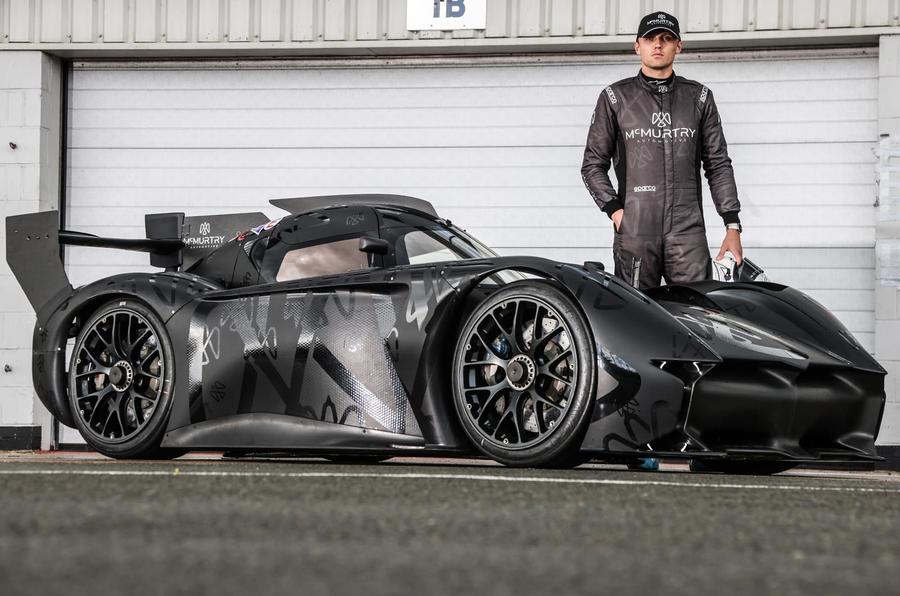 How is McMurtry different from a race team?

“It’s a little bit more relaxed. Not any less serious, because we’re still designing something with huge global potential, but we haven’t got the competing aspect. Weirdly, though, on Saturday night I probably felt more stressed than I’ve ever felt in my motorsport career because I’d seen how quick the car could be on the circuit on Thursday and Friday but not at its full potential. It’s a bit of a different thing, hillclimbing, a bit like getting a race driver to be a rally driver: there’s no warm-up. Off you go.”

What’s the scariest bit of that hill?

“The car is best at the slower- to mid-speed corners, so the faster you go, the more you want downforce, and the last corner is a bit bumpy and taken at about 120mph, so that’s where I could do with more downforce.”

“I saw comments saying there’s more time left in it because I wasn’t using all the road, and that’s frustrating because they don’t understand how the car works. Goodwood has a crest in the road and our car creates a seal on the floor, which if you break you reduce your downforce heavily. So if I cut corners like a normal car, I’d lose time. The best way to drive the car is in the middle of the road, like a Scalextric car."