BACK TO ALL NEWS
Currently reading: Volkswagen Arteon design previewed ahead of Geneva
UP NEXT
New Ford Puma ST lands with 197bhp

The Volkswagen Arteon will make its public debut at the Geneva motor show before going on sale this summer.

The four-door fastback model will sit above the Passat in Volkswagen’s line-up and be a rival to the BMW 4 Series Gran Coupé.

Volkswagen has released two preview images in the run up to the reveal, showing the new design of the car’s LED headlights and taillights.

It’s essentially a successor to the Volkswagen Passat CC and the newer CC, but the new car gets broader shoulders and more distinctive design features, such as headlights that feed directly into the grille. Inside, many parts are shared with the Passat, but the Arteon gets extra space and is optionally available with VW's Active Info Display digital instrument display.

Autocar drove two prototypes of the car last year, both of which confirmed Volkswagen's claims of generous interior space and a large boot.

Both cars had front-wheel drive, although four-wheel drive will be available as an option. After the Arteon's launch, Volkswagen's familiar range of turbocharged four-cylinder petrol and diesel engines will be added to its range, with the most potent European petrol unit producing 276bhp.

The Arteon will get also get a new seven-speed DSG dual-clutch automatic gearbox and introduce new driver assist features to the Volkswagen range.

The new car is expected to cost from around £28,000. More information will be released when it makes its public debut next month. 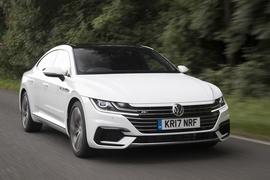