BACK TO ALL NEWS
Currently reading: New Mitsubishi L200 unveiled in Geneva
UP NEXT
Good sports: New BMW M2 CS vs Porsche and Alpine rivals

An all-new Mitsubishi L200 pick-up has been revealed at the Geneva motor show.

The current model has been on sale for almost a decade. To date, 1.3 million units have been sold.

The new model gets a host of upgrades aimed at making it more refined and safer, without softening the car's hard-won reputation for toughness.

The main improvement is an all-new 2.4-litre diesel engine, which is available in two states of tune. The entry-level engine has 151bhp and 280lb ft of torque, while the higher-output version has 178bhp and 317lb ft. There is an all-new six-speed manual gearbox, as well as a paddle-shift automatic option. Importantly, given that the L200 will almost entirely be bought as a company vehicle, CO2 has dropped from 199g/km to 169g/km for the cleanest models.

The new engine, beefed-up body mountings and revised suspension settings are claimed to give significant improvements in passenger comfort by reducing noise and vibrations passed into the cabin. The steering has been speeded up, too, in an effort to sharpen up the driving experience.

Externally, the new L200 is closely related to the model it replaces, but with redesigned front and rear ends. Mitsubishi is also claiming the cabin is higher in quality, more comfortable and more spacious than that of the outgoing car.

Although Mitsubishi has made significant commitments to hybrid and plug-in technologies, most recently with a hybrid pick-up at the 2013 Geneva motor show, there is no confirmation that a low-emissions L200 will form part of the line-up. 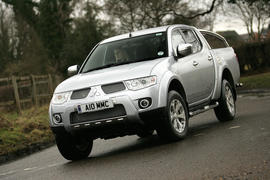 The Mitsubishi L200 pick-up offers plenty of creature comforts in high-spec models. But at its heart, it’s still a workhorse

17 February 2015
I hope the double-cab version loses that "saggy bum" that looks like it's been rear-ended!

More of a facelift