BACK TO ALL NEWS
Currently reading: New Audi RS5 Coupé to cost from £62,900
UP NEXT
Mystery Ferrari LaFerrari prototype spotted with new bodywork

The new Audi RS5 Coupé costs from £62,900, with first deliveries expected for the summer.

The second-generation Audi RS5 Coupé was first unveiled at the Geneva motor show, and has a new twin-turbocharged 2.9-litre V6 petrol engine developing 444bhp (the same as the 4.2-litre V8 in its predecessor). The new performance coupé also gets a new badge, and will be sold under the Audi Sport banner. The new RS5 emits a claimed 197g/km CO2 - a 17% reduction, says Audi - and achieves fuel economy of 32.5mpg combined.

This RS5 has been engineered anew from the ground up. Together with the new engine, the RS5 Coupé also adopts a new platform that sees it grow in size over the seven-year-old model it replaces. Further developments include a new chassis featuring a five link front and rear suspension coupled to Audi Sport’s Dynamic Ride Control system offering variable damping control.

Distinguishing the RS5 Coupe from other recently introduced second-generation A5 Coupe models are a series of traditional RS exterior styling cues. They include a wider single frame grille featuring a high gloss black honeycomb insert, a new front bumper sporting larger air ducts and an intricate splitter element and headlamps with tinted graphics for the standard LED projectors.

Further back, the front fenders have been widened by 15mm and feature so-called quattro blisters together with additional vertical air ducts along the outer edges of the headlamps. The exterior mirrors get a carbon fibre optic and the side sills have been widened with high gloss black elements to reflect the added performance potential of Audi Sport's latest two-door performance car.

At the rear, the RS5 Coupé receives wider rear fenders extending out some 15mm more than on the standard A5 with more pronounced quattro blisters, a subtle boot deck lid spoiler, a uniquely styled bumper housing a prominent diffuser in high gloss black and two signature oval tailpipes.

The latest RS model rides on standard 19-inch wheels, with 20-inch wheels offered as an option. Two additional styling packages in either high gloss black or matt aluminium are also available. As part of a weight saving initiative, Audi Sport also offers the new RS5 Coupé with a carbon fibre roof, which is claimed to contribute to a 60kg reduction in kerb weight over the old RS5 Coupé despite a 74mm increase in overall length for the new model.

The twin-turbocharged 2.9-litre V6 used by the new RS5 Coupe was developed in an engineering cooperation between Audi and its Volkswagen Group sister company, Porsche. The 90-degree unit is already employed in the second-generation Porsche Panamera S, where it delivers 434bhp and 405lb ft of torque. With unspecified changes, it gains 10bhp and 37lb ft, producing 444bhp and 442lb ft of torque between 1900 and 5000rpm in the new Audi Sport model.

By comparison, the naturally aspirated 4.2-litre V8 multi-point injected engine used by the old RS5 Coupe delivered the same 444bhp and 317lb ft at a much higher 4000rpm. 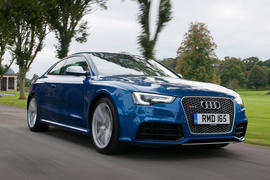 The reduction in kerb weight helps to provide the new 1655kg 2017-model-year RS5 Coupe with a power-to-weight ratio of 268bhp per tonne, or some 9bhp per tonne more than the old 1715kg first-generation RS5 Coupe, on sale in the UK since 2010.

In a further change to the new Audi’s driveline, the latest RS5 Coupe forgoes the seven-speed dual clutch gearbox of its predecessor for an eight-speed torque converter equipped automatic from German specialist, ZF. It is allied to the latest version of Audi’s quattro four-wheel drive system that apportions drive in a rear wheel biased 40:60 split and also comes with an optional sport differential offering a torque vectoring effect for the rear wheels.

Audi claims a 0-62mph time of 3.9sec, which is 0.6sec faster than the old RS5. Top speed is nominally limited to 155mph, though buyers can extend with to 174mph by optioning the new Audi with a so-called dynamic package.

See the older RS5 take on BMW's M3 in the video below.

I would take the old

4 May 2017
I would take the old naturally aspirated V8 over a turbo V6 all day long. In the real world beyond the confines of the unrepresentative official test, there's not going to be much difference in economy. And anyway, if you want economy, buy something else, so how about manufacturers quit with the pointless downsizing and ruining anything worth buying. 4 cylinder Boxster anyone? Me neither.