BACK TO ALL NEWS
Currently reading: Land Rover Discovery Project Hero to help save lives using drone tech
UP NEXT
Renault Scenic returns as radical EV with hydrogen range extender

The new Land Rover Discovery has been put to work with the Austrian Red Cross, with a bespoke version of the car - dubbed 'Project Hero' - using drone technology for search and rescue operations.

The new car, created by Jaguar Land Rover's Special Vehicle Operations division, is on display at the Geneva motor show and is based on the 3.0-litre TD6-engined Discovery. It will be trialled by emergency response teams with the Red Cross, and is aimed at speeding up response times to disasters.

A roof-mounted drone is the Discovery's most obvious new addition. The drone is able to land on the car even when it is in motion, thanks to its self-centering and magnetic retention technology - something which Jaguar Land Rover claims is a world first. When airborne, the drone can feed live footage from its camera to emergency response teams, effectively making traditional maps redundant. 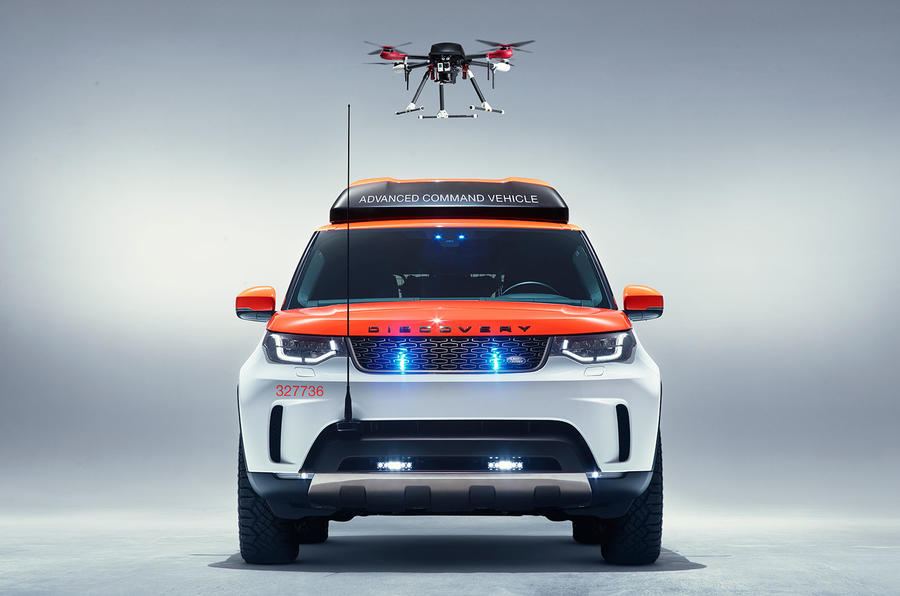 Among the other modifications made to this Discovery is a heavy duty sliding floor in the rear, which doubles as a work surface or can be used to protect loads. An extra panel behind the rear seats offers mounting points for equipment, while new power supply points can accept plugs from different countries. Multiple frequency radio equipment also features.

The Project Hero car will be based at the Austrian Red Cross training centre in the mountainous Erzberg region and also in Vienna for 12 months of testing from June. It will be used in simulations to develop new approaches to disaster relief, and will also be used when the Red Cross responds to natural disasters.

Head of SVO John Edwards said: "Land Rover and the team of engineers and designers at SVO are proud to support the incredible humanitarian work of the IFRC [International Federation of Red Cross and Red Crescent Societies] and its members. Project Hero is the optimum combination of enhanced capability and innovative technology. We hope to help the Red Cross save lives in emergency situations.”