BACK TO ALL NEWS
Currently reading: Aston Martin DB11 video analysis: full tech details, prices and exclusive pics
UP NEXT
Hidden gems: A peak behind the scenes at Beaulieu

The new Aston Martin DB11, unveiled at the Geneva motor show, is hailed by its maker as “the most powerful, efficient and dynamically gifted DB model” in the firm’s 103-year history.

Perhaps the stand-out feature in this most significant of new Astons is located under the one-piece clamshell bonnet. Designed and built in-house by a team led by chief powertrain engineer Brian Fitzsimons, the new twin-turbocharged 5204cc V12 is the most powerful unit yet fitted to a DB road car.

Its 600bhp and 516lb ft outputs are sufficient to accelerate the DB11 from zero to 62mph in 3.9sec and on to a top speed of 200mph. It’s also the first series-production Aston Martin to use a twin-turbo unit. The DB11 doesn’t have a synthesised system to augment the engine noise. 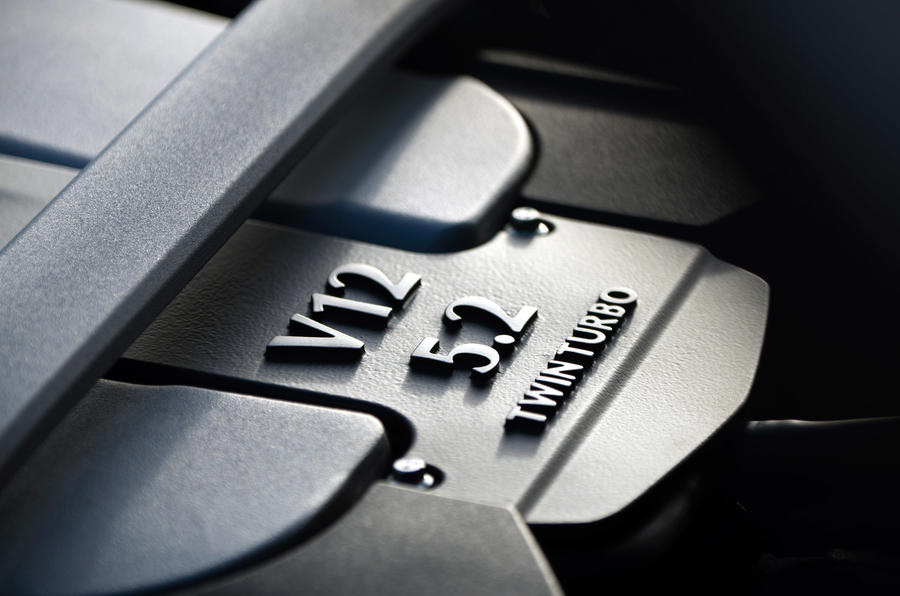 The new engine sends its power to the DB11’s rear axle via a ZF eight-speed paddle-shift torque-converter automatic gearbox. The car features a mechanical limited-slip differential with active torque vectoring, the latter a being first for Aston Martin.

Aston hasn’t revealed official figures, but it is targeting a 20% improvement in fuel efficiency and CO2 emissions over the Aston Martin DB9. That should equate to combined economy of about 24mpg and CO2 emissions of roughly 270g/km. Key to that dramatic improvement is a host of technology including variable valve timing, stop-start and intelligent bank activation, which shuts down six cylinders during periods of light throttle usage.

Aston set its engineering team the target of creating a body structure that is lighter, stronger and more space-efficient than the one that underpins the DB11’s predecessor, the DB9. Using a mix of new bonded aluminium pressings, extrusions and castings, the structure “sets new standards for mass versus stiffness”. 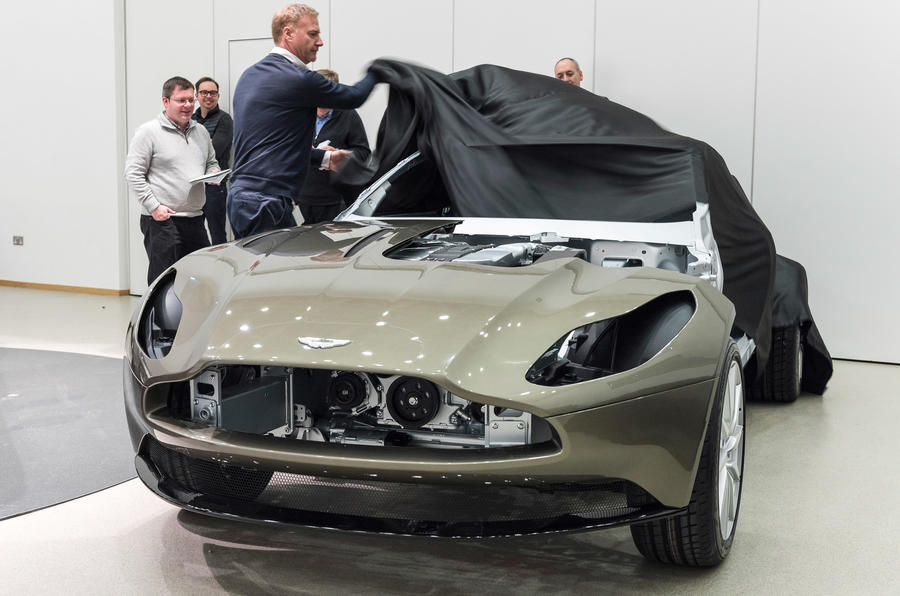 The new DB11 is longer, wider and lower than the DB9, at 4739mm long, 2060mm wide and 1279mm tall. Additionally, the wheelbase is 65mm longer, with Aston emphasising the car’s capabilities as a true 2+2 grand tourer. Compared with the DB9, the front and rear track widths have increased by 75mm and 43mm respectively, and overall width has been extended by 28mm. The front overhang has been reduced by 16mm and the rear overhang increased by 11mm, with an overall gain in length of 50mm.

By making the wheelbase 65mm longer than that of the DB9, Aston has been able to mount the V12 further back in the chassis to improve weight distribution to 51% front and 49% rear. The body panels are made from a mix of pressed aluminium (for the clamshell bonnet, roof and doors), composite material (the rear haunches, front wings and rear decklid assembly) and injection-moulded plastic (the front and rear bumpers, sills, front splitter and rear diffuser).

The new car’s chassis, suspension, steering and electronics have been completely reworked under the watch of ex-Lotus handling guru Matt Becker, now Aston’s chief of vehicle attribute engineering. Aston’s target was to give the DB11 a broad range of capabilities.

Using a steering wheel-mounted button, the driver can select from three dynamic modes — GT, Sport and Sport Plus — which progressively intensify the responses of the engine, transmission, electric power steering and torque vectoring by braking system. A separate button also increases the firmness of the Bilstein adaptive dampers.

The DB11 rides on 20in tyres and wheels as standard. Its Bridgestone tyres have a bespoke tread pattern, construction and compound. Electric power-assisted steering has been incorporated to offer greater scope for tuning and improvements in fuel efficiency. 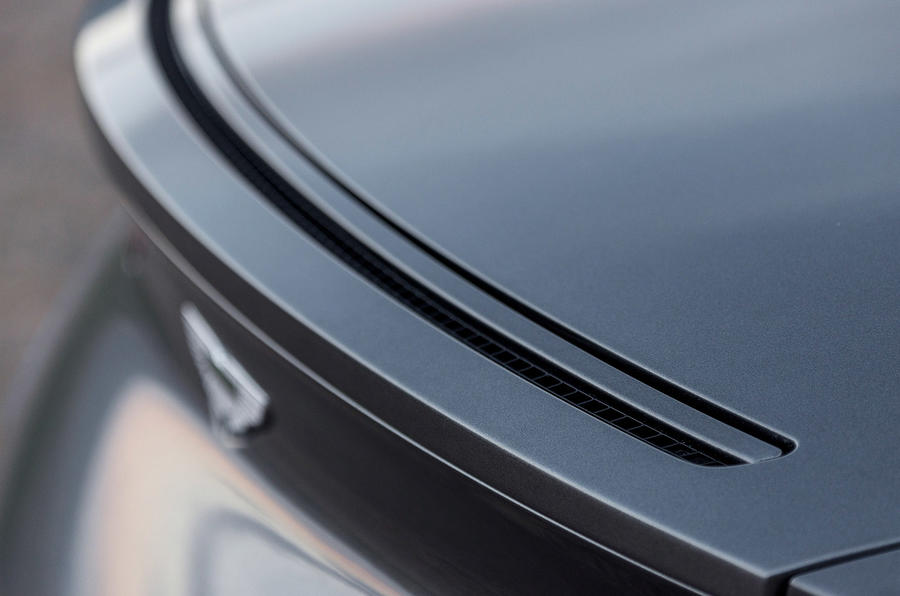 The second feature, which Aston calls ‘AeroBlade’, uses ducted high-speed airflow to act as a virtual spoiler and enhance rear stability. Intake slots incorporated in the base of the car’s C-pillars are fed with high-speed air, which then passes within the bodywork through specially contoured ducting before venting via slots in the rear deck. This high-pressure jet of disrupted air reduces aerodynamic lift, obviating the need for an upswept ‘flip’ in the tail to be designed into the car’s rear.

At higher speeds, a small active spoiler automatically deploys from the rear deck, increasing the effectiveness of the AeroBlade with a negligible increase in drag.

Although Aston Martin’s new design language was previewed on the DB10, which was created for the Bond film Spectre last year, the DB11 marks the first time that it has appeared on a full production model. 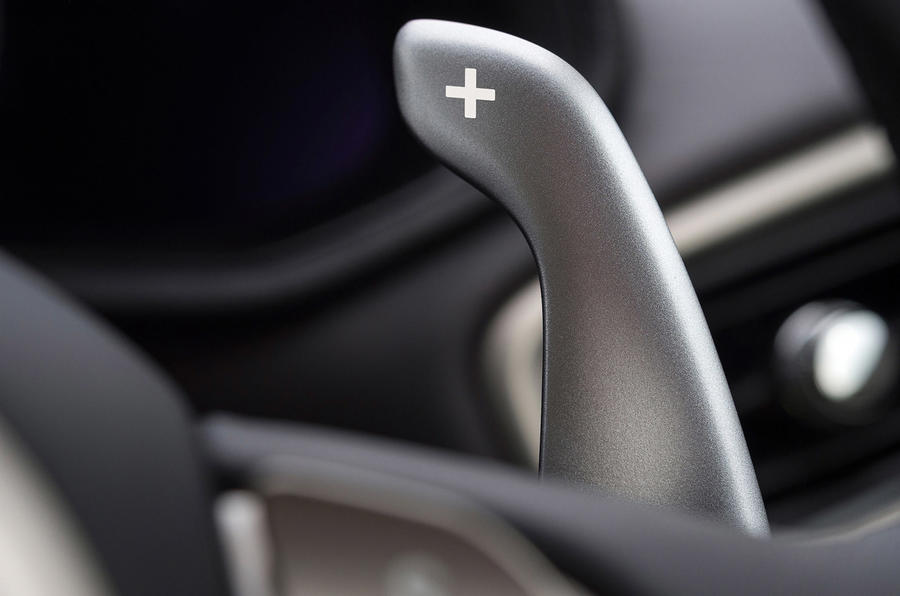 The all-LED headlights and tail-lights are another defining element of the DB11’s design. They incorporate daytime running lights and low-speed cornering lights for the first time on an Aston Martin.

A roof strake that flows in an unbroken arc from the A-pillar to the C-pillar is another design signature, and the side strake on the car’s flanks, while harking back to past Aston Martins, has been reimagined and now forms part of the Curlicue air vent.

The cabin is a blend of recognisable Aston Martin design, such as the centre console that flows from the dashboard to the transmission tunnel and the familiar gearchange buttons, and new technology, including some sourced from Daimler. A new instrument cluster features a full-colour 12.0in TFT LCD screen, and a second, centrally mounted 8.0in TFT screen is dedicated to infotainment. Operation is via a rotary control, and an optional touchpad offers character recognition, multi-touch and gesture support.

The DB11 offers more occupant space and comfort than the outgoing DB9. Redesigned A-pillar structures and a reduction in the height and width of the sill sections mean the door apertures are larger, making it easier to get into and out of the car. Front seat occupants benefit from a 10mm increase in head room and a greater range of seat movement. 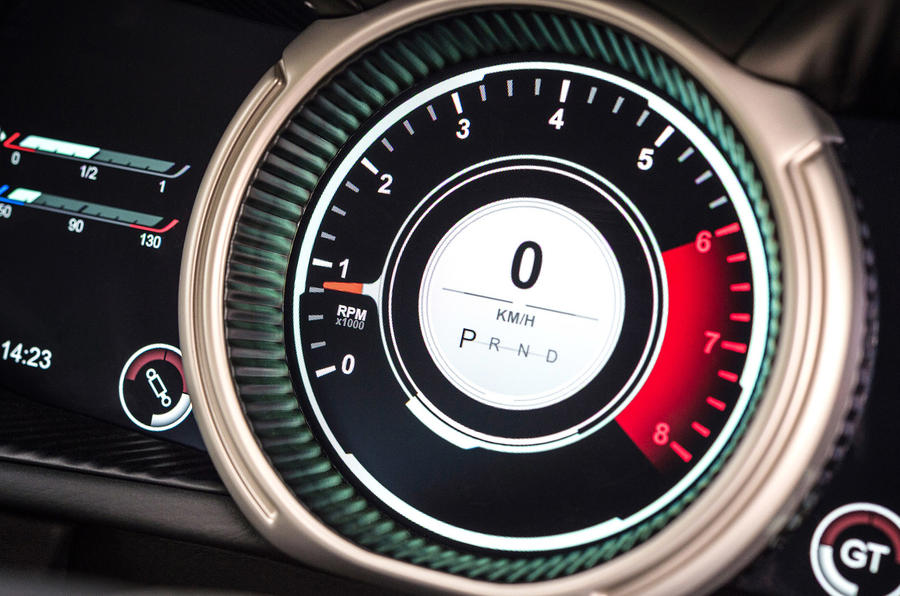 Other features new to the DB11 include keyless entry/ keyless start, parking control including parallel and bay park assistance, a 360deg bird’s-eye camera and an electrically powered steering column with an ‘up and away’ function for easier ingress and egress.

Speaking at the Geneva motor show, Aston Martin officials said they already had more than 1000 orders for the new car, over half of which have come from people who have only seen leaked images of the car online. Palmer is understood to be relieved to finally be showing the car in Geneva. He joined Aston Martin 18 months ago from Nissan, and admitted that launched the DB11 was a risk.

I think it will date

I think it will date relatively quickly.
SirSidneyRuffdiamond 2 March 2016

Pretty special, but with certain reservations.

Pretty special generally. Gripes? The shape of the central instrument binnacle and side air vents are ugly and not in keeping with the rest of the DB11's sweeping lines. I'd change them without a second thought. And not convinced about the rear and from the rear pillar backwards. Otherwise, tip top.
underdog 2 March 2016

In comparison to the relatively understated and classic interior of the DB 9, whoever designed the interior on this car, clearly went to town with the knobs, twiddles, bling and general frippery. As a result to me, it loses something and would probably annoy me, but then again, I've always thought that Porsche have always designed the best sports car interiors which for fans of Clarkson probably marks me as a fan of lazy designers.
underdog 2 March 2016

In comparison to the relatively understated and classic interior of the DB 9, whoever designed the interior on this car, clearly went to town with the knobs, twiddles, bling and general frippery. As a result to me, it loses something and would probably annoy me, but then again, I've always thought that Porsche have always designed the best sports car interiors which for fans of Clarkson probably marks me as a fan of lazy designers.
SirSidneyRuffdiamond 2 March 2016

Each to their own. I have

Each to their own. I have reservations myself about the interior, viz the odd-shaped central instrument binnacle and side air vents. Otherwise fine.
View all comments (28)