Land Rover and toy maker Lego have teamed up to produce a 2573-piece scale model of the new Defender, unveiling it alongside the full-size car at the Frankfurt motor show.

Described as "an automotive icon you can build at home", the detailed Technic kit is based on the new short-wheelbase 90 variant of Land Rover's revived 4x4, and will go on sale on 1 October.

The kit, however, is equipped with a number of features that are not standard fitment on the new Defender. A working winch, not shown at the full-sized car's launch, is fitted to the lower front bumper, while a chunky roof rack and side-mounted ladder hint at the toy's off-road capability. 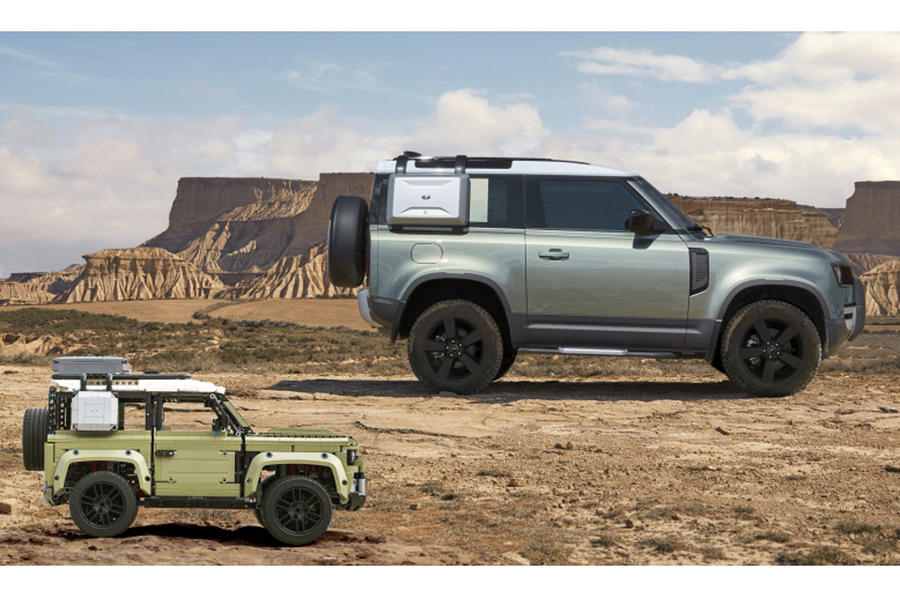 Unlike Land Rover's car, which will only be sold with an automatic gearbox, Lego has equipped its Defender with its 'most sophisticated' four-speed sequential unit yet.

Niels Henrik Horsted, marketing director at the Danish toy firm, said: "With every Lego element, children can build anything they can imagine. I’m very excited about this new model – a truly impressive job done by our Lego Group designers.

"Together with Land Rover, we’ve blended elements, design and innovative engineering into a set that shows the boundless creativity of Lego play, and that with Lego Technic you can build for real.”

While the real Defender is available in a comprehensive range of paint schemes, the model is finished in an olive green. It measures 420mm long, 220mm high and 200mm wide.

Pricing is yet to be officially confirmed by Lego, although reports suggest it will be available from £159 in the UK.

Ahead of its launch, the new Defender underwent more than 750,000 miles of testing in some of "the most inhospitable environments" in the world. This involved hot weather testing in Africa and North America, cold-weather testing at -40deg C, altitude testing at up to 13,000 feet and performance running at the Nurburgring.

It is not yet known whether the pre-launch test programme Lego has conducted on the Technic Defender has been as extensive.

The Defender is the latest motoring icon to be rendered in Lego form, and joins the Volkswagen Beetle and Type 2, original Mini, Aston Martin DB5 and Routemaster bus in the Danish firm's motoring-themed Technic line-up.

Tought this was adult

It gives an insight on how the new Defender will look, so not an unnecessary article. Also, lego can be enjoyed by people of all ages.

Clearly you are blissfull in your complete ignorance of the adult hobby market size, both in the UK and around the world. Notwithstanding that, Lego are a hugely successfull and profitable company who could only offer this particular model with the full cooperation of JLR at an early stage. Do you believe that it is in either companys best interest to offer this model, if there was  not going to be huge interest and takeup on it?.

Only unnecessary, stupid thing is your original post. Thought not tought, Totally not toally, Unnecessary not unecessary and Article, not artical...make that five stupid things.

.... we are talking about this magazine decending to new depths.

If you mean Lego should not

Abstract Lego bricks encourage creativity because you can use your imagination and build various things with them.

Object-specific Lego bricks are for me pointless as no creativity is involved. It is no more enjoyable than putting together IKEA furniture.

With all the extra stuff

With all the extra stuff stuck on it, and the usual compromises for Lego designs, this might just as easily be a portrayal of the old Defender model, as the new one.