Kia Sportage prices have been announced, ahead of the model's 5 February on-sale date.

Kia's Nissan Qashqai rival will cost from £17,995 for the entry-level petrol 1.6 GDI Sportage, with a six-speed manual gearbox. A special, range-topping First Edition Sportage has also been announced, priced at £31,645, with the top-spec 182bhp, 2.0-litre CRDi engine and six-speed automatic gearbox.

Standard equipment across the range includes a leather-trimmed steering wheel, air-con, DAB radio, Bluetooth connectivity, Hill-start assist and cruise control. All models from 2 spec upwards will have a 7in or 8in touchscreen with sat-nav, while higher-spec cars will gain added tech, such as Autonomous Emergency Braking, Lane Keep Assist and other safety and driver assistance technologies.

GT-Line spec is new to the Sportage, and is marked out by 19in alloys, Kia GT's signature quad front foglights, dual exhausts and metallic exterior trim. Where a DCT gearbox has been chosen, paddle shifters will also feature, as well as various interior trim upgrades.

A new T-GDi turbocharged petrol engine is also claimed to deliver more than 37mpg and 177g/km and 175g/km in manual and DCT guises.

Kia claims the latest Sportage engines have improved emissions and economy; the most popular 1.7-litre CRDi engine improves the 52.3mpg and 143g/km CO2 of the outgoing unit by more than 7mpg and emissions by 16g/km. Kia also claims the 2.0-litre CRDI engine in 134bhp and 182bhp automatic formats have emissions reduced by 29g/km and 23g/km respectively. The torque of these engines is also improved, as Kia claims the less-powerful 2.0-litre diesel now produces 275lb ft compared with the previous model's 236lb ft, and the 182bhp engine increases to from 282lb ft to 295lb ft.

The fourth-generation Kia Sportage was first revealed at the Frankfurt motor show. It gets totally new styling for the sides and rear, although the biggest changes are at the front. The headlights are no longer integrated into the grille, as they were on the third-generation Sportage, but now sit higher up on the side of the bonnet. This leaves the now familiar Kia nose, which features on the majority of the company’s range, with a stand-alone grille.

It also gets a larger lower grille, with a silver coloured kickplate on the lower edge. The foglights, which complete the front-end styling, sit in a larger cluster than before.

At the side, the Sportage retains its traditional SUV-like styling, but has a marginally more raked profile than before. The wheelarches are more pronounced, while it also gets a sharp line running along the side doors.

The company says the look at rear of the car is inspired by the 2013 Kia Provo, with a strong line running horizontally across the bootlid between the two tail-light clusters. The indicator and reversing lights are much lower down than before and sit in a separate cluster on the rear bumper 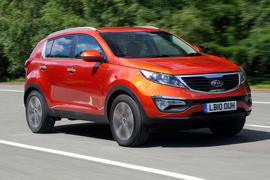 The new model is also likely to get a significantly upgraded cabin over the old version. UK Kia boss Paul Philpott said this was partly as a result of feedback from owners of the current car.

“We recognise that for a more demanding audience issues such as interior quality, refinement and ride and handling are essential,” he said. “All of those aspects have been addressed. We have done this because of what our customers have told us.”

There is only one design of interior, although the size of the infotainment screen is set to differ depending on specification. It will come with a greatly reduced number of buttons on the central console.

Kia has also said the cabin will feature a “rich material quality” to improve perceived quality, while it will come with technology already found elsewhere in the company’s range, such as wireless phone charging and a system that helps when reversing into traffic. Top-level trims will feature high-end audio Harman Kardon stereo systems.

The Sportage is set to come with a brand new four-cylinder turbocharged petrol engine. Several of the units from the similarly sized Tucson, from Kia’s sister company Hyundai, are also set to be carried over, including the 113bhp 1.7-litre diesel and two versions of the 2.0-litre diesel, in 134bhp and 181bhp formats.

How much will the Sportage cost?"While we want to remain competitive in our sectors, we will have to reflect the fact that there is a lot of new technology and features in the new car – so undoubtedly there will be a premium over the outgoing model."

Are you planning to expand the Sportage into a wider family?"The compact SUV segment is growing all the time but we feel with new engines, new transmissions and a stunning new face that it will continue to grow in its marketplace. We are looking at possibilities in other parts of the growing SUV market and we will deal with those opportunities in due course."

What are the engine plans? Could there be a plug-in variant?"Our R&D team have plans to launch 22 eco-variants in our range by 2022 – so you never say never, but there will be no plug-in at launch."

Read our full review on the second-generation Kia Sportage

Is it just me, or has this

Is it just me, or has this car borrowed the headlights off the iX35?

Like others, I can't declare this a successful update.

Yep the lights look identical to the Ix 35 front and rear , they probably re used them to save on tooling costs.I had to have my ix35 rear lights replaced as they went mildewy along with 5 rear sensors, i know there are only four but one replaced for a third time.You certainly need the 5 year warranty if my experience is replicated.
Andrew Lee 27 August 2015

In case no-one's said it yet: that front end has some Cayenne going on (and the 4 little lights are horrid!)
fadyady 27 August 2015

The new front looks a bit frumpy in the first picture. Thing is it is quite difficult to judge the looks of a car from pictures. Must see in metal.
View all comments (23)