Although previews have shown the car's rear in greater detail, with the exhausts and part of the rear lights exposed, the leak shows the car's entire look, ahead of the car's debut later this evening.

Another recent image, which was allegedly originally taken by AMG boss Tobias Moers and uploaded to an Frankfurt motor show on 11 September, confirmation of the potential top speed accompanies a third image of the £2.4 million coupé issued by Mercedes-AMG, showing its muscular silhouette along with a series of new design cues. The car will possess a top speed exceeding 218mph, the German car maker has revealed.

The darkened image exposes the front end of the new flagship Mercedes-AMG model for the first time, including its distinctive LED headlights, with each incorporating three separate U-shaped elements.

The thin-line headlights are mounted well outboard on heavily rounded bodywork. The new image also reveals a vertical wing element mounted low down on the outer left of the front end – evidence that Project One is set to receive a race-grade aerodynamic package already promised by Mercedes-AMG chairman Tobias Moers. 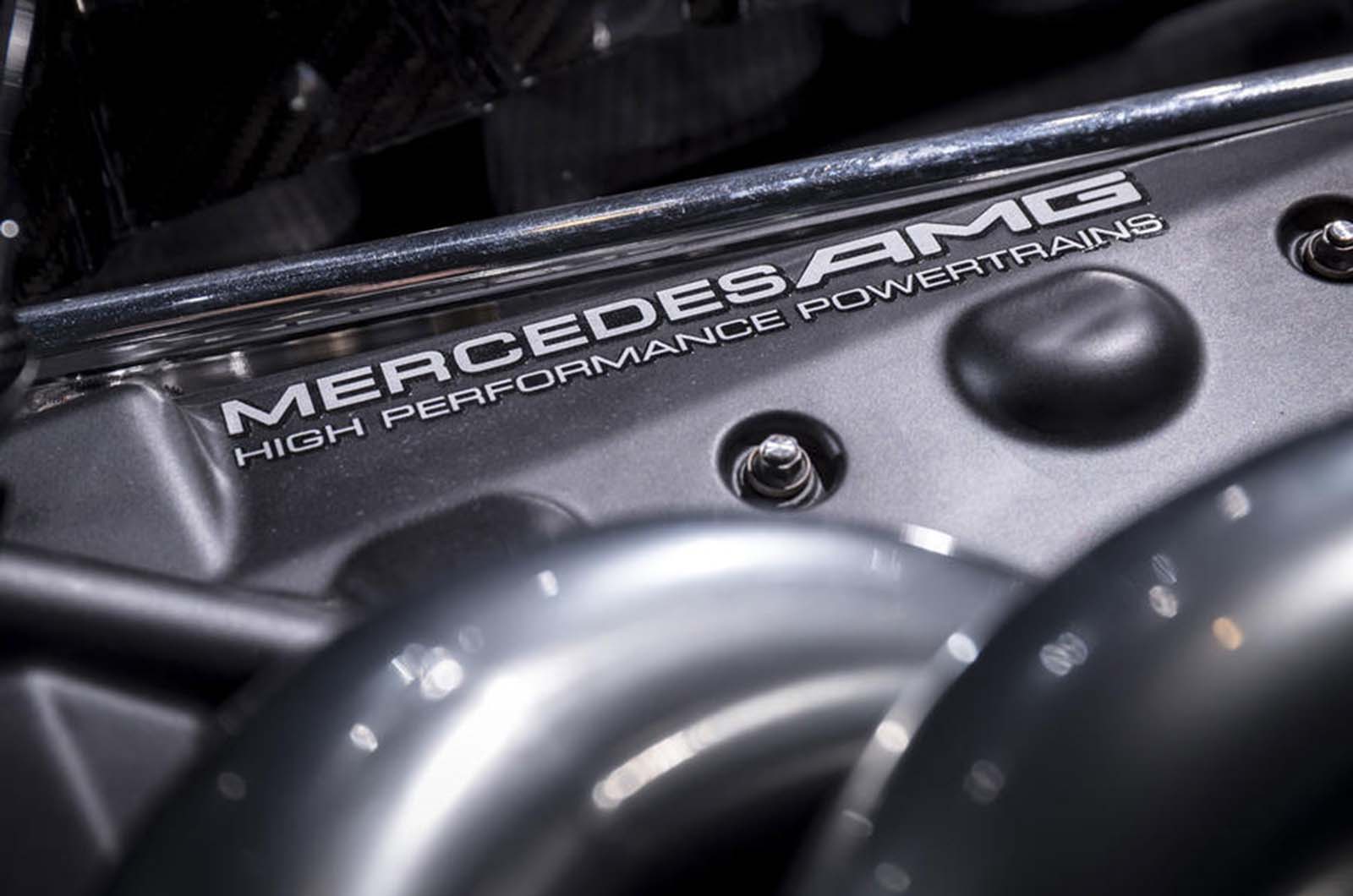 Further details depicted for the first time include the silhouette of the new limited-volume Mercedes-AMG model’s two-seat cabin. It receives a wide indent along its centre line and is topped by a large air vent that is used to cool the engine.

Overall, the latest image of Project One also serves to emphasis the width of the new hypercar, which receives an oversized Mercedes-Benz badge and an AMG graphic within its central front air duct.

Mercedes-AMG’s most ambitious road car to date will be powered by an advanced petrol-electric plug-in hybrid drivetrain based around a Formula 1-derived petrol engine that operates in combination with four electric motors to deliver an overall output of more than 1000bhp in its most performance-oriented driving mode. 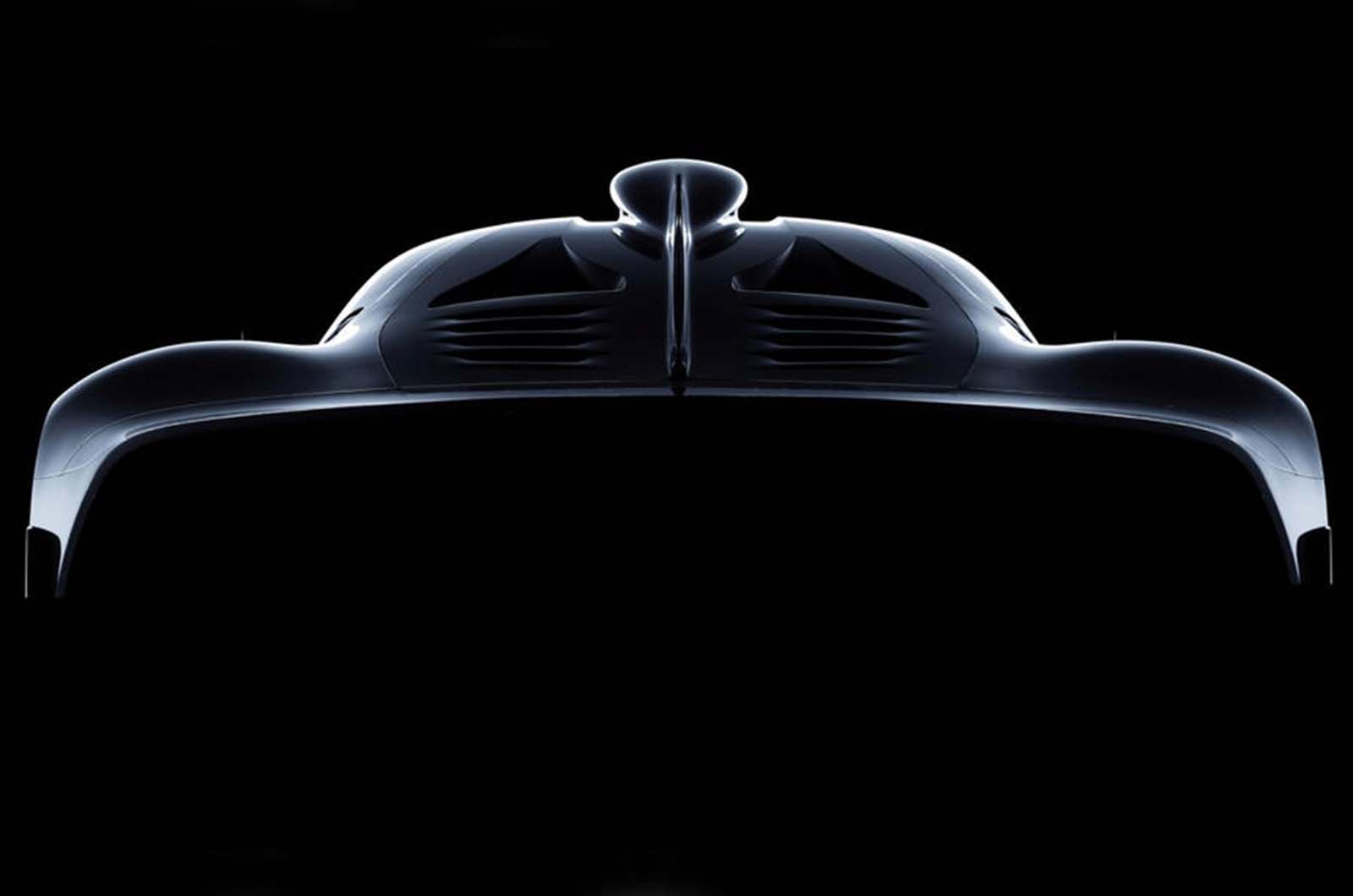 The high-tech driveline uses a heavily revised version of the electrically turbocharged 1.6-litre V6 housed in the Mercedes-AMG W08 EQ Power+ race car, as driven by Lewis Hamilton and Valtteri Bottas in the 2017 F1 World Championship.

The former, developing 134bhp, acts as an electric motor under acceleration and a generator to recuperate kinetic energy under braking, with the latter, rated at 80kW, used to electrically power the petrol engine’s turbocharger for instant response and convert heat from the turbocharger into electrical energy for storage in the new car’s sophisticated battery.

Channelling Project One’s heady reserves is an eight-speed automated manual gearbox that acts as a structural bearing element within the driveline at the rear of the engine, where it supports an intricate five-link rear suspension featuring pushrod style spring and damper units.

In a departure from the car maker’s rear-wheel-drive F1 race car, the new headlining AMG model’s front wheels can be driven individually by two electric motors and a pair of fixed ratio gearboxes mounted within the front axle assembly, with torque distributed selectively to the wheel with the most grip – a layout mirroring that of the earlier pure-electric Mercedes-AMG SLS Electric Drive to provide Project One with four-wheel drive capability. Called AMG Toque Dynamics, the electronically control system mimics the rear wheel torque vectoring effect seen on other less extreme four-wheel-drive AMG models.

The two front-mounted electric motors deliver a combined 322bhp exclusively to the front wheels, providing Project One with a claimed range of up to 16 miles in pure electric mode, according to Moers. When required, the MGU-K can also provide electric drive to the rear wheels, essentially endowing it with pure-electric four-wheel-drive capability.

The battery used to power Project One’s four electric motors is based on the same lithium ion cell technology found in the Mercedes-Benz F1 racer. Boasting four time the energy density as the battery used in the race car, it is mounted low towards the front of the floor structure, providing it a favourable front-to-rear weight distribution and low centre of gravity.

The advanced new plug-in hybrid system is claimed to weigh 420kg, with the batteries adding a further 100kg. Moers is tightlipped on Project One’s overall kerb weight but admits earlier claims that it will be under 1000kg are premature. “There are a lot of regulatory factors to consider. We have to build in all the safety features, including crash structures,” he says.

Engineering for the hypercar is being carried out in a joint programme between AMG in Affalterbach, Germany and its High Performance Powertrain sister company located in Brixworth, England. Moers claims it achieves a thermal efficiency of 43%. By comparison, the thermal efficiency of AMG’s existing twin-turbocharged 4.0-litre V8 is put at 25%.

Assembly of the production version of Project One is planned begin at AMG’s manufacturing headquarters at Affalterbach during the third quarter of 2018, before deliveries start late next year.

Moers says AMG is developing a special progamme to support buyers of Project One, although he suggests the new car will not be as difficult to drive as many anticipate: “Because of the F1-derived technology used by the new car, prospective buyers have been asking if they will require a support crew or dedicated lubricants to run it. My answer is always no. It will be a street car. You keep it plugged in in the garage. You fill it with fuel. That’s it.”

Kind of bland looking. Sort of an 80s vibe to it. Sure it'll be very rapid though.

Sir you could be correct! The Valkyria could be what 300 kg lighter?

It just hit me.... maybe Mclaren should by ALL Project one cars and use the engines in their F1 cars. Can't be worse then the Honda trash. :-P