BACK TO ALL NEWS
Currently reading: 2018 Mercedes-AMG Project One powertrain specs revealed
UP NEXT
Ford to revive more historic model names for new cars

The new £2.4 million Mercedes-AMG hypercar, known under the internal working name Project One, will be powered by an advanced petrol-electric plug in hybrid drivetrain based around an Formula One derived petrol engine that operates in combination with four electric motors to deliver an overall output of over 736kW in its most performance orientated driving mode, AMG boss Tobias Moers has confirmed.

The hi-tech driveline, unveiled at a media event at the Nürburgring 24 Hour race in Germany, uses a heavily revised version of the electrically turbocharged 1.6-litre V6 housed in the Mercedes-AMG W08 EQ Power+ race car, as driven by Lewis Hamilton and Valtteri Bottas in the 2017 F1 World Championship. The former, developing 100kW, acts as an electric motor under acceleration and a generator to recuperate kinetic energy under braking, with the latter rated at 80kW used to electrically power the petrol engine’s turbocharger for instant response as well as to convert heat from the turbocharger into electrical energy for storage in the new car’s sophisticated battery.

Channelling the Project One’s heady reserves is a an eight speed automated manual gearbox that acts as a structural bearing element within the driveline at the rear of the engine, where it supports an intricate five-link rear suspension featuring pushrod style spring and damper units.

In a departure from the German car maker’s rear-wheel drive F1 race car, the new headlining AMG model’s front wheels can be driven individually by two electric motors and a pair of fixed ratio gearboxes mounted within the front axle assembly with torque distributed selectively to the wheel with the most grip – a layout mirroring that of the earlier pure electric Mercedes-AMG SLS Electric Drive to provide the Project One four-wheel drive capability. Called AMG Toque Dynamics, the electronically control system mimics the rear wheel torque vectoring effect seen on other less extreme four-wheel drive AMG models.

The two front mounted electric motors deliver a combined 240kW exclusively to the front wheels, providing the Project One with a claimed range of up to 25km in pure electric mode, according to Moers. When required the MGU-K can also provide electric drive to the rear wheels, essentially endowing it with pure electric four-wheel drive capability. The battery used to power the Project One’s four electric motors is based on the same lithium ion cell technology found in the Mercedes-Benz F1 racer. Boasting four time the energy density as the battery used in the race car, it is mounted low towards the front of the floor structure, providing it a favourable front-to-rear weight distribution and low centre of gravity.

All up, the advanced new plug-in hybrid system is claimed to weigh 420kg, with the batteries adding a further 100kg. Moers is tightlipped on the Project One’s overall kerb weight but admits earlier claims suggesting it will tip the scales under 1000kg are premature. “There are a lot of regulatory factors to consider. We have to build in all the safety features, including crash structures,” he says.

Engineering for the Mercedes-AMG hypercar is being carried out in a joint program between AMG in Affalterbach, Germany and its High Performance Powertrain sister company located in Brixworth, England.

The production version of the Project One is planned to be unveiled at the Frankfurt motor show in September before a start to deliveries in late 2018.

Moers says AMG is developing a special progam to support buyer’s of the Project One, though he suggests the new car will not be as difficult to drive as many anticipate.

“Because of the F1 derived technology used by the new car, prospective buyers have been asking if they will require a support crew or dedicated lubricants to run it. My answer is always no. It will be a street car. You keep it plugged in in the garage. You fill it with fuel. That’s it.”

Talking about the F1-derived powertrain, Moers told Autocar: "We have to change something for sure. 3500-4000 revs is not that great for the road." He added: "The red line is over 10,000 even in the street legal car." In fact, Moers has since confirmed that the Project One will be able to rev to 11,000rpm. 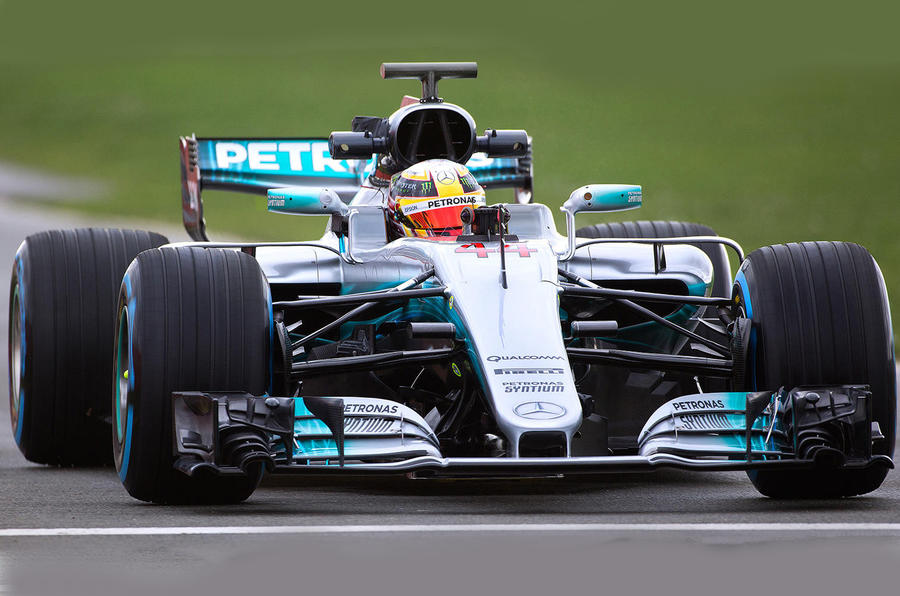 Moers has previously talked about using the F1 powertrain: "Our F1 engine is far more durable than many people expect, and if you look at the load it must take in an F1 race compared to how it’s likely to be used in a street-legal machine, you can see it’s going to have a lot less work to do." The unit is expected to have more power than that used in an F1 car.

The hypercar's MGU-K converts mechanical and heat energy into electrical energy that can be stored for later deployment, and the MGU-H that takes heat from the exhaust and uses it to create electrical energy.

It is as yet unknown how the engine will be made emissions-compliant. The car will uses an automated manual transmission as an F1 transmission would need to be heavily adapted to suit a roadgoing application. "I can tell you we will be using an 'AMT' (automated manual transmission) because there's no twin-clutch gearbox capable of working with an engine that revs to 11,000rpm," said Moers. "We will have four electric motors - one for each front wheel, one on the crankshaft and one on the engine turbocharger. We will use the same 'perfomance' battery cells as the F1 cars, which have advantages and limitations; but we will still be able to deliver 30km of EV range. And our target for kerbweight is 1300kg 'DIN'"

Moers has previously confirmed that Lewis Hamilton will join the team of development drivers testing prototypes of the car, but only "when the time is right".

Mercedes board member Ola Källenius has said the powertrain should be "unique" in the market. At the time, he emphasised that despite its hardcore nature, the car will be able to be driven on the road and will not be a track-only special edition.

Moers said the design target for the hypercar was to create "the most efficient hypercar with an outstanding driving dynamic capability, not necessarily the most powerful". When asked what he meant by ‘efficient’, Moers simply replied: "In every respect", which indicates an unprecedented combination of power, light weight and low fuel consumption.

Having already confirmed a headline power target for 'Project One' of 1000bhp, Mercedes-AMG should therefore be dropping the hypercar into the market with a 770bhp-per-tonne power-to-weight ratio. That's enough to narrowly beat the equivalent figure of the new Bugatti Chiron, although it does threaten to leave the AMG a little adrift of the car that must be imagined as its closest rival - the Aston Martin Valkyrie - whose 900bhp hybrid V12 powertrain is expect to motivate a car weighing less than a tonne overall. It remains to be seen how much torque either the Mercedes-AMG or the Aston Martin will produce, of course.

Moers is not ready yet to talk about acceleration targets for the car, but he did hint at top speed potential. "This will not be a top speed car," he said. "We will certainly be beyond 350kmh (217mph) but to go far beyond that brings too much compromise for me: to tyres, to aero & to handling balance."

The Mercedes-AMG hypercar was originally confirmed by the company's head of research and development, Thomas Weber on the eve of the Paris motor show in late September 2016.

"I am very excited to officially confirm: our next big thing at AMG is already in the pipeline," said Weber. "We are going to create an AMG performance hybrid featuring our Formula 1 drivetrain technology. Under the lead of AMG, our performance companies will join forces and create the most efficient and, at the same time, the best-performing and most spectacular AMG of all time; some might even call it a hypercar.

"But no matter what you call it, it will definitely show how we will take our performance brand into the future with extremely efficient and intelligent drivetrain technology. Of course, there will be no compromises in terms of the emotional appeal of this car."

I think this will be amazing.

I think this will be amazing. It's pretty awesome to think a roadcar will exist with an F1 derived engine. If you are a car fan you've got to love that! Respect to Mercedes AMG for going ahead with this project
Symanski 10 March 2017

Will this be Mercedes's F1 Swan Song? They've achieved everything they could hope for in F1, time to exit on a high.
View all comments (15)