BACK TO ALL NEWS
Currently reading: BMW i3 facelift launched with 181bhp i3s range-topper
UP NEXT
Exclusive: Morgan bosses detail ambitious growth plans

BMW has unveiled the BMW i3s – an updated version of its three- year-old electric-powered hatchback featuring a more sporting appearance, added reserves and an upgraded wheel and tyre package.

It heads a new four-model strong facelifted i3 line-up that's on display at the Frankfurt motor show. Sales have kicked off now, with prices for the range starting at £34,070. The i3s starts at £36,975.

Central among the changes brought to the new i3s is a more powerful synchronous electric motor. With 181bhp and 199lb ft of torque, the rear mounted unit is tuned to deliver a subtle 13bhp and 15lb ft more than the in-housed produced motor used by the standard version of the facelifted i3, which continues to produce 168bhp and 184lb ft.

Both new i3 models deliver drive to the rear-wheels via the same a fixed ratio gearbox. But while the standard i3 runs restyled 19-inch wheels shod with the same 155/70 profile low rolling resistance as the original model launched in 2014, the new i3s comes with larger 20-inch alloys and wider 195/50 profile rubber.

With the larger wheels and greater levels of standard equipment, the i3s tips the scales 20kg above its standard sibling at 1265kg. However, its added power and torque sees it post a faster 0-62mph time at 6.9sec versus the claimed 7.2sec for the standard i3. The new range topping i3 model also reaches a higher limited top speed of 100mph against the 93mph of its less powerful sibling.

In a bid to improve its agility, BMW has provided the i3s with a 40mm wider rear track. It is combined with a sport suspension featuring a 10mm lower ride height than the standard i3, together with uniquely tuned springs, dampers and anti-roll bars.  Further changes are concentrated at the dynamic stability control system, which receives new software that is claimed to provide it with faster and improved response to a loss in traction.

Another new feature is the sport driving mode that allows the driver to call up more direct properties for the steering and throttle. 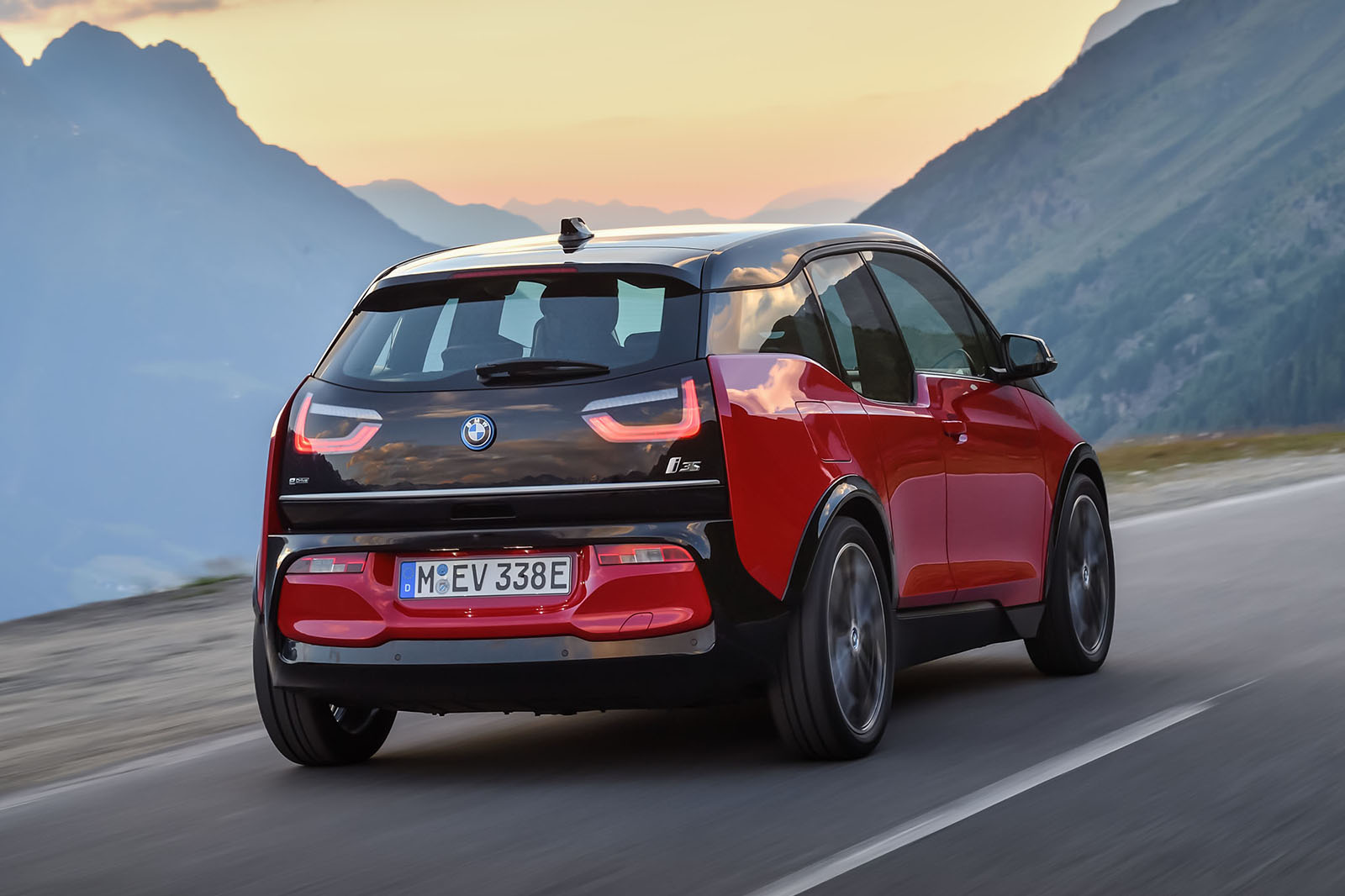 The new i3 and i3s use the same 94Ah lithium ion battery that was introduced as a running change to the zero-emission BMW in early 2016. With a capacity of 33.2kWh, it is claimed to provide both models with a maximum range of between 146 and 158 miles on the new WLTP (Worldwide Harmonised Light Vehicle) test procedure cycle, with the more familiar but less representative NEDC (New European Driving Cycle) test figure unchanged at 186 miles.

As with the facelifted version of the standard i3, the new i3s also comes with an optional range extender in the form of a rear-mounted 647cc two-cylinder petrol engine. Bringing an additional 120kg in kerb weight, it acts purely as a generator, providing electrical charge to the floor mounted battery when required.

The stylistic changes brought to the facelifted i3 are relatively subtle. Included among the mid-life makeover is a new front bumper. It features greater structure and dispenses with the round outboard high beam lights for new thin line LED units that act as blinkers. The headlamps have also been upgraded with LED functions for both the dipped and high beam. The new model also features a black roof, revised sills, lightly altered tail lamps graphics and a revised rear bumper.

On top of this, the i3s gains subtle wheel arch flares as well as blue highlights within the bumpers and along the sills.

Inside, the 2018-model-year i3 receives revised trims and upholstery together with a new 10.3 inch infotainment display featuring a new tile based operating system.

Electric Mini to be previewed in Frankfurt concept

Actually I'd say that the 120kg weight of the generator is pretty good. Don't forget this includes a two cylinder petrol engine, fuel tank plus a high capacity 25kw alternator and control system. By way of comparison,  a 3kw stand alone Honda generator weighs 60kg (and costs around £2.5k), so overall and given the low production volume,  I think BMW has done a good job.

A near enough £40,000 car with options and it has got cheap cost cutting bonnet mounted windscreen washers. BMW should be ashamed. Even after decades of Ford tight arsed penny pinching the new Fiesta has now got them intregated.
volvocu 29 August 2017

This car is great IMO, if I were in a market for a second car for city use and had the funds that would cover its selling price this EV would be at the top of my list. Looks great, interior is spacious, functional and top quality, feels good to drive and has more than enough range. Oh and the comment that its overweight is ridiculous, thanks to CF construction it weighs only as much as mainstream subcompact cars!