BACK TO ALL NEWS
Currently reading: Audi cuts product portfolio by nearly a third
UP NEXT
2022 Mercedes-Benz EQE: images preview EV's radical design

Audi has simplified its range by more than a quarter over the last year, in response to not only cost-cutting but also consumer demand for less complexity.

Options as well as gearbox, engine combinations and certain models for certain markets have been axed, resulting in a 27% reduction in the product portfolio, and there is still more to go, said CEO Bram Schot.

“It is not easy because at a global perspective, a take rate of 1 or 2% sounds like an easy decision but in a specific country that could be 70% of your sales. It’s very hard decision-making. We’ve done it, and we’re down 27% so that’s huge.”

Further culls could also include model lines. Schot commented: “It’s not only models but variations - do we want to have a normal saloon and a sportback? We’re discussing this currently for a specific model.”

Schot said he wants to have 30% less model lines. However, he added Audi wanted to grow in higher segments with models such as the A6, A7, Q7 and Q8. At the same time, they want to attract younger customers which requires the need for more affordable, small cars.

“We want to get more penetration in high-end segment, but at the same time we want to increase young customers which you do not find in that segment.

He continued: “If you take an average customer over 50 years old, they have a completely different requirement set to connectivity and digitalisation than a 25 year old. But the cars where you can afford that most is the cars bought by those over 50.

"How do we invest more in smaller cars which are affordable to [younger people]? And compare that with the high-end segment where more older drivers have less requirements on digitalisation and connectivity It is an interesting game we have to play for the future.” 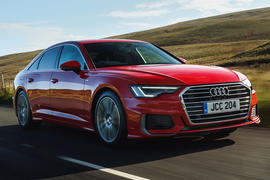 The 55 TFSI petrol engine is least likely to be bought, but it's a commensurately effective powerplant for a cultured car

They want to attract more

They want to attract more younger buyers, yet at the same time they get rid of small 3-door hatch versions of the A1 and A3?  Interesting planning.

Yet they keep on adding models like the Q3 Sportback. Yup, that's a totally necessary car /rollseyes. Those 27% definitely include the end of 3 door hatchbacks ( A1 and A3 ). The full 45% will see the upcoming end of the A3 Convertible ( sure ), and the more-than-likely ends of the R8 ( meh ) and TT ( :/ )

Shame you didn't ask him about the cost cuts, namely those applied to the quality of their interiors. The A1 and Q3 are huge steps backwards from their predecessors. Not that that is reflected in their pricing, mind you.