BACK TO ALL NEWS
Currently reading: Volkswagen ID electric microbus concept to be revealed at Detroit motor show
UP NEXT
Testing the UK's newest circuit in a Porsche Cayenne Turbo GT

Inspired by the original VW Microbus, the space concept is based on the MEB platform that's shared with the ID hatchback
Open gallery
Close

The second model in the Volkswagen ID electric model line-up, an MPV reminiscent of the original Microbus, is due to be revealed at Detroit motor show in January.

It is described by the car maker as a 'space concept', which refers to Volkswagen's intentions to provide the maximum possible accommodation inside the car.

The so-called space concept taps the iconic design and versatile layout of the original Microbus for inspiration, and follows the ID hatchback in what Wolfsburg officials suggest will be a series of new self-driving electric-powered concept cars to be unveiled in 2017.

It's the second electric MPV concept to come from VW in recent times - the Budd-e of the 2016 Consumer Electronics Show was the first.

Pictured here in a series of teaser photographs ahead of its world premiere at the Detroit motor show, the concept is based around Volkswagen’s versatile new MEB (modularen Elektrifizierungsbaukasten – modular electrified architecture) platform first unveiled underneath the ID hatchback at the Paris motor show last September. Intended to bridge the gap between one of Volkswagen’s most heavily admired models and a future electric car line-up, the multi-seat concept is described as featuring “outstanding accommodation” together with an “extended electric range”.

The three photographs released by Volkswagen reveal the front- and rear-end styling treatment of the new concept, which receives distinctive horizontally positioned LED headlamps and tail lamps similar in appearance to those adorning the ID hatchback.

Among the exterior design elements that hark back to the Microbus is an upright front end with what appears to be an almost vertical windscreen and minimal overhang. It supports a large illuminated VW badge and V-shaped feature line that recall the detailing of Volkswagen’s original MPV. 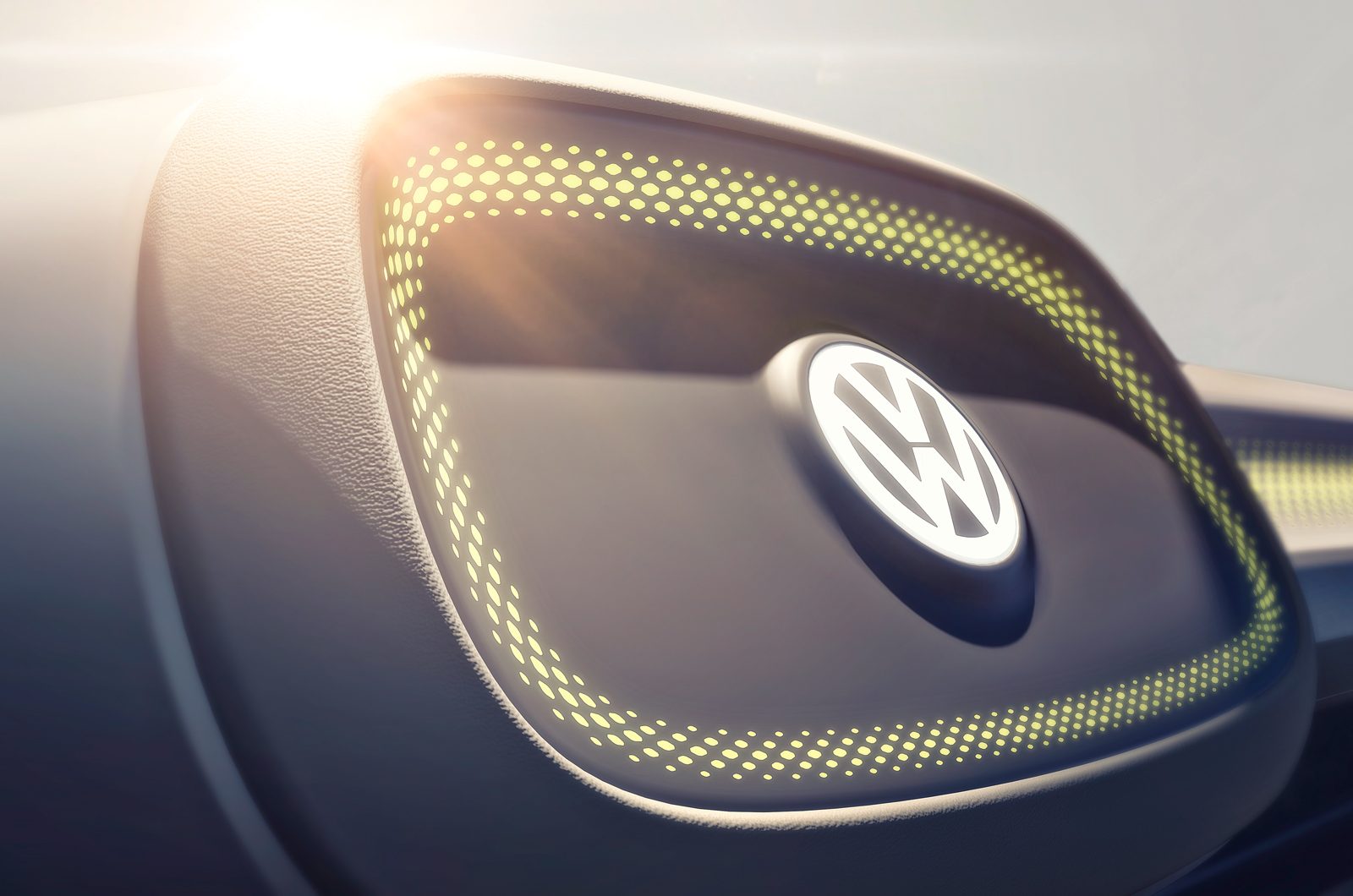 One of up to five advanced zero emission models being considered for production as part of the German car maker’s recently announced Future 2025 plan that targets up to 500,000 electric car sales by the middle of next decade, the second ID concept features a drivetrain with two electric motors and four-wheel drive capability.

Volkswagen is holding back on further details on the drivetrain for the Microbus-inspired concept. However, it confirms the new MPV will receive similar connectivity and autonomous driving functions as the original ID concept.

Included is a retractable steering wheel depicted on one of the teaser photographs of the new concept.  When activated via a touch sensitive pad, it triggers the autonomous driving functions, which use laser scanners, ultrasonic sensors, radar sensors and digital stereo cameras, before retracting to provide the driver with greater space.

The boss of Skoda has gone on record to say that his company will never build a hydrogen powered car as long as he's in charge. Given the massive pressures involved in hydrogen storage and the potentially lethal effects of it going wrong in a car, it seems amazing that governments worldwide haven't intervened with draconian regulations.
tuga 22 December 2016

Hopefully a) it looks better than the first ID concept, which was the definition of bland, and b) they actually make it, after having teased it for almost 20 years now.

... pretty sure this defines most of the cars on sale right now.

If the cost of providing the additional generation capacity gets included in the future cost of electricity that will have a massive impact on the cost of your household bills and the cost of goods and services as industry will be hit with higher energy bills too.
xxxx 22 December 2016

What would create hydrogen with then

If the cost of providing the additional generation capacity gets included in the future cost of electricity that will have a massive impact on the cost of your household bills and the cost of goods and services as industry will be hit with higher energy bills too.

As I've said you need huge amounts of electricity to create hydrogen way MORE than to directly power an EV.
Back to EV's now, at the rate green power is increasing (Norway is now over 100%) most of the new needs will be taken up in 20 years time anyway. REMEMBER EV take-up will be over a long period

EV take up had better be slow

EV take up had better be slow, Hinckley Point C, one power station, will have taken over 20 years to deliver!
xxxx 22 December 2016

If the cost of providing the additional generation capacity gets included in the future cost of electricity that will have a massive impact on the cost of your household bills and the cost of goods and services as industry will be hit with higher energy bills too.

Hydrogen car currently £50,000(not including the £15,000 government grant!) and Autocar tested one at 29mpg* equivalent (*at cruising speed!).
That's what you call an increased cost!