BACK TO ALL NEWS
Currently reading: Mercedes-Benz to extend compact car line-up to eight models
UP NEXT
New 2023 Porsche 911 GT3 RS is "most track-focused" ever

Mercedes-Benz has announced plans to extend it compact car line-up from five to eight models by the end of 2020, in a move aimed at providing the German manufacturer with greater representation in important volume segments.

This new range, which high ranking Mercedes-Benz sources confirm will include a new Audi A3 saloon-rivalling four-door saloon and a BMW X1-challenging SUV with both five and seven-seat layouts, is to be based on a new modular platform set to be first used on the upcoming fourth-generation Mercedes-Benz A-Class (pictured testing above), which is due in early 2018.

MFA2 is said to employ more high-strength steel for greater stiffness and lower weight, will continue to provide front and four-wheel drive compatibility, and can accommodate both three and four-cylinder engines as well as manual and dual clutch gearboxes, with a new nine-speed dual clutch unit set to be used in the 2018 Mercedes-Benz A-Class.

Speaking at  the presentation of the facelifted first-generation GLA (below) on the eve of the Detroit motor show, Mercedes-Benz’s new sales and marketing boss, Britta Seeger (pictured with CEO Dieter Zetsche below) confirmed to Autocar each of Mercedes-Benz’s existing five compact models, the Mercedes-Benz A-Class, B-Class, Mercedes-Benz CLA, CLA Shooting Brake and Mercedes-Benz GLA, will receive successor models. 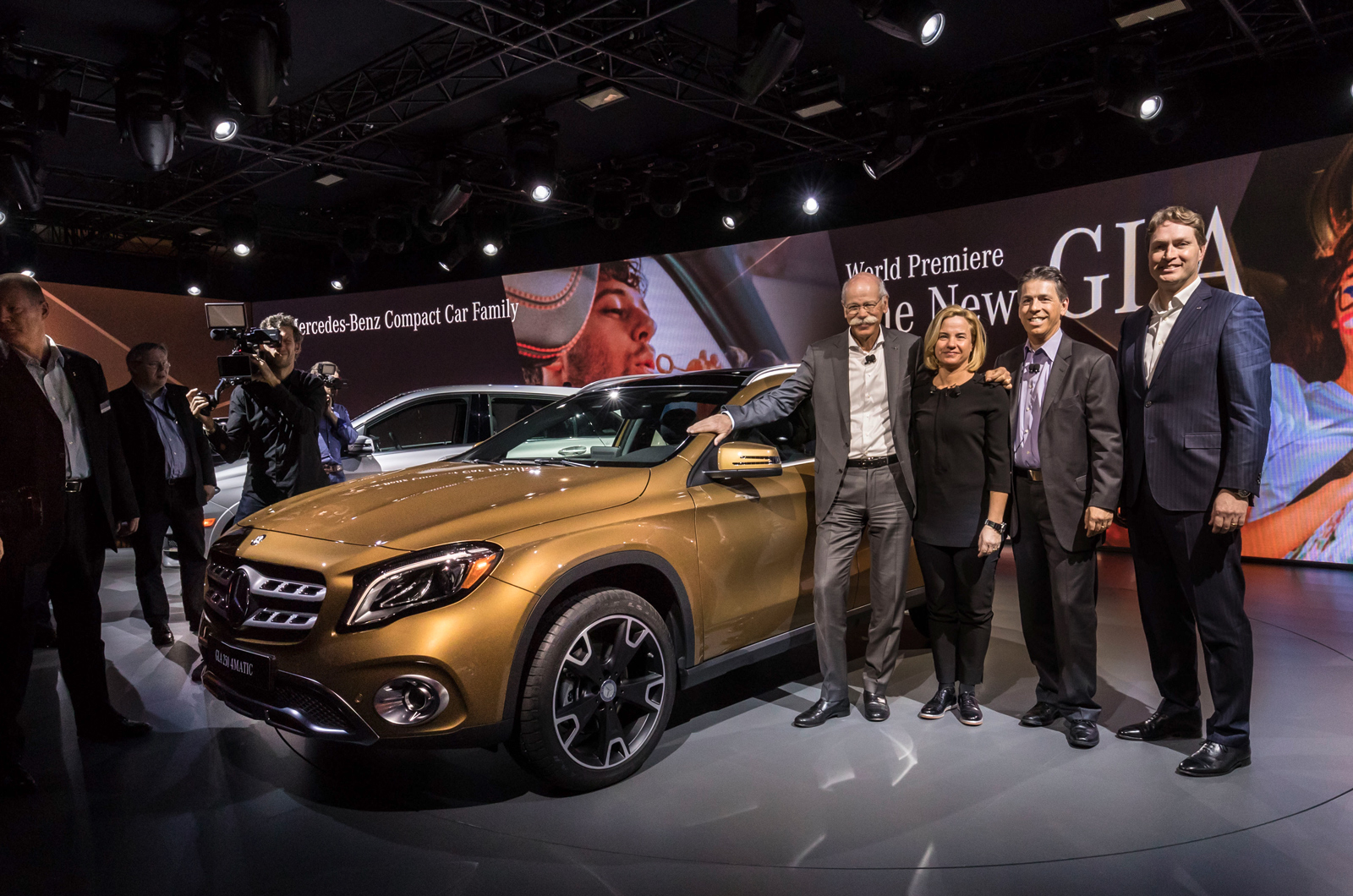 Additional models to the line-up will include a four-door saloon, which is planned to be produced with both a standard wheelbase for markets such as the UK and a long wheelbase exclusively for China.

This car, which is set to be previewed in concept form at the Shanghai motor show in April, is planned to rival the likes of the Audi A3 saloon and a four-door version of the BMW 1 Series which is sold in China and is also planned for sale in Brazil.

Also under development is a new compact SUV to be positioned above the GLA, likely taking the name GLB. Targeted at the Audi Q3 and BMW X1, it's also planned to produced in both standard and long wheelbase guises – the former with five seats and the latter with seven seats.

Among the factories planned to produce the Mercedes-Benz’s compact car models is a new site currently under construction in Aguascalientes, Mexico. Set to open in 2018, it will initially build the GLA but is also earmarked to produce the new A-Class saloon and the long wheelbase version of the GLB.

Agree with confused (above),

Agree with confused (above), this will lead to a confusing Merc lineup.

Why don't they produce a fastback A5/A7 style liftback hatch?

Something that is practical, yet more saloon/fastback styled than a full estate. Imagine a GLC, lower, not SUV like.