BACK TO ALL NEWS
Currently reading: Facelifted Mercedes-AMG GLA 45 seen in public with visual upgrades
UP NEXT
New Land Rover Defender V8 gets 518bhp and bespoke styling

The 2017 Mercedes-Benz GLA 45 has been spotted testing ahead of an anticipated debut at the Detroit motor show.

This is the first sighting of Mercedes's facelifted hot crossover model and shows that its visual updates will mirror those applied to the 2017 GLA, which has itself only just been previewed in a single teaser image.

The biggest changes to the GLA 45 are focused around its front and rear, where new bumpers and sleeker headlights will give the car a refreshed look. The styling tweaks will bring the GLA models more into line with the closely-related A-Class range. Unlike the regular GLA, the more potent 45 model doesn't look to have gained a raised ride height compared to its predecessor, and instead continues to sit only slightly higher than the AMG A 45 hatchback with which it shares many parts.

Along with the rest of the 2017 GLA range, the 45 will get Apple Carplay and Android Auto integration in its infotainment system, as well as a redesigned touch screen. 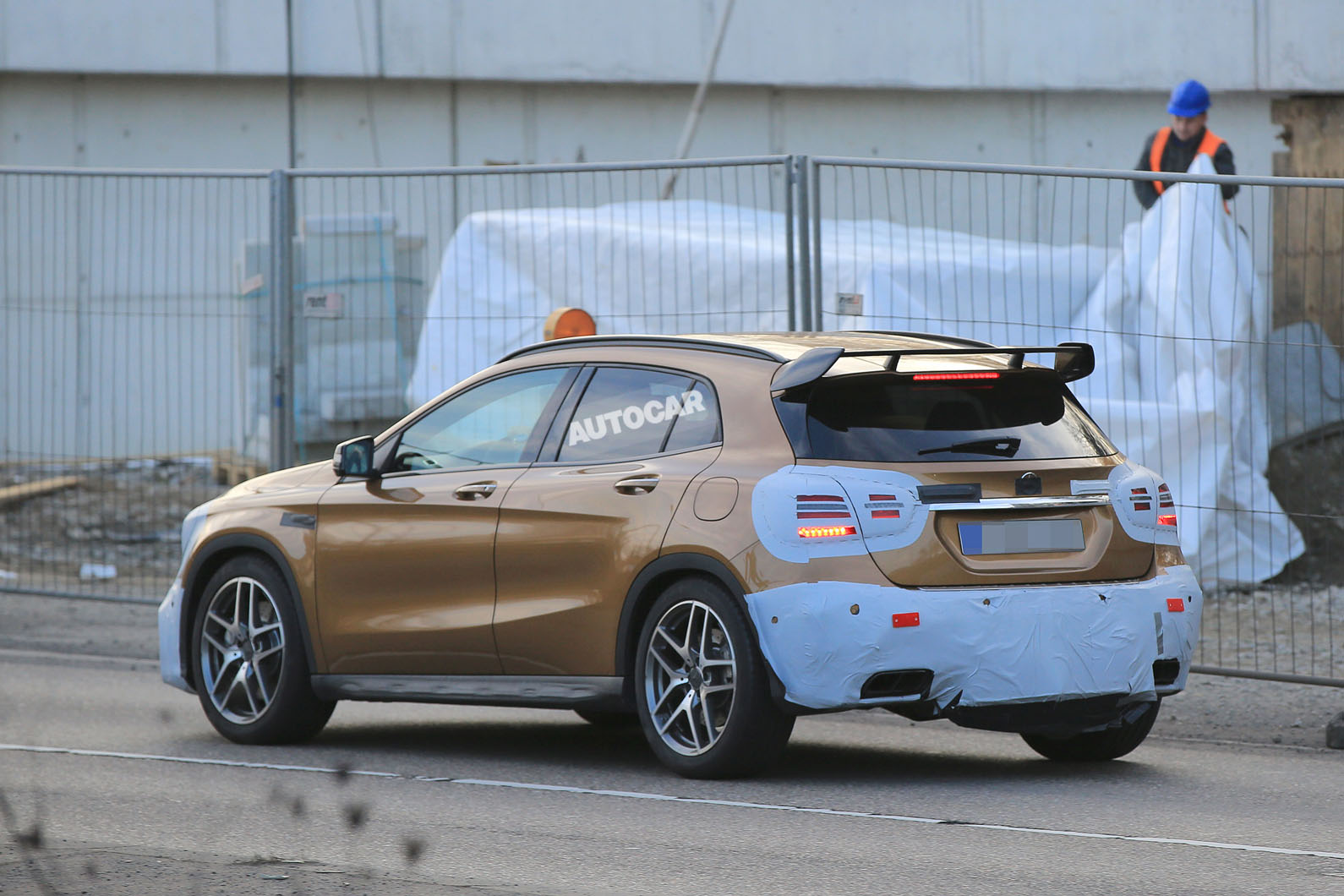 Under the bonnet of the GLA 45 will be the same turbocharged 2.0-litre four-cylinder engine that's featured in the A 45 hatch. Peak power output is expected to remain 376bhp like the outgoing car, as is torque, which currently tops out at 350lb ft at 2250rpm.

This should mean the facelifted all-wheel drive performance crossover will match the straight-line performance figures of the pre-facelift car, which can accelerate from 0-62mph in 4.4sec and onto a limited top speed of 155mph.

The 2017 GLA 45 will likely be revealed alongside the regular GLA facelift in Detroit next week. When it goes on sale later this year, expect a small increase on the current car’s starting price of £45,555.

I just dont get this particular class of car. Its not really an SUV, its not small or large or really medium, its ugly as sin with a stupid amount of power surely not really suited to such a high riding vehicle. Not really practical, not really desirable (or are they?) I have similar feelings about the X1, countryman etc but people must buy them and i suspect its just to get into the brand. For me the whole sub category of A-Class Mercedes are massively compromised so as not to tread on the toes of their bread and butter models but still carry the three points to lure in those who want in on the brand. The strangely shrunk CLA just looks odd as if squashed - really narrow, awful to drive, the GLA oddly perched up and unbelievably ugly as well as slightly too small looking, also poor to drive and the previous model really was a rung below on Merc quality. Still i guess people will buy them with only eyes on the badge.. depressing
TS7 3 January 2017

The GLA sitting outside my

The GLA sitting outside my front window has Android Auto and Apple Car Play with the revised Command and larger screen. It was revised with the A Class earlier this year.
View all comments (5)