BACK TO ALL NEWS
Currently reading: VW emissions scandal: Former diesel engines boss suspended
UP NEXT
How the Bugatti Chiron became the first 300mph road car

Volkswagen's former head of diesel engine development has been suspended following the results of an internal investigation, according to reports
Share
Close
Share story

The man who was in charge of Volkswagen's diesel engine development during the time of the company's emissions scandal has been suspended, according to reports.

Falko Rudolph, who was VW's head of diesel engine development at the firm's Kassel plant between 2006 and 2010, has reportedly been suspended following the results of an internal investigation, according to news agency Reuters.

The prosecutor’s office in Germany said that Winterkorn is being investigated over “allegations of fraud in the sale of cars with manipulated emissions data.”

In Germany, anyone can file a complaint with the prosecutors, and several were filed as a result of the emissions scandal last week. The prosecutors then decide whether to open a formal investigation, which has now happened.

Several VW executives are also reported to be on official leave from the company, with Audi R&D boss Ulrich Hackenberg, VW R&D chief Heinz Jakob Neusser and Porsche board member Wolfgang Hatz all said to be suspended - although this has yet to be confirmed.

Hackenberg is a long-time board member of the VW Group, and has had responsiblity for development for the Group as a whole and, more recently, Audi. Hatz is the VW Group's head of engines and transmissions, as well as being the research and development boss of Porsche. None of the three has been formally connected with an active role in the scandal, however.

Following chairman and CEO Martin Winterkorn's departure, the board of executives that governs Volkswagen AG had suggested that he wouldn't be the last top-line employee to leave his post as a result of the emissions testing scandal. A statement read: "With the information currently available the supervisory board recommended the immediate suspension of some employees. This process is already underway."

Already Christian Klinger, the VW Group's boss of sales and marketing and after-sales has left the firm "due to differences with regard to business strategy". VW confirmed Klinger's departure was unrelated to the emissions scandal. Former Skoda boss Winfried Vahland has also left the firm, and won't be taking up his new role as VW's US chief.

The VW Group executive committee has stated that it could pursue criminal proceedings against those found to be responsible for the manipulation. It will voluntarily submit a complaint to the State Prosecutors’ office and offer full support for any subsequent investigation.

Winterkorn announced his resignation in the wake of the scandal about a software cheat in American NOx emissions tests. The 68-year-old executive, who fought off Ferdinand Piech in a power struggle earlier this year, had been expected to have a fresh contract extension ratified by VW’s supervisory board this week.

An official statement from Winterkorn said: "I am clearing the way for a fresh start. I am shocked by the events of the past few days. Above all, I am stunned that misconduct on such a scale was possible in the Volkswagen Group.

“As CEO I accept responsibility for the irregularities that have been found in diesel engines and have therefore requested the Supervisory Board to agree on terminating my function as CEO of the Volkswagen Group. I am doing this in the interests of the company even though I am not aware of any wrongdoing on my part. 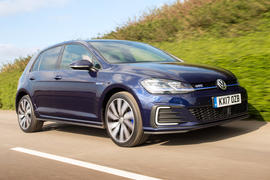 “Volkswagen needs a fresh start - also in terms of personnel. I am clearing the way for this fresh start with my resignation.

“I have always been driven by my desire to serve this company, especially our customers and employees. Volkswagen has been, is and will always be my life.

“The process of clarification and transparency must continue. This is the only way to win back trust. I am convinced that the Volkswagen Group and its team will overcome this grave crisis.”

The VW Group's interim chairman Berthold Huber said: "Mr Winterkorn has worked hard for VW and we would like to thank him for his efforts over the past 10 years, and also for his willingness to take responsibility in this most difficult of situations."

Six things the firm could cut

No mandatory recall for UK cars

Blog - How Volkswagen can survive its emissions scandal

Seems some disquiet on the

Seems some disquiet on the business pages that VW recruited from within to replace Winterkorn, rather than fresh leadership from outside the company. VW have drawn strength from their stable ownership, able to fulfil long term strategies rather than be pushed by quarterly announcements. But - it goes without saying - something went seriously wrong here.
Ski Kid 28 September 2015

Pleased that they were rumbled by the Yanks

Just shows what a bureauctatic mess the EU is ,can't even manage and audit testing cars ,immigration a mess and do we believe what the safety star rating is that is assigned to a car tested.I hope the latter is ok.
I have doubted Hyundai and VW /Audi for a while as we and our friends have had these vehicles and achieve 30 to 35% to40% less mpg than claimed .
fadyady 24 September 2015

This scandal is far from over. Not only more heads in the Volkswagen Group will fall, I even expect rumble in Angela Merkel's cabinet. And why not? They knew and they condoned the crimes that the Volkswagen Group was allowed to commit. As a result VW-Audi became so confident as to try it on in the US where the tests are far more strict and come very close to real life.
View all comments (11)