BACK TO ALL NEWS
Currently reading: UK autonomy project in partnership with JLR could slash urban traffic
UP NEXT
New Lotus electric sports car to use Britishvolt batteries

Thirty per cent of congested urban traffic is due to drivers looking for parking spaces. This tech aims to fight that
Open gallery
Close

The UK Autodrive project which kicked-off in 2015 to test autonomous vehicles on UK roads, has stepped up a notch with a demonstration of cars that can seek out spaces and park themselves.

The demonstration in Milton Keynes on March 22nd showcased two V2X parking-related technologies. The first called Collaborative Parking, identifies the location of available parking spaces in a car park and keeps the driver informed. When the car enters a car park it downloads a map from a roadside unit showing the availability of parking slots. As the car drives around the car park, the map is updated in real time by data from other connected cars in the same car park, showing parking spaces filling up and becoming vacant. 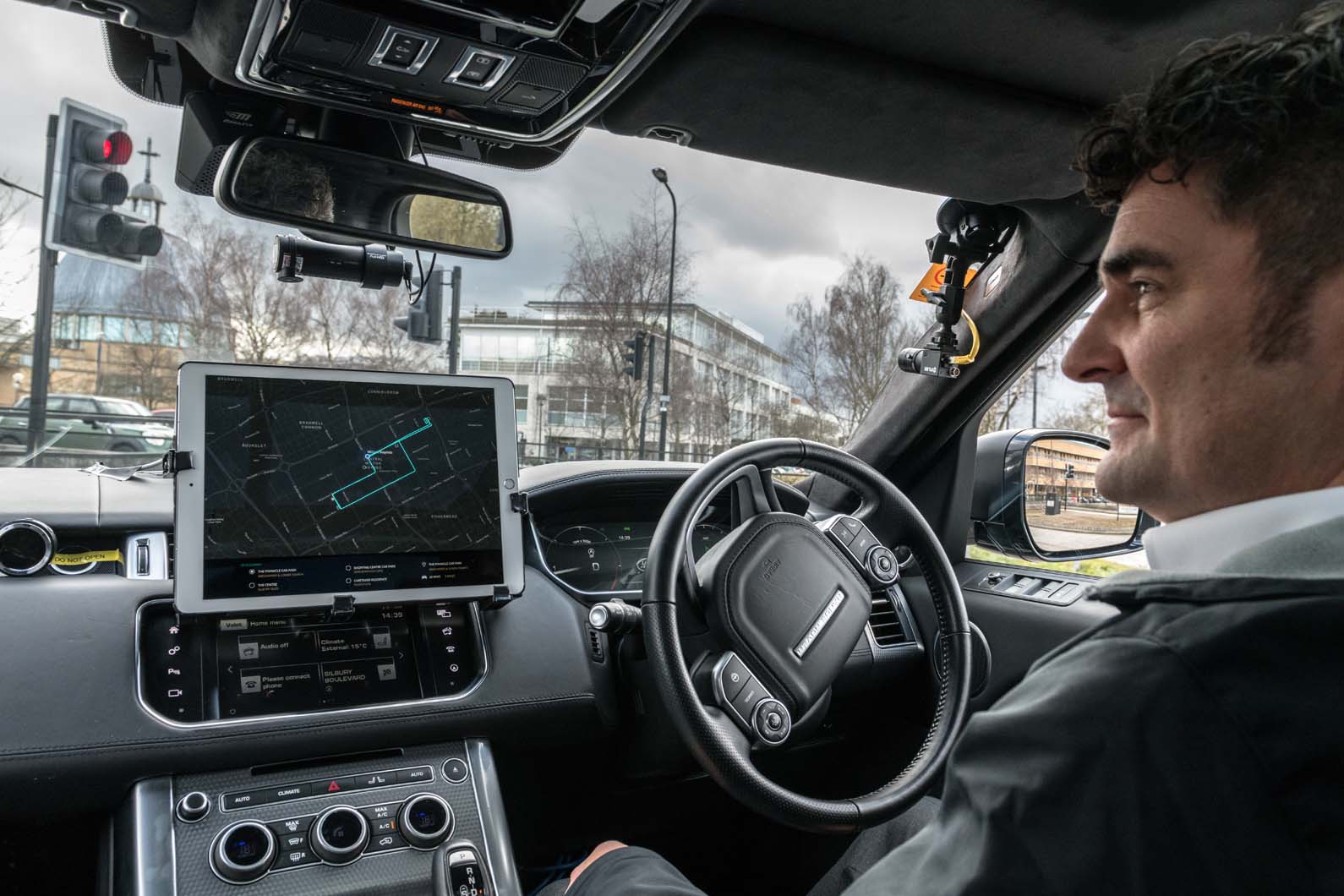 Project partners demonstrated the technology using a Ford Mondeo Hybrid, a Tata Hexa XTA and a Jaguar F-Pace. The cars connect by means of 5.9GHz WiFi technology dedicated for automotive use. Dennis Witt, a research engineer at Ford says: “Technically, the system is already there, it just needs production engineering and integration, but there are no plans to bring it to production yet.”

Andrew Harris, chief engineer, software, controls and driver assistance, at Tata Motors said the system is not vulnerable to hacking. “It is fully secure and uses the same encryptions as a banking system.”

The technology is already in demand, says Brian Matthews, head of transport innovation at Milton Keynes Council. “Each parking slot in Milton Keynes has a land value of between £10,000 and £15,000 and if we can help people find a convenient space quickly, we don’t have to oversupply spaces.” There are 25,000 parking spaces available in Milton Keynes but at the busiest times when the popular areas are very full, there will still be 3000-4000 spaces available throughout the town. Matthews also sees the technology reducing congestion and stress by helping people to find them. According to UK Autodrive, 30% of congested urban traffic is due to drivers looking for parking spaces.

Jaguar Land Rover demonstrated a more sophisticated technology which enables a prototype autonomous Range Rover Sport to drive to an available parking slot and self-park. The level four autonomous vehicle is equipped with two LIDAR sensors and a long-range radar sensor at the front, a single LIDAR sensor at the rear and two GPS antenna on the roof. Level four is the highest level of autonomy while still retaining a driver. At level five, a car becomes driverless. 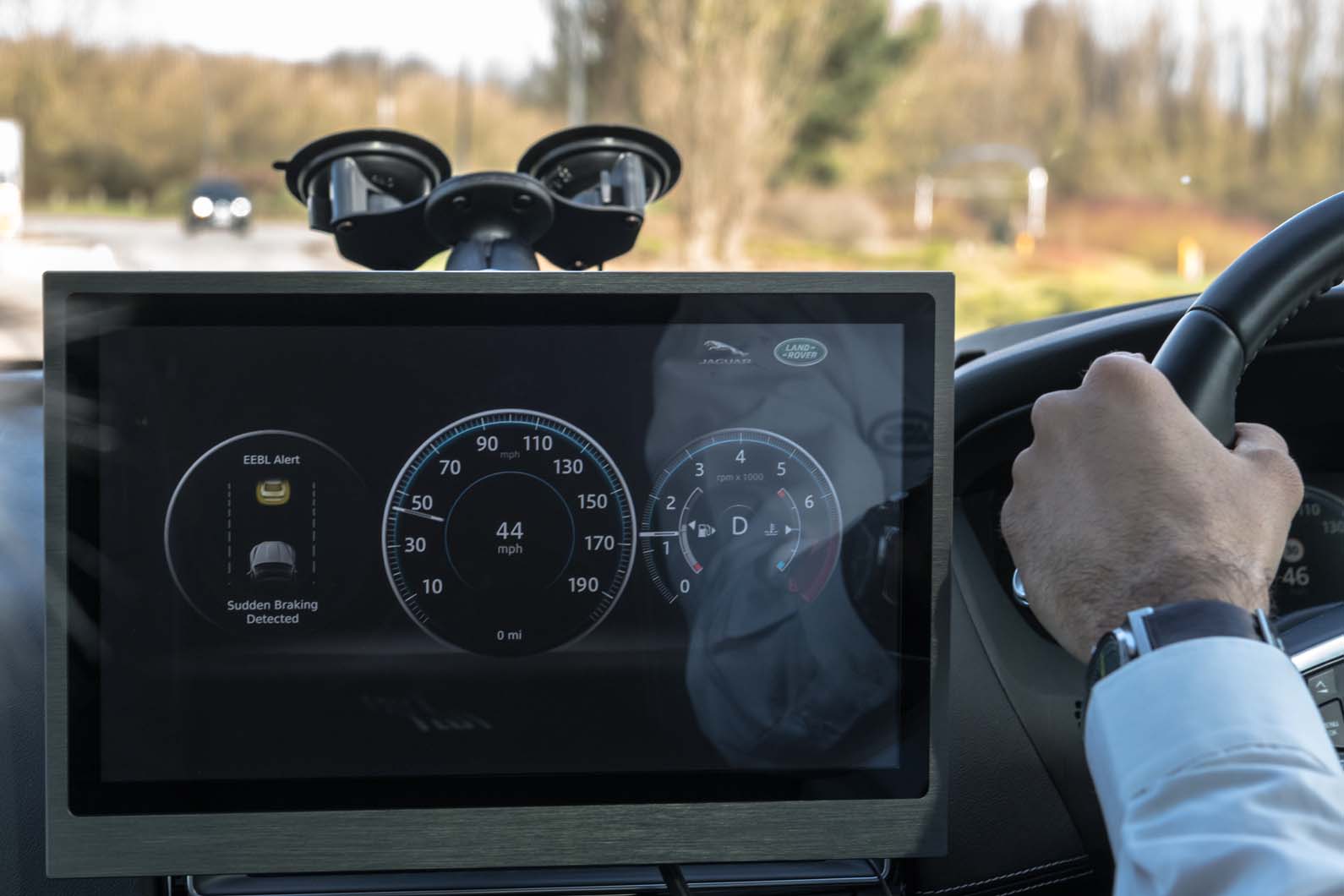 Work on this level started at Jaguar Land Rover in 2016 and has progressed quickly from level three, which essentially comprises advanced driver assistance systems. One of the main differences between the two levels, says Jim O’Donoghue, lead research engineer, level four autonomy, is the way in which the car hands back control to the driver. “It’s done in a timely manner rather than quickly like level three. If the driver doesn’t respond, the car will drive to a safe spot and park.” O’Donoghue says the technology could be ready for production in five to 10 years. It is expected that level four autonomous cars will share the roads with conventional cars for years to come.

The Autonomous Land Rover has been trialled on public roads before in Coventry, but this is the first time it had tackled roundabouts, which presented a new challenge in working out exit and entry points as well as right of way.

Arup’s Tim Armitage, UK Autodrive’s project director, says valet parking systems will allow autonomous vehicles to drop passengers off at their destinations before moving off to park out of town. Doing so will reduce the space needed for parking in city centres which could be put to better use. 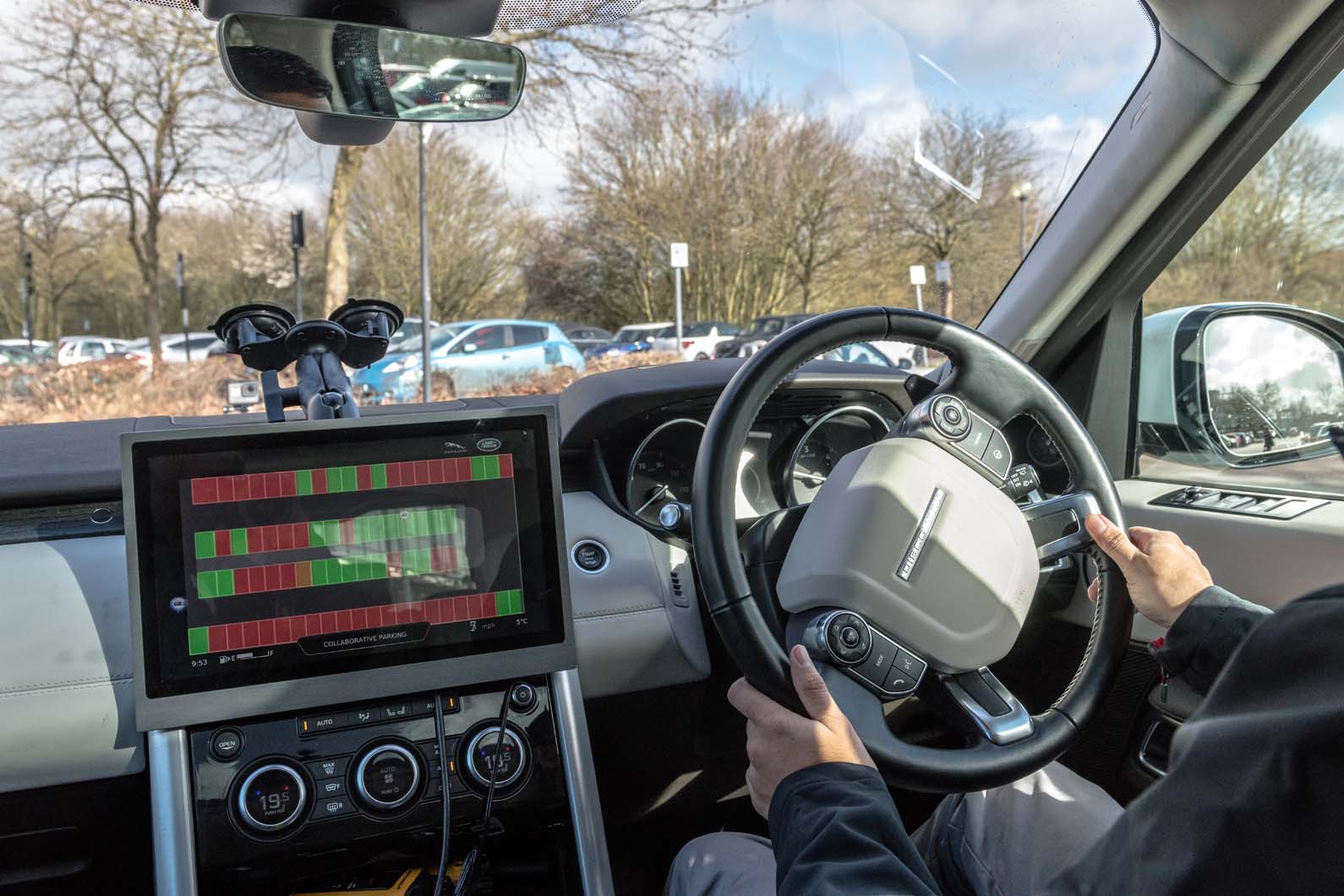 Two connected car safety features were also trialled on UK public roads for the first time. The first, Emergency Vehicle Warning (EVW) alerts a driver to an approaching emergency vehicle and the direction it is coming from. The second was Electronic Emergency Brake Light (EEBL) which alerts the driver when a similarly connected car further ahead brakes heavily. The system gives drivers crucial extra time to react to unseen problems ahead and avoid a collision.

This summer, UK Autodrive will also trial a fleet of 40 low-speed, self-driving pods in pedestrian areas of Milton Keynes. A final set of demonstrations involving both cars and pods is planned for this autumn, rounding off the three-year UK Autodrive project. The trial will demonstrate how a driver can pre-book a parking space and pod at the destination and be autonomously driven to the slot where the autonomous pod is waiting. The two vehicles check each other’s identity before switching places, the occupants of the autonomous vehicle then transfer to the pod to complete the journey.

How does it feel to be driven around town in a self-driving car?

Being driven by a self-driving car on a closed track is one thing but doing so on busy public streets is altogether different. We rode in the back seat with a driver and laptop-toting engineer in the front seats. The Range Rover Sport headed off on its pre-selected route to a car park in the centre of town, pretty much as normal except the driver wasn’t touching the steering wheel. It felt weird as the Range Rover Sport pulled up behind buses, manoeuvred into the correct lanes and responded to traffic lights, ‘seeing’ the coloured lights using cameras for eyes. 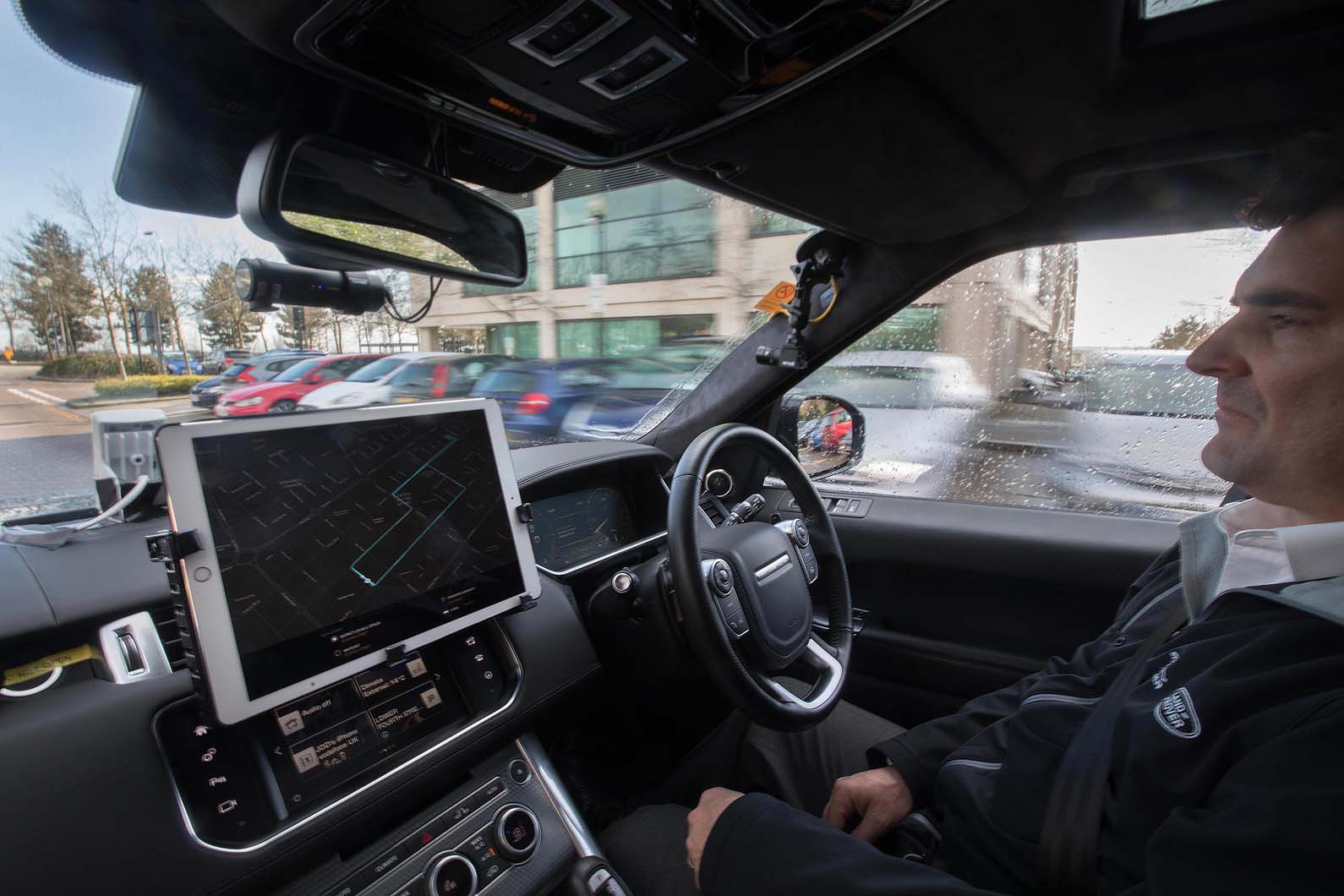 Braking lacked smoothness but otherwise the car performed perfectly. When we arrived at the car park (which remained open to the public), the Range Rover cruised around to its designated spot, before reversing and driving forward into the parking space. The only minor glitch during the whole exercise was failing to spot a traffic cone when reversing.

The Collaborative Parking exercise was just as impressive. Driving to the car park in a Ford Mondeo Hybrid, a tablet installed on the dash displayed a chequerboard of red and green slots showing the availability of spaces. As we parked, the green slot we occupied turned to red as the car used its GPS to update the map. En-route, the EEBL interacted with the Tata Hexa one car ahead. Although it was obscured by the F-Pace immediately in front, a warning flashed up on the screen alerting us when the Hexa driver braked hard. An ambulance used in the trial triggered the EVW several times. It’s position and distance relative to our car showing on the screen. The system easily picked it up 350 metres away, when it couldn’t be seen or heard.

The bigger the car's footprint...

(and the i-Pace exceeds the 2 meter width mark!), the more likely the car will run into other road users, simply because there is less precious road space to share. Reminds me of the discussion about designated cyclist lanes and leaving them enough space when overtaking. Weird to notice JLR's intention to come up with solutions with cars that are even wider than the driver (95% the car's only occupant) is tall - which means inching forward as if the driver were lying sideways across the road.

With Ford, Tata, Milton Keynes Council and Arup also involved, why is only JLR called out in the headline? Does your bias know no bounds?