Ssangyong has designed the world’s first touch-window system, allowing drivers and passengers to open and close a car's windows by touching them.

The brand, owned by Indian automotive giant Mahindra, says the public can expect to see the technology before the end of the year.

The car maker told Autocar that there will be "further procedures" such as verification and market studies to undertake before using the technology in mass-production models, but that it is considering introducing the system into a concept car at a motor show later this year.

Ssangyong said that this is one of many new technologies under consideration after being suggested by its researchers and employees.

Ssangyong boss Choi Jong-sik said: "The company will continue to develop next-generation products that will meet the needs of its customers while setting a new trend by encouraging creative ideas and innovative research."

While Ssangyong claims this is the first example of such technology, other manufacturers have previously mentioned similar possibilities. Last year, it was reported that Jaguar was working on windows that could be opened and closed by touching the glass, but the car maker did not put any timeframe on when it would make production.

Ssangyong is planning to launch three new models over the next three years, starting with an all-new Rexton large SUV, which rivals the Hyundai Santa Fe. It will also launch electric versions of its model line-up by 2020 and is currently testing an electric Tivoli. 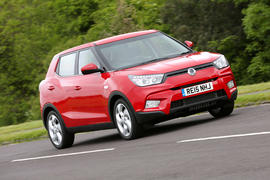 I'm a big fan of tech when it makes sense (I have keyless, adaptive cruise, 360 cameras etc). But I'm trying to think of any situation where this would be better than a switch?!
Wearing gloves = nope. Touching the glass by accident = annoying opening of windows. Windows fully open = need a close switch anyway. In use do you have to hold and touch the glass anyway as it moves down thereby even more awkward. Sorry SSangyong = fail
Straff 6 February 2017

And why call a car a name

And why call a car a name that sounds like Rectum? I suppose it's the same person that came up with the name Dacia Dustbin.
abkq 6 February 2017

No one ever asks for electric

No one ever asks for electric windows in the house, or electric seats, or mirrors ...
So why does a car interior have to behave like a gadget and not the living room?
View all comments (9)