BACK TO ALL NEWS
Currently reading: How the NEVS Sango could resurrect an old Saab plant
UP NEXT
Middle management: Revisiting the Renault Clio V6

How the NEVS Sango could resurrect an old Saab plant

A productive future for Saab’s storied factory in Trollhättan, Sweden, will hinge on the success of a six-seat autonomous shuttle.

The Sango has been designed and engineered in Trollhättan by Chinese-owned NEVS (National Electric Vehicle Sweden), which acquired Saab’s main assets when it went out of business in 2012.

The shuttle is scheduled to start trials in Stockholm in late 2021, operating under the SAE level-four classification for self-driving vehicles.

“Sango is designed to compete with private cars, not public transport, and will be a vehicle that people use, rather than own, and has been designed with flexible shared use in mind,” said project chief engineer Anna Haupt.

Although the Sango must undergo several years of trials before it can be fully operational, Haupt is bullish about its production future.

“The potential production of Sango is enormous. We are in a transition now as we move from internal combustion engines to battery-electric vehicles and we also see the switch to mobility services. The total production of mobility vehicles will be huge,” she said.

In the long term, NEVS is looking to Trollhättan as its source of Sango shuttles, but production volume and timings have yet to be disclosed.

Trollhättan has effectively been mothballed since NEVS bought the factory in 2012, with various plans to build electric versions of the Saab 9-3 for sale in China never coming to fruition. A plan for NEVS to mass-produce a solar-charged electric car called the Sion at up to 32,000 units a year for German EV start-up Sono Motors is on hold after the firm experienced financial difficulties during the pandemic. 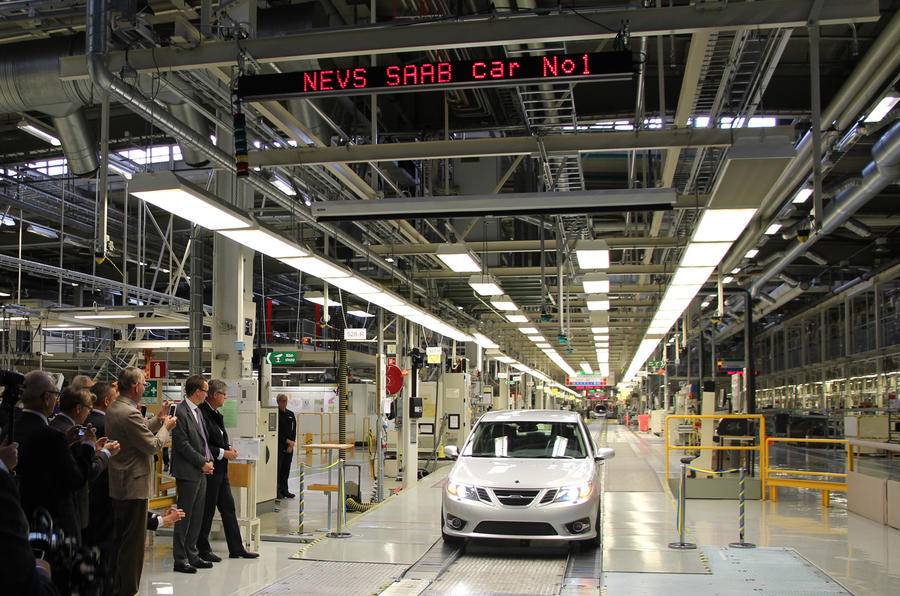 Chinese property company Evergrande bought the remainder of NEVS in June after an initial purchase of 51% in January 2019 for $930 million (£715m).

The change in ownership modified the NEVS plan based around Chinese production in Tianjin province. The Tianjin government was NEVS’ second shareholder after company founder Kai Johan Jiang.

NEVS told Autocar: “When the new owners came in, they decided to evaluate how the 9-3 cars applied to their long-term product strategy. Therefore, it was decided to not go to market.”

Evergrande is building a strong position as a potential EV maker, having also invested $2 billion (£1.54bn) in Faraday Future in 2018.

A source told Autocar that Evergrande has been given the rights to a significant number of property developments in China, each to include a car factory alongside commercial and residential properties. NEVS said it could not comment on Evergrande’s plans and is proceeding on its own, independent strategic course.

NEVS is more cagey about the future production of other models, possibly based on Saab concepts seen in online forums. However, it does not have the rights to use the Saab name.

Despite the lack of everyday manufacturing activity at Trollhättan, NEVS said resources have been spent on maintenance to keep the plant ready for a resumption of production. There are understood to be 700 people still employed at the plant, including 100 design engineers.

Investment in NEVS has been substantial since 2012, totalling $3bn (£2.31bn) in Sweden and China. But the company accepts further investment will be needed before recommissioning and retooling precede a restart and capacity is rated at 200,000 units a year.

Trollhättan is configured as a steel-stamping and welding plant. Haupt said there are “still a lot of advantages for Trollhättan plant has been mothballed since its Saab-making days steel, especially at bigger production volumes”.

Currently awaiting final approval from the Swedish government, the Stockholm trial will be a modest restart, with a small fleet of 10 vehicles expanding to 20 in a second phase. It will extend over 90 square miles, with the Sango operating at up to 44mph.

Each Sango shuttle will have a steering wheel – hence level four rather than level five autonomy – and initially be accompanied by a ‘safety’ driver.

Similar in length to a Volkswagen Golf but wider, the Sango has four in-wheel electric motors and four-wheel steering that promise an efficient and manoeuvrable package with six seats that can be configured for different uses. The motors are sourced from Protean, a UK start-up bought by Evergrande in 2019.

As well as developing the shuttle, NEVS is working on a full suite of autonomous mobility systems, including a ride-hailing app, Okula. NEVS is using autonomous systems from AutoX, a Chinese start-up whose Robotaxi service began operations in Shanghai last month with 100 self-driving cars in a limited suburban area.

for crying out loud

so an electric Phoenix platform 9-3 is no longer happening either? I was sure i'd read that was going to replace the electric gm 9-3. Is this shuttle bus any different to all the others we keep reading about? Aren't Westfield doing something like that too? Everything's a complete mess. It's infuriatng that billions have been found to fund NEVS' going around in circles, but nobody would pony up anything for SAAB, who had something actually ready. I am, and always will be, convinced that gm had no intention of SAAB continuing in business

so an electric Phoenix platform 9-3 is no longer happening either? I was sure i'd read that was going to replace the electric gm 9-3. Is this shuttle bus any different to all the others we keep reading about? Aren't Westfield doing something like that too? Everything's a complete mess. It's infuriatng that billions have been found to fund NEVS' going around in circles, but nobody would pony up anything for SAAB, who had something actually ready. I am, and always will be, convinced that gm had no intention of SAAB continuing in business

Agree entirely. Like most multi nationals, they play a game of chicken with local and national governments. Every time a model needs replacing or a new factory is thought to be desirable they effectively blackmail the authorities for grants, tax incentives , deals etc. They do it again and again every few years. Then finally someone says enough. So they pull out,  not a big loss to them as they put little of their own into the plant to start with, leaving local communities decimated.

I wonder when the last time any major manufacturer actually built and equipped a new factory with their own money, without incentives.

What absolute mugs we all are to think this is an acceptable way to do business.