The company’s ‘PONS’ programme is described as a ‘mobility ecosystem’, which has been developed in response to a growing demand to reduce emissions in cities around the world. According to NEVS, the 1.3 billion cars in operation globally are used just 5% of the time.

The system revolves around a self-developed autonomous shuttle called Sango. Designed to offer flexibility for its users, the self-driving electric vehicle has a low floor, sliding doors on both sides and a bright, spacious cabin with six movable seats.

Although the Sango is designed for ride sharing, rather than personal ownership, it has been developed to offer some of the benefits of vehicle ownership. The company’s vice president of mobility solutions, Anna Haupt, said: “We started by looking at why urban citizens have such strong desire to use their own cars rather than public transport, even if it means sitting in traffic jams for hours each day. The reason is privacy: in your own car, you feel safe, secure, relaxed and free.”

The movable seats allow the interior to be configured in three different ‘settings’: private, social and family. Privacy walls also feature and can be raised to divide the cabin into four individual compartments, or lowered to allow four people to travel facing each other. The ‘family’ setting comprises six seats arranged into three rows, more like a conventional MPV. Future versions will be equipped with climate control, ventilation systems and air filters.

Haupt said: “We realised that, to be able to really benefit from autonomous technology, we had to design a vehicle that would not only be an enabler for shared vehicles, but also for shared rides. How do you combine privacy with sharing? That was one of the main challenges to overcome.” 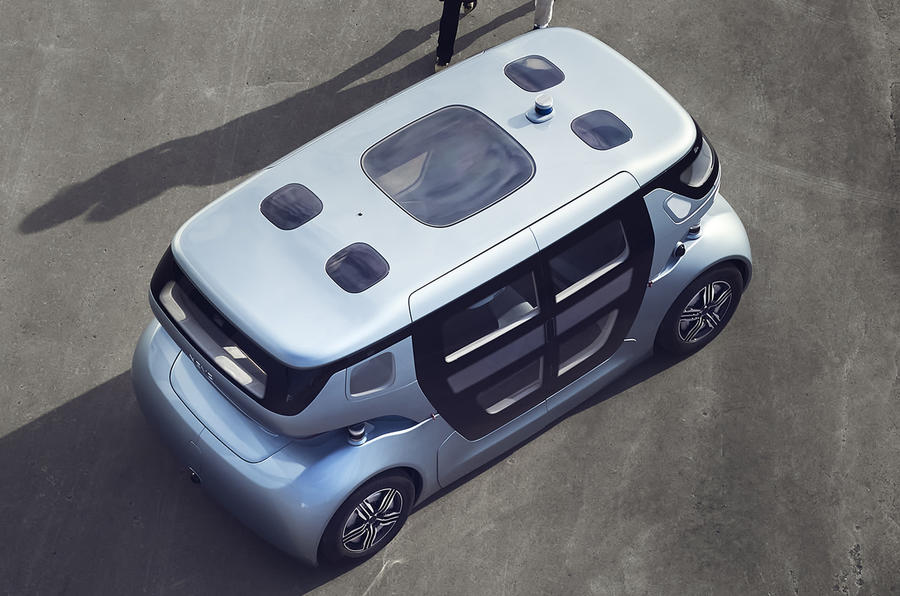 The shuttle's 62kWh battery pack allows for a range of up to 186 miles per charge according to the WLTP cycle, and ca be charged from empty to full in five and a half hours. NEVS says: "Range is adapted to the area of use and is of less importance for users because the vehicles will not be privately owned. Sango charges its batteries when needed and whenever convenient at any time of the day."

Top speed changes according to the specified driving environment, but forthcoming versions will have a top speed of 36mph, and NEVS claims 44mph is "enough for most cities".

The Sango shuttle is compatible with “any of the self-driving software systems available”, but NEVS has partnered with Californian self-driving start-up AutoX for the system’s launch in Sweden. AutoX was chosen for its “unique software-hardware integrated approach, safety and scalability, and ability to navigate in dense urban environments.”

AutoX’s AI Driver offers level four autonomous capability, which means it does not require regular input from a human driver, but can be physically overriden in the event of an emergency. Generally, these vehicles are limited to a top speed of around 30mph in a clearly defined urban area, which means they are mostly used for ride-sharing services.

The Sango is equipped with a roof-mounted Lidar camera, along with four side-mounted Lidars and five side-view cameras for full 360° coverage.

PONS users can request a vehicle via an app, while a fleet management system will be used to monitor and ‘optimise’ the Sango fleet throughout the city.

NEVS will now trial the PONS system with a pilot scheme in Stockholm, which will make a fleet of 10 ‘robotaxis’ available for use in the city. Daniel Helldén from the city’s traffic division welcomed the initiative: “Like other European cities, Stockholm faces challenges with vehicle emissions and traffic congestion. Therefore, we welcome new ideas that share our vision of a greener city and less use of cars."

A fleet of Saab 9-3s were recently spotted arriving at a Swedish port, and were believed to be linked to the scheme, but a NEVS spokesperson claimed they were simply "carrying technology for testing". Haupt said: "We cannot reveal details about what is under the skin, but we can confirm that these vehicles exist, they were brought to NEVS Trollhättan site and they are for testing and the development of our next generation of products and services."

A Sango prototype has been completed and is currently being used to test the PONS system at NEVS’ Trollhattan headquarters. Owned by Chinese industrial giant Evergrande, NEVS - National Electric Vehicle Sweden - employs around 100 people and is headquartered at the ex-Saab factory, having acquired the manufacturer’s assets upon Saab's collapse in 2012.

The firm recently launched a ride-sharing service called NEVS Share in Stockholm, which allows car owners to make their car available to others while it's not in use. The vehicle's key is placed in a box inside, and can be accessed via a smartphone app to allow one-off round trips.

Autonomous cars to be tested on 188 miles of UK roads​

Analysis: When will self-driving cars be a reality?​

Today Greece opens up her borders to other EU countries but Sweden will remain one of the few exceptions. So much for Sweden's well publicised relaxed attitude towards lockdown then, during June, Sweden held the highest Covid-19 related death rate per capita of any country in the world.

So if the timing to promote ride-sharing transport wasn't already bad enough, the fact it's being promoted by a Swedish company who's about to start a pilot scheme in Stockholm?  Even Greta might think twice about signing up to this trial.