BACK TO ALL NEWS
Currently reading: Google patents 'sticky bonnet' for pedestrian impacts
UP NEXT
New 2022 Porsche Cayenne to bring design overhaul

Technology uses adhesive layer on bonnet to bind to impacted pedestrians, preventing them from being flung back onto the road
Share
Open gallery
Close
Share story

Google has patented the creation of an innovative ‘sticky’ car bonnet, which is designed to prevent a person from being flung off the bonnet and on to the road in the event of a collision.

The system targets this ‘secondary stage’ of a pedestrian impact, where most fatalities occur, suggesting it could drastically reduce the number of pedestrian deaths if it were to be successfully integrated into vehicles.

The patent has been published on the USPTO (United States Patent and Trademark Office), revealing its technical details. It shows that a car’s bonnet is covered in an adhesive layer, finished with an outer shell that can be painted to match the rest of the body. The outer shell prevents debris from sticking to the adhesive, but in the event of a pedestrian hitting the surface, this outer shell breaks to allow the person to bind to the adhesive below. 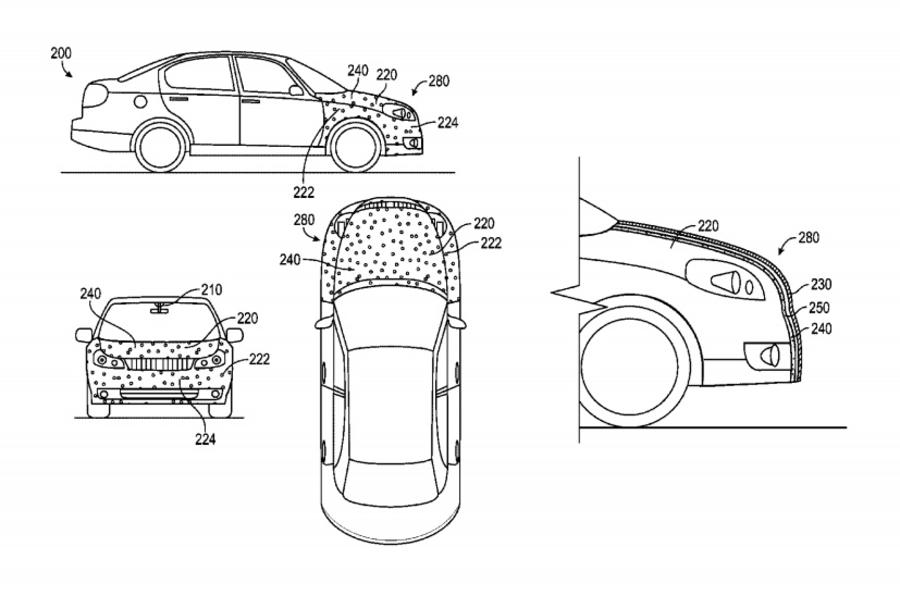 The technology is primarily designed for use on driverless vehicles - of which Google is a key player in advancing automotive technology with its fleet of autonomous vehicles - but it could have the potential to be adapted for use with other automotive platforms. Some reports even suggest the system could be adapted to cater for collisions with other road hazards including bikes and animals.

Google hasn’t released any official information about the technology at this stage, so we’re yet to find out if it will ever be used on a production vehicle. However, the level of detail and research demonstrated in the patent application confirm it’s something the technology giant has clearly invested time and money in.

Google isn’t the only company researching advances in pedestrian safety, both Volvo and Jaguar have also shown an interest in improving road safety in this way, with Volvo’s external airbags – mounted to the car’s windscreen – one example of the systems it has developed.

I don't like the idea of someone stuck on my hood when I am driving.
There should be an override function where it detects cell phone use of the pedestrian about to be hit.
Richard H 24 May 2016

Checks date, its not 1st April!

Put a big spike on the front, then no one will step out in front

That means I'll be driving around with half a dozen bodies stuck to my bonnet, how will I be able to see. Google have not thought this through.
View all comments (10)