BACK TO ALL NEWS
Currently reading: General Motors axes Australia's Holden brand
UP NEXT
EV chassis could provide a lifeline for niche car makers

The Holden brand will be axed by parent company General Motors (GM) by the end of 2021, ending the storied Australian brand’s 164-year history.

The company, founded in Melbourne in 1856, has been owned by GM since 1931. It dominated the Australian and New Zealand car markets for decades, but its market share slipped dramatically in recent years and it began to post heavy losses. In 2017, GM shut down Holden's manufacturing operations in Australia, leaving the firm selling a mix of imported and rebadged Opel and GM machines.

Julian Blissett, GM International Operations’ senior vice president, said that Holden would be “retired” because GM felt the investment required to make it competitive in the Australian and New Zealand markets outweighed the likely return. The American car-making giant said the decision was part of its efforts to "transform its international operations".

“Through its proud 160-year history, Holden has not only made cars, it has been a powerful driver of the industrialisation and advancement of Australia and New Zealand,” said Blissett. “Over recent years, as the industry underwent significant change globally and locally, we implemented a number of alternative strategies to try to sustain and improve the business, together with the local team.

“After comprehensive assessment, we regret that we could not prioritise the investment required for Holden to be successful for the long term in Australia and New Zealand, over all other considerations we have globally. This decision is based on global priorities and does not reflect the hard work, talent and professionalism of the Holden team.”

Blissett said GM’s would focus its future growth strategy in Australia and New Zealand on speciality vehicles, working with a number of partners.

GM boss Mary Berra added: “I’ve often said that we will do the right thing, even when it’s hard, and this is one of those times. We are restructuring our international operations, focusing on markets where we have the right strategies to drive robust returns, and prioritising global investments that will drive growth in the future of mobility, especially in the areas of EVs and AVs."

In response, Australian prime minister Scott Morrison said that he was "disappointed but not surprised. But I am angry, like I think many Australians would be." He added: "Australian taxpayers put millions into this multinational company. They let the brand just wither away on their watch. Now they are leaving it behind."

GM Holden’s managing director, Kristian Aquilina, pledged to give the brand a "dignified and respectful wind-down" before operations cease in 2021. He added: ““Holden will always have a special place in the development of our countries. As Australia and New Zealand grew, Holden was a part of the engine room fuelling that development.

“Today’s announcement will be felt deeply by the many people who love Holdens, drive Holdens and feel connected to our company, which has been with us for 160 years and is almost ubiquitous in our lives."

GM is aiming to refocus its international business around its "core markets" of South America, the Middle East and South Korea, with Blissett adding: “In markets where we don’t have significant scale, such as Japan, Russia and Europe, we are pursuing a niche presence by selling profitable, high-end imported vehicles – supported by a lean GM structure."

GM has also announced that it will sell its manufacturing plant in Thailand to Chinese firm Great Wall Motors and withdraw the Chevrolet brand from that country.

A brief history of Holden 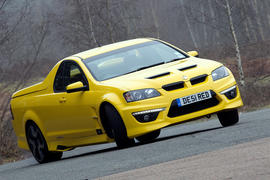 Quite simply the best two-seat pick-up that £50,000 will buy you. The Maloo is a blunt instrument that, if nothing else, will put a smile on your face

James Alexander Holden, who emigrated to Australia from Walsall, England in 1852, founded his eponymous company as a saddlery in 1856. His grandson, Edward Holden, joined the firm in 1905 and, due to his interest in cars, it expanded into automobile repair work in 1908. That progressed to more extensive coachbuild work, and Holden expanded after the war to produce car bodies for the Australian market for both Ford and GM.

In 1931, GM bought Holden and merged the firm with its Australian arm. That quickly led to Holden opening a second factory in Port Melbourne. After the Second World War, the Australian government pushed an initiative to develop an Australian-designed and built car, with the resulting vehicle – simply called the Holden – launched in 1948.

Holden soon dominated the Australian market – accounting for around half of all sales in the country in the late 1950s – helped by a range that included the V8-powered Monaro, a range of Utes and the Commodore, its most popular model that launched in 1978.

But Holden's market lead in Australia slipped as Japanese and Korean rivals began to enter the market. In 2013 GM announced Holden would cease production in Australia in 2017, due to the high costs of manufacturing in the country.

2017: The end of car production in Australia - what went wrong

It is a shame that another

It is a shame that another name has died, agree re what others have said that the vxrs should have retained their Holden badges in the UK and EU, would have been more interesting, and it would be good for the name to get used for performance related models, but it's unlikely. GM does seem to make a habit out of mis using and losing the brands they must have spent a fortune acquiring in the first place.
Chris C 17 February 2020

This is all a bit mystifying...

There may have been problems selling it on as a going concern, eg employing staff in unwanted facilities, but why didn't GM sell Holden to PSA as a repeat of Vauxhall?

Why didn't they sell the Thailand plant to their Chinese Asian region partner SAIC (although there is already an RHD MG plant there)?

I get the arguments that Australians want Japanese reliability but in the past Holden rebadged Suzukis  - I also get the issues of adverse exchange rates and limited ongoing government support but is this down tol GM pride or basic incompetence?

but is this down to GM pride or basic incompetence?

The learning to come

There's a lesson here for Vauxhall. Since 2014 Holden had to soldier on with rebadged GM product, either LHD models US ones expensively reengineered for RHD or LHD Korean-made products made in the former Daewoo plants or elsewhere in Asia. The problem was that attitudes had changed and Asian cars, whether Japanese, Korean and one assumes eventually Chinese became big enough and strong enough for Australian duty. Holden had no place to go as it no longer had the larger cars at lower price points. Competition killed Holden, not GM.

As for Vauxhall; it can't really rely on domestic British goodwill, jingoism - even in post-Brexit Britain won't be enough. Luckily they have, in PSA, an owner that understands that good product, well-made for the local market at a good price is key. Vauxhall just needs to hope they don't get cast-offs in the way Holden did as it atrophied.

As for Vauxhall; it can't really rely on domestic British goodwill, jingoism - even in post-Brexit Britain won't be enough. Luckily they have, in PSA, an owner that understands that good product, well-made for the local market at a good price is key. Vauxhall just needs to hope they don't get cast-offs in the way Holden did as it atrophied.

You seem to be totally unaware that Vauxhalls are simply re-badged Opels. They used to be built on sh*te GM platforms (or GM/Fiat ones in the case of the old Corsa) and from the latest Corsa onwards theyll be built on PSA platforms (in future PSA/FCA ones).