BACK TO ALL NEWS
Currently reading: Chinese government slashes subsidies for electric vehicles
UP NEXT
New Ferrari Omologata revealed as one-off V12 supercar

The Chinese government has announced that it's slashing subsidies on electric vehicles (EVs) before removing them entirely in 2020.

This has been done in an effort to get manufacturers to rely on technical innovation for success rather than financial assistance. The subsidies have helped China's EV industry to grow rapidly to maturity in the past decade.

EVs must now have a range of at least 155 miles to qualify for any government subsidy, up from 93 miles previously.

In China, official ranges for EVs are produced under the NEDC test cycle, which has now been superseded in Europe by WLTP due to its often unrealistic results. For example, the Nissan Leaf is rated at 235 miles NEDC and 168 miles WLTP – a decrease of 28.5%.

China's finance ministry also has told local bodies to remove any incentives of their own. This could lead to overall help for consumers reducing by up to 67%.

While some Chinese car makers, such as BYD, state that they were prepared for the change, others have said they might have to increase their prices.

Bloomberg quotes a Bernstein analyst, Robin Zhu, as saying: “While the incumbent OEMs will see some earnings damage, we consider Nio the most vulnerable of all.

There has been a strong drive towards electrification from the Chinese government as it looks to lessen its environmental impact. More than half of global EV sales are made in the country, which has the world's largest overall automotive marketplace.

It's predicted that there are currently more than 480 different EV-making companies in China, ranging from small-scale operations producing super-cheap microcars with lead acid batteries to global conglomerates such as Geely and the Volkswagen Group. 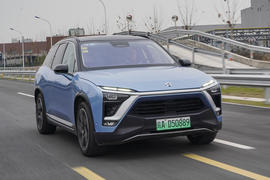 Interesting... Expect we'll see a sudden drop in EV sales, long term though, can see where theyre coming from. Might inadvertently help the Chinese problem for companies like Land Rover (fingers crossed)

Interesting... Expect we'll see a sudden drop in EV sales, long term though, can see where theyre coming from. Might inadvertently help the Chinese problem for companies like Land Rover (fingers crossed)

Long term you will only be able to purchase EVs and no ICE. They have strict laws about what % of vehicles should be EV each year, so they have both the stick and carrot (subsidy) approach working. EV sales will not fall as they are mandated to rise and car manufacturers will be given large fines or have there license to sell in China revoked if they do not comply.