The Bentley Continental GT3-R gets a racing revamp, but how does its more potent sibling fare on the race track?
Open gallery
Close

The Bentley Continental GT3-R is Bentley's most driver-focused road car and the GT3 racing car is its steroidal sibling.

One little letter, that’s all. Oh, and a hyphen. One car here is a Bentley Continental GT3, the other a GT3-R. Just how big a difference could there be? Even once you’ve looked at them, bigger than you might possibly imagine.

Clearly one is a road car, the other a racer, but, perversely, it’s the street machine that has the ‘R’ in its title. Both are based on the Continental GT, but while one has merely had its claws sharpened somewhat, the other is as a starving wolf to a snoozing Labrador. My purpose is to drive both cars, see how different the racer is to the road car and try to understand how it got that way.

The GT3-R will be familiar to Autocar readers. Production of the £237,500 monster has now ceased, but many will recall that it’s a stiffer, lighter, more powerful Continental GT, with no rear seats, carbonfibre door cards, titanium exhausts, lightweight wheels and carbon-ceramic brakes as standard. But, with four-wheel drive, a fully equipped interior and air suspension, it was not light. Indeed, on our scales it weighed 2285kg. Nevertheless, with its 4.0-litre V8 tickled up from 521bhp to 572bhp, it scorched to 62mph in 3.7sec, which is some achievement for a car weighing more than the heaviest Mercedes-Benz S-class. 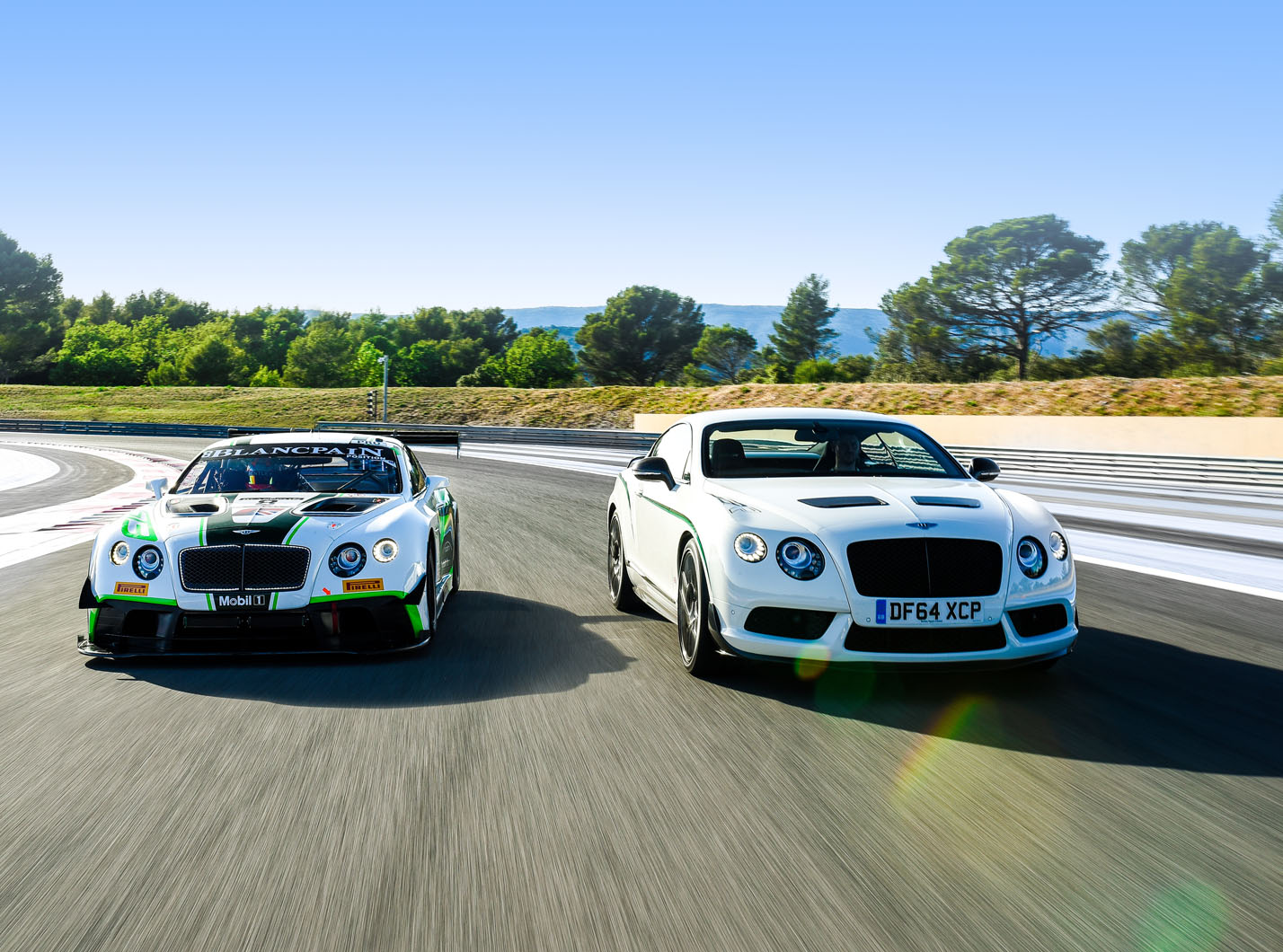 Two things struck me on the way to Silverstone to meet its racing self. First, how much I liked the car, and second, how much more even than that I’d have liked it had Bentley gone further with it. In the reduction of weight, far more so than the increase in power, Bentley had discovered a path to an all-new level of dynamism and driver involvement. But having set out with confident stride and eyes set on the horizon, it appears to have got halfway, sat down and had a picnic.

Never will you feel this more than when you see the GT3 in the pit lane. Given that the GT3-R weighs 2285kg and has already been on a diet, what would you estimate the racer to weigh? Just 1285kg. Staggeringly, it’s so light that it now has to carry ballast to reach its minimum homologated weight. Most car makers get pretty stoked when they shed 50kg from a car’s kerb weight. But an entire tonne? How do you do that?

The specifics you will see in the panel below, but you start by gutting the interior and replacing the steel and aluminium body panels with carbonfibre. Then you bin the entire four-wheel drive system and replace the heavy eight-speed torque converter automatic gearbox with an ultra-light Xtrac racing transmission. Some weight has to be added – you can’t have ceramic discs in a GT3 car and you have to have a big roll cage and fire systems.

Even so, and to give an example of the kind of savings on offer, consider that the door of a fully trimmed Continental GT with a double-glazed electric window weighs 54kg. The same item in carbonfibre and Perspex? Just 7kg. And another thing: a Continental GT carries 72 ECUs in standard specification, but its racing equivalent has just two. The result is a full-sized racing Bentley that weighs exactly the same as a Volkswagen Polo GTI. 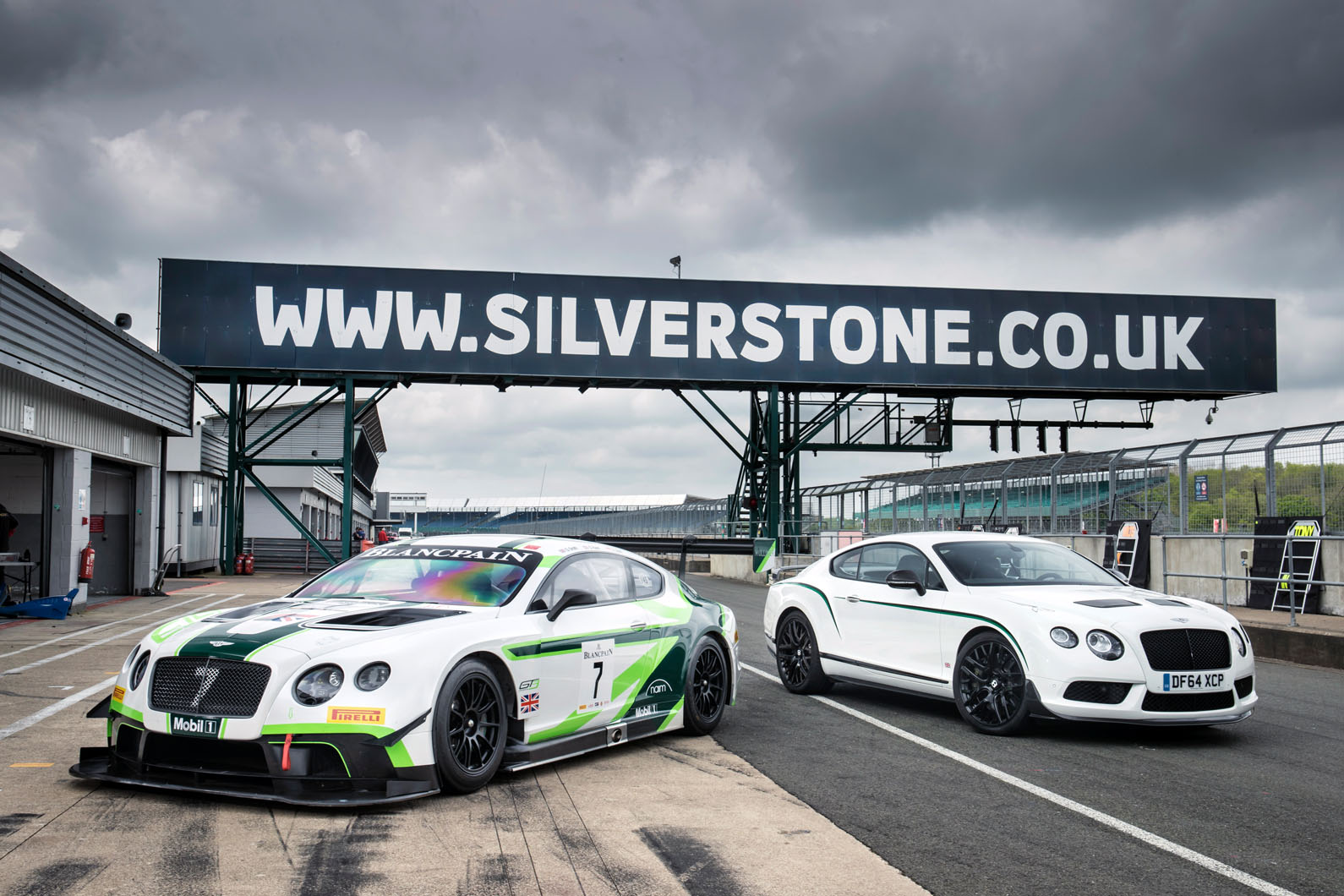 But of course, that’s only part of the process. The race engine actually produces about the same amount of power as the GT3-R’s motor, but only because the regs force it to breathe through restrictors, otherwise it would be past 600bhp, over the hills and far away. The biggest difference with the motor is its location. Incredibly, it has been moved from entirely ahead of the front axle line to entirely behind it, making this technically a mid-engined car. There’s racing suspension, race-spec brakes and an FIA bag tank for the fuel.

However, the really big changes are to the aerodynamics and structure. Working with Malcolm Wilson’s M-Sport operation that designed, developed and now builds the GT3 car, Bentley was able to control the airflow over and under the body in such a way as to generate up to 800kg of downforce, allowing the car both to brake and corner at 2g. But it needs the stiffest possible structure to work upon, which is why the torsional rigidity of the Continental GT has been more than doubled to more than 100,000Nm per degree. To put that in some kind of parallel perspective, that’s about five times stiffer than the structure of a Lamborghini Murciélago.

Inside, the silhouette of the Conti’s dash remains, but save for a couple of delightful touches, such as Mulsanne shift paddles and leather pull straps for the doors, this is a cabin as focused on the track as the GT3-R’s is on the road.

Despite its turbos, this is one of the bestsounding GT cars there is, emitting an asphalttrembling thunder even at idle. There’s a clutch, but it’s used for leaving the pits and nothing else.

The car is quick but, with the power-to-weight ratio of a standard Ferrari F12, its straight-line performance is entirely understandable. In every other regard, it is on a different level even from the most hyper of hypercars, McLaren P1 and LaFerrari included. For that, you can thank its extreme lightness (it still seems weird to say that about a Bentley), its mammoth Pirelli slicks, its race suspension and, of course, all that aero. 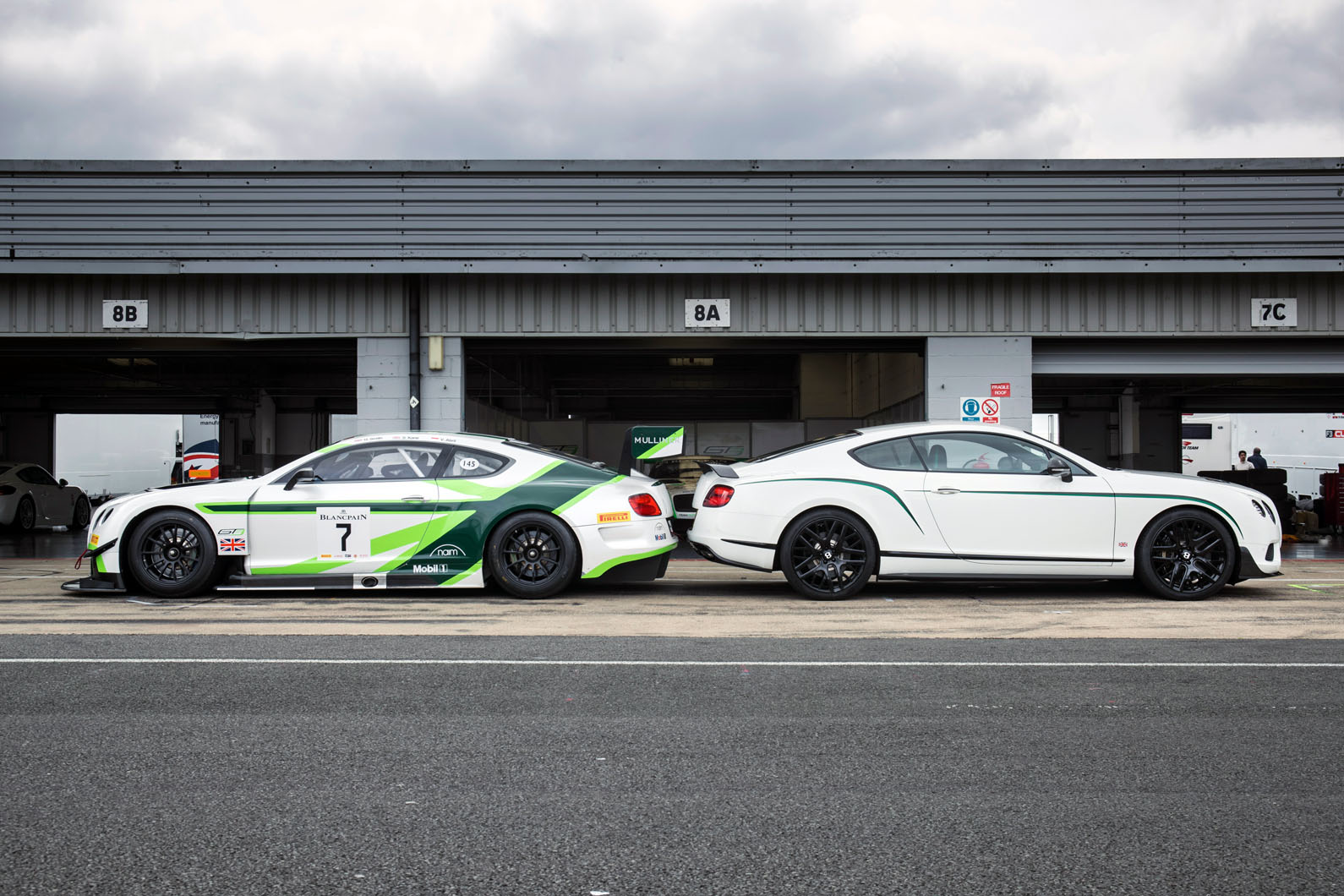 An example: at the end of Silverstone’s Hangar Straight it’s doing about 170mph, yet you brake past the point you would in a road car doing perhaps 50mph less. And here’s the thing: such is the aero effect at 170mph that there is not a pressure the right foot of a 6ft 4in man can exert on the brake pedal that will even tempt the ABS into life. Then, as the speed washes away and the downforce disappears exponentially, so must you ease back on the pedal while at the same time ensuring you’re still braking hard up to the apex.

Kerbs you might merely kiss or avoid entirely in the road car simply become an extension of the track, and the GT3 rides them, well, like a Bentley. The race car will take full throttle over horrendous saw-tooth kerbs and barely notice them; in the road car you’d fear for your wheel bearings, half shafts and dental work.

But despite the pulverising grip, the GT3 is remarkably user-friendly. I wouldn’t call it easy to drive, because things tend to happen quickly when you’re dealing with forces like this, but if you dial back the traction control and get on the power early, you can correct ensuing slides simply enough. With its long wheelbase and a set-up designed to ensure both professional and gentlemen racers can get the most from it, the Bentley is probably the most confidence-inspiring GT3 car I’ve driven.

Does it feel related to the Continental GT3-R? Distantly, yes. It shares an outline and some elements of the noise, and both feel immensely strong and immaculately constructed. But what they have most in common is that both feel like Bentleys, albeit from opposite ends of the spectrum. There is nothing anathema about a lightweight Bentley racing car; we’ve just not seen one for a while. But now that it exists and shows what can be done, I hope the next time Bentley decides to do a GT3-R, it doesn’t stop halfway but pursues the theme all the way to its rightful, lightweight, driver-focused and potentially awe-inspiring conclusion.

They should ban TC and ABS

...when German cars are better built than hand made ones? Name me any that are. Old Rollers were and Aston's. They weren't.
Porus 7 August 2016

I meant weren't. Too much old English ale for a Punjabi man.
kcrally 7 August 2016

Bentley are for girls and bad

Bentley are for girls and bad posers. No longer hand made but a run of the mill production German overweight voiture.
beechie 7 August 2016

No longer hand made but a run of the mill production German overweight voiture.

I reckon the Mulsanne is about as hand-made as any car has been in the last fifty years and it has little in common with any of its parent company's models.g