BACK TO ALL NEWS
Currently reading: Analysis: Can car makers really save the planet?
UP NEXT
Testing the UK's newest circuit in a Porsche Cayenne Turbo GT

Analysis: Can car makers really save the planet?

After a history of chasing CO2-based profits, we assess whether the automotive industry can help the cause
Open gallery
Close

Climate change has become an overarching global issue and the need to reduce CO2 emissions to halt global warming is now (largely) accepted as scientific fact. And there’s no escaping that the car industry is a major contributor to CO2 emissions. For example, the Volkswagen Group estimates that, through its operations and the cars it has made, it is responsible for around 1% of the world’s total carbon emissions.

It might sound audacious, even somewhat hypocritical, to hear industry bosses say they want to take the lead in cutting CO2 emissions. But that’s exactly what Volvo boss Håkan Samuelsson did at the recent launch of the XC40 Recharge, the firm’s first electric car.

“Despite decades of political climate summits and very bold emission targets, CO2 levels are still increasing,” said Samuelsson. “Something else is needed to turn this tide – and we believe the answer must be action from the business community.”

Similarly, Hyundai’s R&D chief, Albert Biermann, said recently: “The car industry needs to play a big role to find solutions to the issue of global warming. We want to be a big player on this planet, so we take it as our responsibility to come up with sustainable solutions.”

Undoubtedly, the current move to mass electrification by the car industry has been sparked primarily by increasingly tough emissions targets from the EU and other regulators. Those targets are largely a product of the 2016 Paris Agreement – signed by 195 nations – which aims to limit global warming to 1.5deg C above pre-industrial levels.

The EU has mandated tough average fleet emissions targets for car manufacturers, starting with a 95g/km limit in 2021. For car manufacturers to meet those goals, they are essentially forced to produce – and sell – electrified cars.

But the CO2 produced by a car’s powertrain is only part of the story. Volvo says that such emissions account for only 59% of a car’s total lifetime CO2 footprint. Another 36% come from CO2 produced in the manufacturing supply chain, with the remaining 5% due to operations such as distribution and servicing.

So, many car firms are aiming to go further, planning to cut CO2 emissions across the entire production chain. For example, Volvo wants to become a climate-neutral company by 2040. It has set a series of goals to achieve this, including a 40% reduction in each car’s life-cycle CO2 footprint by 2025, at which time it is aiming for its global manufacturing network to be climate neutral.

For example, Volvo has said it will use blockchain data-sharing technology to trace the source of the cobalt that suppliers CATL and LG Chem use in its lithium ion batteries to ensure the raw materials are sourced responsibly. It will also show buyers an average lifetime carbon footprint for each future model. 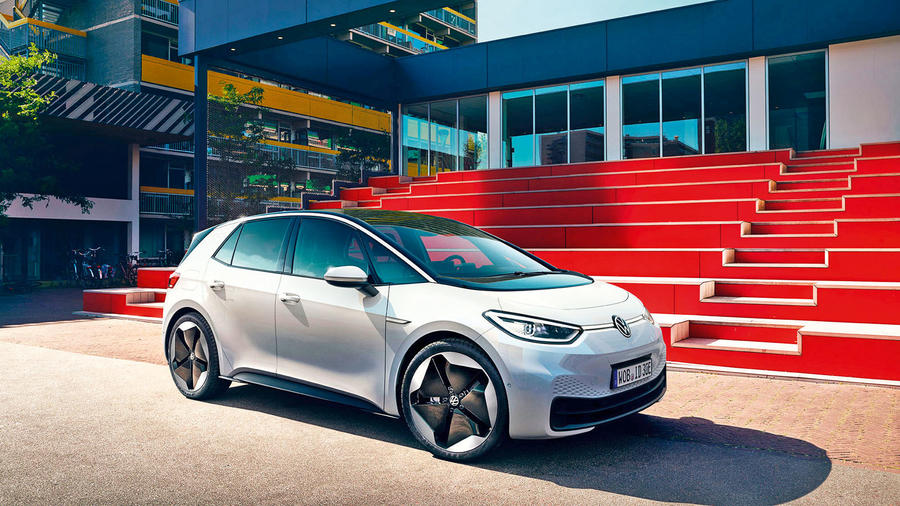 Like Volvo, Volkswagen has set itself a CO2 -neutral target, but by 2050, and it has proudly advertised the ID 3 as its first carbon-neutral car, with the Zwickau factory, where it is produced, running entirely on renewable energy. Numerous other car firms have made changes so their plants run purely on renewable energy and are cutting emissions in other ways.

It’s not hard to see the contradiction of companies built on producing carbon-emitting cars now pushing to be seen as leaders in the move to reduce those emissions – especially in the case of Volkswagen, given its actions unearthed in the Dieselgate scandal.

Volkswagen’s argument is ‘who else can?’, a view rooted in that stat about it accounting for 1% of the world’s carbon emissions. Ralf Brandstätter, the firm’s chief operating officer, said recently: “Our big size means big responsibility.” And he insists that the push towards emissions-free mobility will become the “guidepost” of Volkswagen’s future action, adding: “It will be our compass in future. It’s our mindset.”

Samuelsson said Volvo is also making the reduction of emissions part of its core, comparing it with another driving force of the firm: “We made safety a part of our company and we should do the same with sustainability.”

Samuelsson added that the increasing public drive towards sustainability meant the car industry could suffer if it doesn’t respond.

He said: “Economic growth, new technology and competition is not necessarily bad. It should not be seen as part of the problem but as part of the solution for a really sustainable future.

“We believe the ability for people to move should not be seen as a negative. It should be seen as a positive. We should be careful about restricting freedom to move – but we should make it sustainable.”

That’s also key: although it will cost the car industry billions to achieve CO2-neutral production and motoring, the cost of not doing so could ultimately be vastly more.

According to Biermann, that desire to appeal to eco-conscious customers could begin to drive electrification faster than the legislation that has kicked it off: “Eco-friendliness has become a big area of competition with battery-electric cars and plug-in hybrids. In areas such as Europe, this will be a very enjoyable fight – and it will be good for the customers who will go for an electrified car.”

Electric cars: how environmentally-friendly is emissions-free?

Come off it. The car industry had been dragged screaming into paying heed to environmental issues and now it's trying to use them as a bit of PR puff. If it wasn't for legislation and Elon Musk, they'd still be trying to persuade everyone to climb board gas guzzling SUVs ... oh they are, aren't they, and very successfully.

The problem as always is: you're only asking car brands!

What all you unimaginative, inside-the-car-box thinking journalists and the SMMT don't realize: there's a HUGE chance for the UK auto industry in greening personal mobility. Better still, a Next-Gen EV can make a Tesla look completely "been there-done that"...

looking at this question is that the planet does not care whether humans inhabit it or not, according to science humans have only been here a short while. If the Earth formed at midnight and the present moment is the next midnight, 24 hours later, modern humans have been around since 11:59:59pm—1 second...like the terminator film stated "in a panic they tried to pull the plug"...it'll be too late by then.  We have Venus as an example of what the planet Earth itself has to look forward to.