BACK TO ALL NEWS
Currently reading: Honda to stop selling combustion engines globally by 2040
UP NEXT
Prodrive P25 is uprated Subaru Impreza 22B with 400bhp

Honda will end production of combustion motors by 2040 as it embarks on a wide-reaching drive to achieve total carbon neutrality by 2050 and to advance the development of its zero-emission powertrain solutions.

Company president Toshihiro Mibe detailed a series of ambitious objectives at a press conference in Japan today, where he solidified the brand's commitment to leading "advancements which will be made in the areas of mobility, the power unit, energy and robotics".

By 2050, Honda aims to achieve carbon neutrality across "all products and corporate activities", which will see it shift focus predominantly to developing environmentally friendly powertrains and overhauling its supply chain to ensure products are "made from 100% sustainable materials".

The brand had already confirmed it would offer exclusively electrified passenger cars in Europe by the end of 2022, but is now solidifying its global electrification strategy for the coming years. By 2030, Honda plans for 40% of its sales to be pure-electric or fuel cell (FCEV) vehicles, rising to 80% by 2035 and 100% by 2040.

Specific goals for the European market have yet to be fully detailed, but a strategic partnership with General Motors will accelerate electrification efforts in North America, while a total of 10 new Honda-badged EVs will be launched in the Chinese market "within five years" - the first of which will be the production version of the e:prototype shown at Shanghai last week. 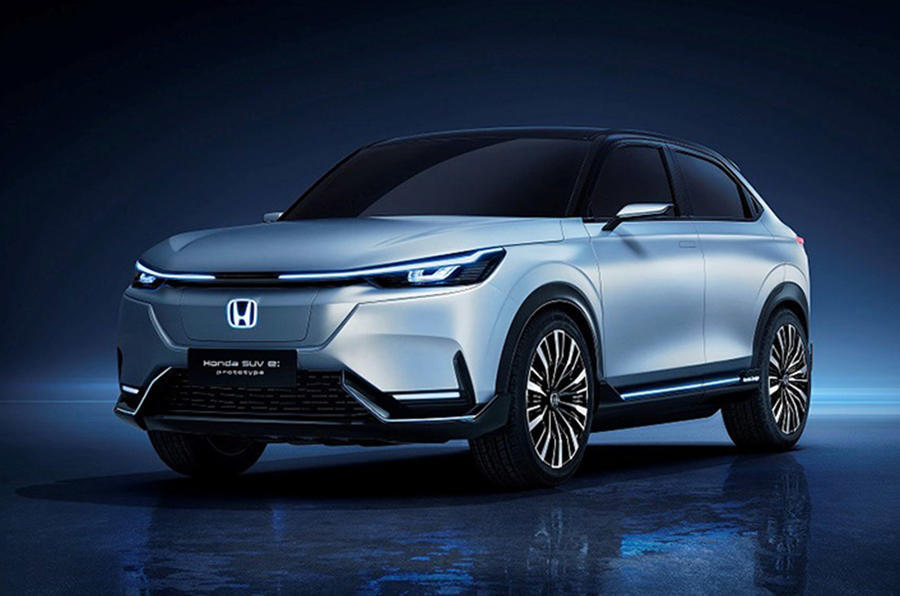 Honda has also confirmed that in the second half of the decade, it will launch a range of EVs atop its new 'e:Architecture' platform. The models will arrive in the US first, before being rolled out to other regions, likely including Europe.

The Cruise Origin self-driving EV being jointly developed by Honda and GM will begin testing later this year and is destined to arrive on the Japanese market in the mid-2020s. This partnership will also help Honda to expand its FCEV line-up.

To "secure the high competitiveness" of its next-generation electric vehicles, Honda is also conducting research into the viability of solid-state batteries - which offer increased capacity over conventional lithium ion units - and plans for the technology to arrive in production vehicles in the second half of the 2020s.

Also outlined in the press conference was a goal to eradicate fatal collisions involving Honda motorcycles and cars by 2050. In line with that, Honda vowed to include 'omnidirectional ADAS' systems to all models launched in "developed countries" by 2030, and to enhance the intelligence of its advanced driver aids.

Overall, the manufacturer will invest the equivalent of £33.5 billion in research and development over the next six years - and it has pledged to take "necessary measures, including alliances" as quickly as possible.

Mibe said: "As of last fiscal year, we enabled Honda R&D to focus on the research of advanced technologies, and we are conducting research on leading-edge environmental and safety technologies for the realisation of a society that aims for zero environmental impact and a collision-free society.

"Also, we are making progress with research on technologies which will expand mobility into the third and fourth dimensions, into the skies, the ocean, outer space and the area of robotics. We will strengthen our original research of technologies by ensuring optimal allocation of resources into the area of advanced and cutting-edge technologies."

Log in or register to post comments
Andrew1 25 April 2021
So from 2030 they will only sell to Africa and South America?
KEVINkevin 24 April 2021
So the people who make the best ICE in the world IMO are to stop making them. Must be a lot of money in electric engines. Judging by how much E-cars cost that must be right.. Ducati are going down the right path.
Peter Cavellini 24 April 2021

I think this is mainly aimed at Cars and road transport we use daily, to stop makes all engines would be shear folly.