Our best moments from the Goodwood Festival of Speed 2014

Goodwood special moments. Everyone who attends Lord March's motoring garden party has one, whether it's watching Lewis Hamilton and Sir Stirling Moss coordinate the world's largest 'selfie' on Sunday afternoon, or viewing the endless parade of exotic metal work its way up the hill.

So here are ours: the Autocar team's favourite personal moments from the Festival of Speed...

Seeing the Jaguar F-type Project 7 was a high point for me, but it was an equal pleasure to meet the guys from Elemental and get a guided tour around the Ariel Atom-rivalling RP1. It looks like another lightweight British sports car we'll be hearing a lot more about.

It's a testament to the name Ariel has built up for itself that by the end of Friday, the firm had already sold a dozen of its new Ace motorcycles. With a skeletal design reminiscent of the Atom, the £20,000 bike comes powered in basic form by a 1.2-litre water-cooled Honda engine with 173bhp.

A swift series of tasty donuts right in front of Goodwood House was my highlight of the Festival. I was fortunate enough to be strapped into the co-driver’s seat of Dani Sordo’s Hyundai i20 World Rally Car on Sunday morning when, after taking two corners of the course completely sideways, the Spaniard decided to entertain the crowds with some high-speed pirouettes.

Standing around at the top of the hill after my afternoon run in an Aston Martin V12 Vantage S, pretending to fit in amongst the overalled-up racing drivers, and feeling glad to have avoided doing any damage on the way up. Then Tiff Needell turns up and does a perfect two-pedal, 20mph drift around a ribbon of road barely wider than his BMW M4 - and the crowd cheer in appreciation. Ever the entertainer.

I'd prepared for my drive in the 3.5 R with a week in an Atom 245. That got me used to the kind of fierce acceleration that Ariel has become famous for, but this latest, hardcore Atom is on another level entirely. It exploded from the line, all 350bhp taken from its 2.0-litre VTEC engine and transferred to Goodwood's tarmac. 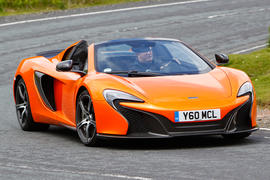 It's always a privelige to be asked to ride up the 1.16-mile Goodwood hillclimb route. It's even more special to be able to do it in Lamborghini's new Huracán, powered by a 602bhp naturally aspirated V10 engine. My driver was Lamborghini's own Max Venturi, who had the job of piloting this £180,000 supercar through the tight turns of the Goodwood estate.

Those are some of our favourite moments from this year's Festival of Speed. Let us know your thoughts in the comments section below, and click here to read more Goodwood Festival of Speed news.

Thursday is huge now too

26 June 2014
I was there today, and was amazed at how big Thursday has become. Apart from there not being the race cars charging up the hill or aerobatic displays, it was just as good as going on the other three days.

30 June 2014
I had to laugh when the guy riding it said he thought it was a bit expensive. No more PR for him. It looked as though the seat needed raising a bit too.

30 June 2014
I do hope Steve Cropley didn't actually put any money on Seb taking the hill record last weekend in the end !
I did say that it would be a tough ask...whilst his time was good, 3 seconds is a country mile to make up on such a short distance.
Nick may just have created something which is unbeatable.

1 July 2014
next year i think wire-cutters are in order...straight through the PA system power. Get rid of the inane waffling and crappy commentary and it would be a whole lot better show.