BACK TO ALL NEWS
Currently reading: Revised BMW X3 shown in Geneva
UP NEXT
How the Bugatti Chiron became the first 300mph road car

More frugal engines are at the heart of the facelifted BMW X3, which gets its public debut at the Geneva motor show this week.

This refresh comes at a time when the mid-size SUV is a consistent strong seller for BMW, with global sales of 157,298 units in 2013 representing an increase of five per cent over the previous year.

The most significant changes are under the bonnet, where the latest-generation turbodiesel engines combine more power and better economy than the outgoing cars. The X3 can be ordered with a six-speed manual gearbox or eight-speed automatic transmission, depending on the chosen engine.

BMW's rear-wheel-drive X3 sDrive18d is equipped with a 1995cc TwinPower turbodiesel four-pot unit that produces 148bhp and 266lb ft. When fitted with a six-speed manual gearbox, this variant returns a claimed 56.5mpg on the combined cycle and emits 131g/km, the best in the range.

Three other diesel variants come with all-wheel drive as standard. The X3 xDrive20d produces 187bhp and 295lb ft, returning a claimed 52.3mpg on the combined cycle and emitting 143g/km of CO2.

The X3 xDrive30d is powered by BMW’s 2993cc inline six-cylinder TwinPower turbodiesel and generates 254bhp and 413lb ft. Claimed combined fuel economy for this variant, which is only available with the automatic transmission, is 47.9mpg and CO2 emissions are put at 156g/km.

In the flagship X3 xDrive35d the same engine puts out 309bhp and 465lb ft,  accelerates from 0-62mph in 5.3sec and hits a top speed of 152mph. This variant’s claimed combined fuel consumption of 47.1mpg and CO2 emissions of 157g/km are improvements over the outgoing model.

Exterior changes include a new, sleeker headlight design, a new surround for the kidney grille and fresh front and rear bumpers, all of which bring its look more into line with that of its big brother, the X5.

Apart from a one millimetre increase in length that takes it to 4657mm, the second-generation X3’s basic dimensions are unchanged, meaning it is 2089mm wide and 1678mm high, with a wheelbase of 2810mm. Boot space is an unchanged 550 litres with the rear seats up, increasing to 1600 litres with the bench folded.

Inside, there are some modest tweaks such as additional chrome detailing, a revised centre console, new cupholders and a standard-fit leather steering wheel. New options of exterior colours, upholstery designs, interior trim strips and wheels will be available.

The tweaked X3 also gets a raft of new driver assistance and infotainment features including an uprated navigation system that has an integrated touchpad on the iDrive controller. Other highlights include an automatic parking assistant, a head-up display and a high-beam headlight assistant.

In the UK, which doesn’t get three petrol options that form part of the overseas line-up, the X3 is available in SE, xLine and top-spec M Sport trim levels.

The latter includes some technical changes such as bespoke aerodynamic styling, 19in alloy wheels, an M Sport leather steering wheel, sports suspension and BMW's torque vectoring Performance Control system. M Sport models carry a £1500 price premium over xLine variants, which are in turn £1500 more expensive than the base SE cars. 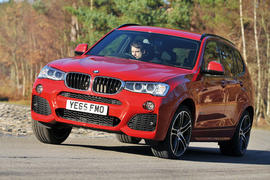